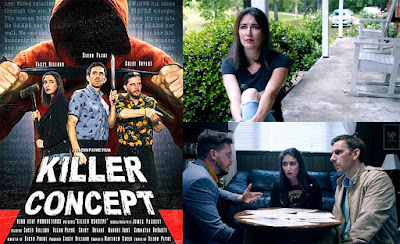 Having its European premiere at this year’s FrightFest was Killer Concept. The film is written by Casey Dillard and directed by Glenn Payne. The two also star as two thirds of the trio of main protagonists in the movie, Dillard as Holly - a true crime writer who is trying to work on the production of an independent movie, Payne as Mark - collaborating as the photographer/cinematographer on the film and, rounding out the three main characters is Coley Bryant as Seth, the would be director and fictional co-writer of the film.

The film takes place over the space of a few days and is mostly the heated but very funny development meetings between the three protagonists as they try and brainstorm an idea for a new, independent movie about a serial killer. Their unique selling point being that it’s based on a batch of recent killings in their own town which haven’t been solved yet, with the killer still at large and possibly ready to commit more crimes.

Now it’s basically a slasher/serial killer comedy but with the emphasis mostly being on the comic elements of the story and, I’ll be honest, it’s going to be hard to write about this without giving away everything about the central twist but I’ll tip toe around it and just reveal that, from the very early stages of the movie, the film reveals that the actual real life serial killer is one of the three working on the film. This is something which, to be fair, I guessed just from reading the summary blurb on the FrightFest ticket website but, unlike the writer and director, I won’t reveal to you here just which one is the serial killer, even though they do spell it out right from the get go.

And, honestly, if you’re looking for a gory slasher film with lots of killings, then this isn’t necessarily going to give you what you want. There’s lots of talk about bloody carnage but, very little of that on the actual screen. Instead, the film focuses on the humour to be found as the main characters talk over the tropes of exploitative slasher movies and fundamental horror film elements, bouncing off each other in really witty and funny ways. I was smiling through a heck of a lot of this movie and I think Killer Concept was my second favourite film of the whole festival this year (Gaia being my favourite, reviewed here).

And it’s well put together visually as well. There’s a slasher movie style stalking theme at the front end of the movie and the camera movements combined with slow zooms pulling the viewer in are really quite elabourate while also being quite efficient and cool. Without saying too much about that first scene, some of this spills into the rest of the movie... although I think the way the first scene is shot is supposed to have a slightly different look to the rest of the movie (you’ll find out why fairly early on into the first few minutes). There are some excellent montages in one scene of the face and upper body of the serial killer in close up, where the person in question is just staring vacantly into the camera where three very similar shots of that person wearing different clothes and with a different background are cut together, which really helps jettison the comedy mood just when the director needs it to.

There’s a point where the movie become just a little bit more serious with the stakes a little higher than they were before and the nice thing about this is, once it kind of embraces that tonal shift, over the last ten minutes or so, it becomes a different kind of extension of the narrative, just in a slightly more off kilter style and, the abruptness of the ending of the movie may seem at first a little rushed. However, thinking about it, it’s a nice way to end the film and the way in which it suddenly turns into a, just slightly more sombre affair, is something the film-makers seem get away with, I think.

There are some really great comedy moments too, such as the realisation from one of the three that the killer’s victims all have names that could be flowers, like Heather... and this is something the killer obviously didn’t realise also, being as it’s just a bizarre coincidence. And there’s a lovely follow up when the killer is picking victims via a dating app and when a girl turns out to have the name Daisy, it then becomes like a green flag as the next choice.

The one thing that puzzled me a little is the killers constant rewatching and attentive listening to the songs of the 1957 TV movie The Pied Piper of Hamelin. I really didn’t get the reason as to why this movie was somehow informing or inspiring the killer, to be honest. The cynical part of me is saying the film’s copyright has lapsed or something similar and it was possibly the cheapest thing they could get. I’d like to think that there’s more to it than that though... I just couldn’t figure out what.

However, be that as it may, I have to say I had a really good time with Killer Concept and I’d recommend this to most fans of horror or slasher movies (the latter of which are really just thrillers in my book but, what the heck, I know some people think those are horror films so, yeah). I’d definitely revisit this one again so I hope it comes out on Blu Ray at some point because it would make a really nice thing to programme in an all nighter of similarly themed movies. A nicely put together film with some very funny moments. This one is a big thumbs up* from me.

*if I had excessively large thumbs.