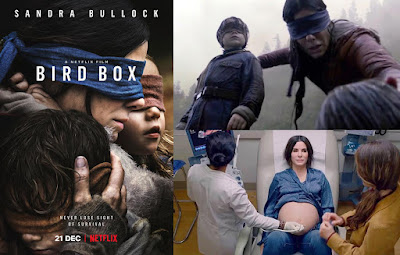 I’ve been hearing about Bird Box for some time and Twitter was full of it when it was released back in 2018. I was reluctant to see it as it didn’t have a cinema release and I was hesitant to watch stuff for free before the coronavirus pandemic (the more things don’t get released in a proper, distanced cinema venue though... and the less they are released as a proper Blu Ray, then my reluctance to bother paying for a different venue increases... cinema equals big experience and shop window, Blu Ray equals the actual product you can hold in your hand... don’t try and fob people off with this digital “from the ether” rubbish, it’s not the real thing, end of story). And then, of course, there was the Bird Box challenge, which consisted of people trying to travel or drive long distances while blindfolded, causing a fair few accidents in the process is my understanding and prompting a certain distancing to this behaviour from the evil studio involved in the production of the film. Personally, when it comes to blindfolds, I’d rather take the Nine And A Half Weeks challenge myself but, hey, to each their own.

Other than that, though, I knew absolutely nothing about Bird Box other than it starred Sandra Bullock, who seems to me to be a fine actress. I’ve not read the source novel (although I think I will need to now because certain elements of the film seem to have been left deliberately ambiguous and maybe they weren’t so much in the book?) so I can’t tell you how close it is to that but, I can say it’s a fine film.

It starts off very strongly too, with Bullock’s character Mallory telling two five year old children they are going on a long, perilous journey where they will not take their blindfolds off and if they do, she will hurt them. This is a grim set up and, indeed, the premise of the film is quite a downer, as we see the small family making their way to a boat to go down the river to a possible sanctuary. We then flash back to five years before, at the start of the events which lead to this, where we have the single but pregnant Mallory and her sister going to hospital to check up on her incoming sprog. They ignore the news that, in various countries, there have been devastating mass suicides among the people for the last half a day. Then, as they leave the hospital, it starts where they are and there is pandemonium. Mallory’s sister kills herself after they crash their car but Mallory manages to get to relative safety in a house with some people, including the two male leads for the film, the less than likeable Douglas, played by John Malkovich... and Bullock’s potential romantic interest Tom, played by Trevante Rhodes.

The problem is... there are things out there. Things you can’t really see but, if you happen to glance in the direction of one (often indicated as an invisible presence by leaves swirling about and the words of long dead loved ones calling out to a person to look at them) you will either kill yourself or, in the case of a select few humans (usually the already mentally unbalanced ones), you will align yourself with whatever is doing this and try to compel, by force, any other humans to look and die. And it’s these rogue human elements which do the most harm in this movie, as they’re less easy to spot or control and, since a survivor is likely to be blindfolded when out in the wild, it makes them easy prey as opposed to these human sympathisers who can see what’s going on. All the survivors have as an extra help is the birds in a box or cage, as the title suggests. Birds go frantic whenever one of these creatures is near although, to be fair, not so much is made of this in the movie version, at least, to warrant this as the title of the work, in my opinion.

And it’s really not a bad little sci-fi horror film. It’s not that scary, truth be told and, it is a little predictable but it has a nice structure which flashes back and forth between the journey Mallory is now on with the two kids and the various incidents along the way which happened over the five years which get her to that point. And there is some nice foreshadowing to the audience of events which have happened but we have not been shown yet, in the form of things like a child’s toy suddenly making it clear that not both of these kids are Mallory’s (which we’d kinda figured out but it’s made implicit which one isn’t hers before we are shown the how and why in a flashback scene).

And it’s a nice, entertaining slice of post apocalyptic movie making done right... I’d put it up there with the classics of the genre and far surpassing films which almost but, didn’t quite, get a similar premise right... such as The Happening. Also, it does what a lot of these kind of films do, something which a lot of zombie apocalypse films especially seem to pride themselves on doing (or rather not doing) in that it leaves the antagonist manifestation or whatever the heck that’s doing this completely unexplained. You never have a sense of what or why on this thing and that really helps serve the story because it a) doesn’t get dulled down with having to overly explain it all and b) makes for more drama as the humans can try and work their way around the mystery.

So, yeah, all in all I’d say Bird Box is a pretty good movie and I’d certainly recommend it for fans of post apocalyptic science fiction and, to an extent, fans of certain kinds of horror films too. I’ve now had to purchase an expensive and hard to get (in the UK) but brand new and unused Blu Ray on demand for my dad because, frankly, he loves Sandra Bullock movies and that would be the only way he’d get to see this (shame on certain companies for not making it in a more accessible format like this in the first place). But yeah, good little movie, a shame about the way in which it’s been released (which is becoming the new normal and it really shouldn’t be allowed to be).