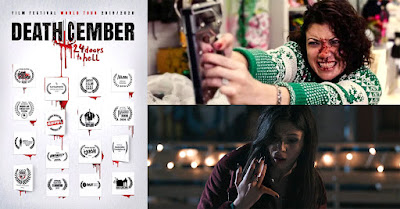 A fairly quick shout out for a 2019 Christmas movie called Deathcember. It’s basically a bit like The ABCs Of Death movies in that it’s a collection of short films based around Christmas death (and sometimes horror) by a variety of international directors, some of them quite famous such as Ruggero Deodato, Andreas Marschall, Lucky McKee and Pollyanna McIntosh. The film is advertised as being 24 films but there are actually 26 short movies in this one, as there are also two additional movies mid and post end credits.

The film starts off with the camera swooping over a computer generated snowscape which finds a cemetery with borders that are shaped like the Star of David. The camera wanders around from various gravestones on which credits for the movie are found before moving up and out of the cemetery to take in the film’s title and then going into a cabin. Inside the cabin, which includes an upside down Christmas Tree (the anti-Christmas?) the camera starts moving around a room and then it will stop on an object. The outline of an advent calendar door will then appear around that section of the screen before opening and allowing the camera to swoop inside the door to access each segment.

As you would expect from this kind of portmanteau movie, it’s a hit and miss affair but, I’d have to say on this one that most of the segments are at least interesting and it’s never a dull affair. I’d say more hit than miss but, at the same time, don’t expect too many of them to really knock your socks off. There are some nice ideas though, such as a greedy, advent calendar chocolate binging child finding himself suddenly turned to chocolate and inside an advent calendar himself, as his sister then eats him. There were some definite highlights for me too...

All Sales Fatal by Michael Varrati was a nice one of an unsatisfied customer trying to return her Christmas purchase because she’s changed her mind but the store won’t refund her without a receipt. Anger wells up and she and the sales guy get suddenly involved in a brutal fight to the death before the, admittedly obvious, punchline moment of that particular story. X-Mas On Fire by Florian Frerichs is not such a great idea but it is quite entertaining, depicting a heist gone wrong. It also has a nice few moments of Reservoir Dogs parody in it. Bob Pipe’s door, The Hunchback of Burg Hayn is a black and white silent movie and nicely captures the style, albeit with a big dollop of humour, of a 1920s Hollywood production. Andreas Marschall’s door Pig is probably going to be big with the strange modern brand of feminists. When a man is marked up with a big P on his jacket, mimicking Fritz Lang’s movie M, a brutal retribution is visited on a guy by a group of vengeful women. However, when he is unmasked and one of them exclaims to the others that it’s the wrong guy... the brutality continues under the guise of “There are no wrong ones.”

There were some wrong ones for me though and, one of the segments, a spectacular looking science fiction piece called 3rd December 2389AD, mainly failed for me because I just didn’t understand what the heck was going on in it at all. But that’s probably more to do with me than the quality of the actual film. Probably my three favourites in this collection were Crappy Christmas (terrible title) by Juergen Kling, December The 19th by Milan Todorovic and Five Deaths In Blood Red by Ama Lea.

Crappy Christmas is an animated short in the style of a claymation movie. It includes what is certainly the most inventive death of the film (and of most movies, I suspect) which I will only describe as the ‘viagra catapult cock through the head’ death, involving a Bishop... and I’ll leave that there but, yeah, you need to see it. December The Nineteenth is a short tale about two girls about to embark on a lesbian relationship, who have their first date, as it were, by going ice skating together at night. However, the first time skater is so bad at it that she ends up causing the other to first break one finger before she accidentally slices off the fingers of her other hand with her skates, eventually ending up with her ice skate accidentally embedded in the other girl’s face before meeting her own accidental death. It’s stylish and funny. Five Deaths In Blood Red is exactly as it sounds, a mini giallo parody and it really captures the style of the early to mid-1970s gialli by the likes of Sergio Martino in its too short running time. There is some nice music in this segment too by Eduardo Daniel Victoria, which hovers between slightly out of kilter, 1970s US slasher mode but also some lovely giallo homages in its make-up which really help push the comparison.

And that’s me pretty much done on Deathcember. I think  the notes I took while watching this one were longer than the review this time but looking at them, there’s not much else I’d want to elabourate on, I think. The movie is exactly what you’d expect from these kind of ‘film collective’ movies and it doesn’t scrimp on the violence/goriness and even adds some very occasional nudity. It’s not fantastic but it’s certainly entertaining enough to ensure that the nearly two and a half hour running time breezes by and it continues to hold the interest. Definitely not a bad film to watch if you want something both violent and funny to check out over the Christmas period.