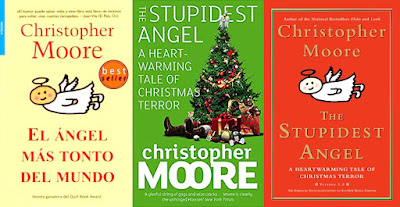 Warning: Well, I guess you can’t help a few spoilers.

So once again Christmas time is upon us and, also once again, I scrabble around and struggle to find a book to read in December to review. I’ve gotten pretty tired of the Christmas murder mysteries and Christmas horror books I’ve been reading in recent years... mostly because they have a track record of being disappointing. So instead, I stumbled upon a second hand ex-library copy of a book that sounded kinda off-beat and fun called The Stupidest Angel, by a writer I’d not heard of called Christopher Moore. Well, I can tell you that after I read this, I’ve made it my personal mission to read various others of this guys books because, this accidentally became an occurrence of an incident which is becoming frequently rarer as I get older and less accepting of what passes for writing these days... I found a newish fiction writer I actually like a lot.

Subtitled A Heart-Warming Tale Of Christmas Terror, the novel starts off with a mostly accurate Author’s Warning to the reader... “If you’re buying this book as a gift for your grandma or a kid, you should be aware that it contains cusswords as well as tasteful depictions of cannibalism and people in their forties having sex. Don’t blame me, I told you.” So that’s pretty much a good advertisement or recommendation for a book in itself, I reckon.

After the opening warning, just the first part of the first sentence... “Christmas crept into Pine Cove like a creeping Christmas thing...” woke me up to the fact that I might be in the hands of a literary genius and as the story and, more importantly, the breezy and insanely witty writing style of the author began to take a hold of me, I was even surer that this was, indeed, the case.

I mean, there are some real gems of sentences in here like... “searching for a truly meaningful moment of Christmas commerce” or “They rang their bells like they were going for dog-spit gold at the Pavlov Olympics.” This was really good stuff and all these examples were just from the first few pages so, yeah, pretty soon I realised I couldn’t just keep reaching for the notepad on my iPhone every time one of these word gems appeared... or I would be at it until the New Year (which New Year, I’m not guessing).

The setting of the novel is a fictional Californian town called Pine Cove and it tells the story of some of the inhabitants... a local cop named Theo, his large chested ‘off-her-meds’ Barbarian Queen of an ex-exploitation B movie actress called Molly, a nice gal called Lena, a pilot called Tucker, his talking Fruit Bat Roberto and a whole host of others... some of whom we’ve apparently met in other books from the same author as minor or major characters, making up a shared Chris Moore universe (so yeah, I’m practically forced at gunpoint now to go back and read his other works... bugger).

And, of course, there’s a kid called Joshua and the titular character Raziel, the unstoppable, unkillable Terminator-like stupidest angel who has been given the task of finding a kid and performing this year’s Christmas miracle, if he can work out a good one to do.

And that’s where it all goes wrong for everyone, after Joshua sees Lena accidentally kill her nasty ex-husband, dressed in a Santa suit, with a badly timed shovel through the throat. Joshua, of course, assumes that Santa is dead and so, when Raziel decides he’s the kid he’s going to help, Joshua wishes Santa alive again. However, instead of raising just ‘Santa’, his lack of clarification on where the body is buried means that, without Raziel realising until much later in the book, he accidentally raises all the dead in the nearby area. And when I say raise the dead, I’m talking about brain eating zombies who have a plan to feast on the living before all heading off to visit the new IKEA store because, as Mr. Moore explains in the book, “No one knows why but, second only to eating the brains of the living, the dead love affordable prefab furniture.”

And it’s an absolute blast. I don’t want to reveal too much more about the contents of the book but I had a real good time with it and grew to love the characters... especially crazy lady Molly, ‘Warrior Babe Of The Outland’, who is a dab hand with a katana and her wonderful ‘narrator’, who only comes out when she’s not sticking to her medication, apparently. If I had one complaint about the book, it’s that it finished too early... I would have loved it to be an absolute doorstop and carry on for another few hundred pages but, I guess the humour and cleverness of the writer’s phrasing is epic enough and probably works better in slightly smaller portions.

Apparently, there was a reissue of this book suffixed with the title Version 2.0 which includes an additional short story at the end... so I guess I’ll be reading that version next Christmas in addition to whatever else I can find for the 2022 Christmas read. In the meantime, all I can say is The Stupidest Angel by Christopher Moore is absolutely fantastic and I will (and have already, as it happens) recommend it to all my friends. Absolutely give this one a go.