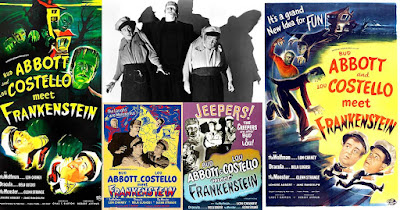 Wilbur Seeing You
For The Last Time

Lon Chaney Jr: I know you'll think I'm crazy, but...
in a half an hour the moon will rise and I'll turn into a wolf.

Lou Costello: You and 20 million other guys!

Abbot and Costello’s movie career was flagging somewhat, from what I can remember. I can’t find my reference for that now but I’m pretty sure the highly successful comedy duo were nearing what would have been a natural break in their careers, possibly for good. And then somebody came up with the idea for Abbot and Costello Meet Frankenstein which, despite Lou not initially liking the script, they at least agreed to try.

So three years after the cessation of Lon Chaney Jr’s contract with Universal, following what everybody thought would be the final film to star three of the classic franchise monsters, House Of Dracula (reviewed here), he was re-employed to make this film, which has Abbott and Costello playing two postal workers, Chic and Wilbur. Chaney would obviously replay his role as Lawrence Talbot, aka The Wolf Man and the film would also see the return of both Count Dracula and the Frankenstein monster. It’s kinda ironic given the title, I suppose, that Abbot and Costello don’t actually get to meet Frankenstein himself, of course, just the monster which became synonymous with this fictional name but, yeah, I guess we can forgive the marketing people on the movie for this grave error, to some extent at least.

Bela Lugosi returned to the role he made famous on stage and also on screen in the 1931 version of Dracula (reviewed here) and, it was a somewhat belated but welcome return for sure. Although he’d played other vampire roles for other studios over the years, such as the truly great movie The Return of The Vampire (reviewed here), this was only his second and final time playing the famous Count, brought to the world from the writings of Bram Stoker.

Also returning for another shot at his role was Glenn Strange, who was playing the Frankenstein monster for the third time, after his turns as the famous character (after Boris Karloff, Lon Chaney Jr. and Bela Lugosi had all had a go at the role) in House Of Frankenstein and House Of Dracula. That being said, when he damaged his ankle on set, Chaney Jr once more doubles up for him in a few shots in the movie, most noticeably the scene where he throws one of the two leading ladies out of a window to her death. It’s interesting to note that, for the first time, Glenn Strange actually gets a few lines in the role, reminding the audience that the monster can, in fact, talk when he puts his mind to it. He could also laugh, I guess because he ruined a lot of takes of certain scenes reacting to the improvisational shenanigans Lou Costello brought to his role when playing scenes opposite him.

The two leading ladies are Lenore Aubert and Jane Randolph, who both feign romantic interest in Wilbur here for different reasons... as a way of getting them to their own personal goals. Randolph is an insurance agent, Joan, trying to track down (as is Chaney’s Lawrence Talbot) the big packages containing Dracula in his coffin and the Frankenstein monster. She thinks Wilbur knows where they are because they are accused of stealing them somehow due to some earlier, well performed tomfoolery in the first third of the picture.

Dracula’s interest, along with that of Lenore Aubert’s character Sandra, is to revive and make a slave of the Frankenstein monster. His actual motivation as to why is left unclear but,as he says, he needs a different brain inside the fleshy casing. The brain of someone who has... “No will of his own. No fiendish intellect to oppose his master.” Which is why Sandra is trying to entice Wilbur to her castle laboratory... it would be fair to say she doesn’t want him for his body, just his brain.

And, it’s a hoot. There are some nice set pieces and, although this wasn’t quite the first film to fuse comedy with horror, it’s certainly the one that shows you how it can be done right and, the simple answer is... to play the comedy straight. That is to say, the three classic monsters are taking the proceedings of the film absolutely seriously. The characters are respected and their playing out a typical Universal horror movie plot. And then you add the comedy around and with them via the two lead actors, Bud and Lou. And it works really well and certainly the audiences thought so. This film completely revived the two comics’ ailing career and saw them continuing on in movies for quite a while. The box office receipts were very healthy on this, especially seeing that the film was the second cheapest picture Universal produced that year but then was their second biggest money maker of the year. That’s a good return and it’s a shame this didn’t also help the ailing careers of the classic monsters, who would not return on screen for Universal for many decades.

It’s been said that the film should not be treated as canon with the other Universal monster movies that came before it and not be seen as, for instance, a direct sequel to House Of Dracula, because of the ridiculous jumps in continuity. After all, the Frankenstein monster and Dracula (played by John Carradine in the previous two installments) had met their end and, also, Lawrence Talbot had been cured of his lycanthropy in the previous film... only to be living with the wolf man’s curse again in this one. My personal take is, especially considering the actors in the roles, that there certainly is continuity for precisely the same reason. I mean, have you looked at the continuity between films for those last few? It’s atrocious and so the lack of logic in the continuation of those characters here is actually very typical of the franchise... so it obviously is part of the whole bunch of them, as far as I’m concerned.

There are lot of good things about the movie. Abbot and Costello work nicely here and are fairly amusing. Costello breaks the fourth wall a few times by mugging at the camera and it kind of makes the audience complicit and engaged with the storyline, to some extent. When he glances directly into the camera to push a point or impress himself by accidentally pulling a table cloth off a chest without disturbing any of the objects on it, it almost feels like you are interacting with the film and it’s a real plus in terms of the.... well, I was going to say credibility of the characters but, maybe I should just say, it’s a real plus in arousing your sympathies and making sure you are rooting for the right characters to come out on top.

There are also several bad things in the film, mostly in terms continuity, it has to be said. One big problem for me is that, in a scene where Lugosi is biting Lenore Aubert’s neck to bring her completely under his spell, we can clearly see him reflected in a mirror. Even in the last movie (and certainly in the first when Lugosi initially played the role) it was always established that a vampire casts no reflection so, yeah, the internal logic of the creatures goes out the window with this final film in the series. Which is a shame but, as I said, the Universal monster movies were not exactly known for their tight consistencies.

So, yes, a big box office hit which, I might go so far as to say, saved the careers of Abbott and Costello but which saw the demise of the monsters although, it would not quite be the last of Universal’s monster movies. There are still a few more reviews for me left to write in terms of the classic Universal monsters. For instance, an uncredited voice appearance of Vincent Price turns up in the punch line to this movie as The Invisible Man and, although Price would not go on to play him for a third time, The Invisible Man would meet Abbot and Costello in an upcoming film. As would, of course, another iteration of The Mummy and, yeah, I will be covering those films too plus, of course, the fifth and last of the classic, big Universal franchise monsters, who would only ever appear opposite Bud and Lou on their TV show. I’m talking of course about the trilogy of movies top lining the Creature From The Black Lagoon, the first of which you will find reviewed here. So, yes, join me soon for some more Universal monster shenanigans.