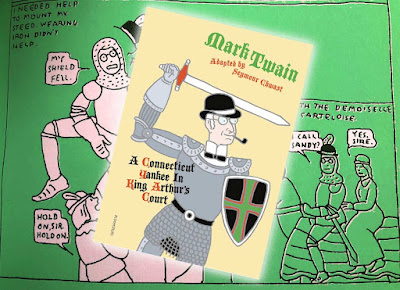 I’ve never read Mark Twain’s A Connecticut Yankee in King Arthur’s Court. I remember seeing the Bing Crosby movie (one of many versions made) and also the kind of ‘inspired by’ 1970s movie The Spaceman And King Arthur (which I recently found out was called Unidentified Flying Oddball in the US, for no reason that I can think of). So my interest was piqued when a friend gifted me a graphic novel adaptation of said work by none other than famous graphic designer Seymour Chwast.

Now, since I don’t know the source, I can’t tell you or make any judgement as to how much of this incarnation of the work actually comes from Twain and how much comes from Chwast. I am going to assume that it’s mostly the design, layout and presentation of certain things in truncated text and visual support that is the realm of Chwast and the rest is completely down to the equally witty, it turns out, Twain.

Now, I also don’t know Chwast, or his work but, his style here seems to be a very flat, primitive representation of things which is, by its nature, quite direct in its communication with the reader. In fact, it rather reminded me of the old Tim Hunkin strip The Rudiments Of Wisdom, which I used to read in the back of the Observer Sunday Supplement magazine as a kid in the 1970s. The illustrations are done completely in monotone with the designer using just two, flat colours... in this case black and pale green... and also the white of the paper where ink doesn’t hit, to highlight certain areas of an illustration that he wants to stand out.

So various add ons to simplify and clarify Twain’s text such as a white highlighted head and shoulders profile of the main protagonist, with the wording “His name is Hank Morgan.” is the order of the day. I especially liked one of the designer’s more interesting choices for one of the splash pages, where a group of knights on horses are galloping flatly in a row, following a path into a castle which does a straight right angled turn. Instead of adding the knights past the turn in the same orientation, he also mirror flips the elements and adds it to the 90˚ turn on the image. Which was kinda neat.

The story itself, of a man who gets hit on the head and then wakes up in medieval England at the time of King Arthur, is charming but really not as upbeat as the movie versions I’ve seen, which tend to drop a lot of the political commentary and the horrors of the time period that Hank learns to take in his stride. There’s a lot of unjust torture and killing throughout and even Hank is not against killing for the right cause. Yeah, I can kinda see why Hollywood did what they did with it.

Now, I don’t confess to understand the politics of the thing... which should certainly not surprise any of my regular readers... but there seems to be a lot of social commentary in the story and, yeah, that’s fine. Twain is quite witty with it too and I think my favourite comment in the book was, when Hank talks about a small country “as BIG as Columbia”... “You couldn’t sleep with your legs stretched out without a passport.”

All in all, this is a very short review for a very simple looking but, I can assure you, far from simple approach to the source material. Chwast’s page layouts and the way he pushes certain pieces of content are deceptive and, I think, are doing much more than you at first think. Sometimes the illustrations bring a certain sense of fun to undercut the horrors of what they are actually depicting, for example. Such as when some knights and horses gallop over a minefield and the illustration consists of the big onomatopoeia “Boom!” and various human and animal limbs are seen in free fall around it. But then you start to think about it.

So, yeah, in summary I really enjoyed this version of A Connecticut Yankee In King Arthur’s Court and I think I shall probably try to read the original novel sometime before I die (although that may be sooner than I think, the way things are going). Chwast’s adaptation is an excellent introduction to the characters, events and ideas of Twain’s novel, especially if you’ve not experienced any of the movie versions over the years, which tend to play things strictly as comedy, it seems to me. So yeah, glad I got gifted this one and a worthwhile addition to the NUTS4R2 library, I think.