The Falcon In Danger 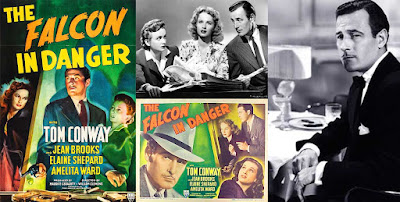 Well now, this rushed out sequel, because The Falcon films were getting very popular, demonstrates just why that was the case. The Falcon In Danger, despite its somewhat blasé title, is definitely one of the best I’ve seen in the series. Once again we have Tom Conway, now established as the current incarnation of The Falcon, Tom Lawrence, after his fictional brother Guy Lawrence, star of the first four films as played by Conway’s real life brother George Sanders, had died at the end of the fourth film in the series (The Falcon’s Brother, reviewed here). Conway had obviously proved he could carry The Falcon pictures on his own with the success of the previous entry in the series The Falcon Strikes Back (reviewed here) and he certainly has a charm about him and way of playing the character which is close enough to Sander’s characterisation so that you don’t really miss Sanders in the role.

He’s joined once again by Police Chief Donovan, played by Cliff Clark and his sidekick Detective Bates, played by Edward Gargan). These two, however, are behaving a little differently than they normally present themselves. For one thing, the running gag about Clark having to remind Gargan of his character’s authority every time he tells him to do something is not present in this movie. Secondly, The Falcon is never a suspect in their investigation and doesn’t get arrested once... which I think is the first time this happens in the franchise, if memory serves.

There’s also an interesting addition and subtraction with the dynamic of the way The Falcon’s main character is aided and abetted in this one. So we have an additional character called Bonnie, played by Amelita Ward, who is Tom Lawrence’s jealous Texan fiance in this. She fulfils exactly the same role as Wendy Barrie did in the first couple of the George Sanders Falcon films and, for the most part, just gets under his feet and tries to steer him clear of an unusually large amount of female characters in this one. However, what we don’t have here is any kind of male sidekick for The Falcon. No Goldy or Goldy substitute here... it’s just Tom Lawrence operating on his own and, frankly, the film is none the worse for it.

It’s also got a strong start to this mystery, with an airport scene as a plane everyone is expecting to land, instead crashes at the airport. When the plane (minus a wing from the crash) is boarded, there’s nobody on board it at all... not even a pilot. It doesnt take long for The Falcon to be embroiled in a plot involving two missing industrialists, a missing $100,000, the daughter and sister in law of one of the missing people and an assortment of interested parties. The mystery of the film is offset by the return of one of the industrialists about a third of the way through but, it also further complicates things although, I have to say, I was pretty sure I knew who the real villain of the piece was by about two thirds of the way through and, yeah, it was a fairly easy one to solve but that didn’t make getting to the conclusion any less enthralling or entertaining.

The dialogue is fairly quick fire and everything makes sense. They really don’t often make movies which sing themselves off the page in such a soluble pill these days (if you’ll pardon the mixed metaphors) and it’s a real pleasure to watch. Of course, because it’s shot in 1943, there are a few references to the war in this one, including a neat trick where The Falcon covertly operates the neon sign in the front of an antique shop during a blackout in order to bring the police there and get himself out of trouble. There’s also a scene near the start of the picture where a gambling joint is also raided but quick steps are put into operation to hide the evidence of what’s really going in there from the police and... I couldn’t quite work out what the police would be doing raiding a gambling joint, to be honest. It’s not like it was a ‘speakeasy’ from 20 years before so... maybe gambling wasn’t allowed during the war, I don’t know. If you’re old or knowledgable enough to know the answer to that question then please leave a comment at the bottom of the page and enlighten me.

If I had one criticism of this one, it’s that there were far too many female characters for me to keep track of, especially when a lot of them looked quite similar. I gave up on that angle about half way through the film. Interestingly enough though, at the end of the picture, Lawrence manages to revert to trickery and get his fiancé to ditch him so... I’m not sure what the set up will be for the next film in the series but, obviously, I’ll report accordingly in my next Falcon review. In the meantime though, I’d have to say that The Falcon In Danger is easily one of the more entertaining installments in the series and would definitely recommend this one to lovers of the detective fiction genre. I’m looking forward to revisiting the next one of these soon.