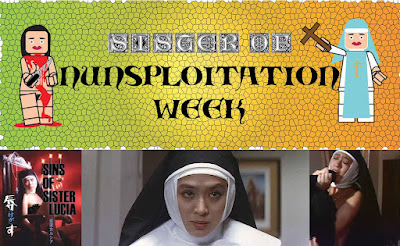 Sins Of Sister Lucia is one of Nikkatsu’s lucrative (until the advent of home video) Roman-Porno films (aka romantic pornography), brought out to combat the rise in Pink films which had become a way for Japanese cinema to combat what you could get away with on television and thus continue to bring audiences into the cinema. There were loads of these things made and, from what I can tell, the Roman-Porno sub-genre differed from Pink films only in that the budgets were a lot more generous. As Jasper Sharp, renowned expert on Japanese cinema (and fungi, but that’s another story) explains in one of the two extras that feature him on this nice Mondo Macabre release of the movie, there was a bit of a sea change at Nikkatsu when many top directors who didn’t want to just make sex movies left and went to other companies, leaving a load of former assistant directors suddenly in the driving seats and giving them new opportunities... although he does mention that the director of this one, Ohara, while good at what he did, wasn’t really considered the upper tier of Roman-Porno directors. I’m glad he said that actually because, honestly, I didn’t get a heck of a lot out of this one.

I bought this one because a) I quite liked the 7 or 8 Pinky Violence movies I’d seen (what the Pink genre evolved into) and I saw this one at a film fair and b) I liked the cover of this one (Yuki Nohira in a sexy nun costume) plus I saw the film was on the Mondo Macabre label. Now I used to love Mondo Macabre and they introduced me to a lot of undeservedly unloved exploitation classics over the years. I hadn’t bought one of their films in a long time so, since the price was right, I thought I’d give this one a go. Plus, I’ve seen very little nunsploitation in my time (this has changed since writing this review...  as you may have noticed on the blog recently) and certainly, to my memory, none of the Japanese nunsploitation movies.

The film starts off with Yuki Nohira as lead character Rumiko, renamed Sister Lucia by the head of the Mother Superior, being bizarrely and slowly pursued down the corridors of an abbey by her fellow nuns, singing religious songs at her. They finally corner her and tell her to confess her sins in order to properly join the convent. So we get a flash back of her revealing, to her religious teacher, that she’s stolen the corrupt bribe money of her crooked politician father, before seducing him. When caught in the act of practically raping the poor guy, she stabs her dad’s bodyguard and this prompts him to send her to the convent. They punish her for her sins with spanking, while simultaneously getting turned on by her story. The rest of the film is just the nuns all sexing each other up and the Mother Superior bringing in a monk every few days to fuck her and her two assistants to ‘bless them’ and relieve them of the desires which torture their bodies and get in the way of them communing with God. Pretty soon, though, everybody is at it! Sister Lucia continues to flaunt the rules of the sisterhood, culminating in her aiding two escaped convicts who fornicate their way through all the nuns before the police come. In a bizarre epilogue, Lucia is sent to a mental hospital as punishment for her wicked ways.

And there’s not much to say other than that. It really didn’t do much for me, it has to be said. It’s filled with the quite inane and rough groping of naked female flesh, while everyone on screen - man and woman alike - bow to the bizarre laws of their country by ensuring that their genitalia are in no way caught by the camera. It’s an easy and quick watch of a movie and, while it looks nice, I can’t say there were any breathtaking compositions in this one or much in the way of unusual edits which caught my attention.

And there’s probably not much more I can say about Sins Of Sister Lucia, other than the nuns at the convent must get through an awful lot of fabric because their clothing is constantly being torn away from their bodies. It’s not a film I’d particularly recommend and I suspect there are some much better Roman-Porno films which serve a similar kind of function in a much more interesting way... so, yeah, that’s a 'film watching hole' I definitely need to research and fill. I’ll report back here when I have done so.