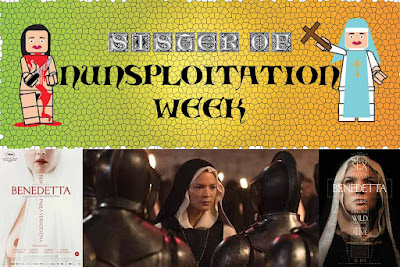 Okay, so Benedetta is the final movie in the second of my two Nunsploitation weeks for the blog this year... the one I’ve been building to in the hopes I could time my review with the same week of its release (or just after). Of course, when you see that a film has been made by a quality filmmaker and adapted from Judith C. Brown’s account of events... the book Immodest Acts: The Life of a Lesbian Nun in Renaissance Italy (or as Verhoeven puts it on the opening credits of this movie... “This film was inspired by real events”)... you have to wonder if it really is actually going to qualify as a nunsploitation film or more as a respectful, historical account of what we are told are the facts. Well now, Verhoeven is a consummate artist and, no matter what genre he chooses, he usually ends up delivering a very ‘classy’ looking picture, which is exactly what he does here...

But, of course, he really is also a fairly schlocky director in terms of the content of his work and, frankly that’s not a criticism. I reckon it could have gone either way but, of course, what he finally delivers, while certainly being respectful of the characters involved and also presenting quite an epic feeling, historical drama is... well I think anyone who’s seen this would have to agree that it’s a modern example of ‘proper nunsploitation’, no two ways about it. Certainly, in terms of the many exploitative moments in the movie, it really goes a lot further in terms of what it gets away with than the majority (if not all) of the films I’ve reviewed in my two nunsploitation weeks. This doesn’t, of course, make it the best of these but, I have to say it’s certainly one of the better ones I’ve seen.

Okay, so I’m not going to go into full synopsis mode on this one but I will say, in terms of judging the basic elements of the story, is that it deals with Benedetta (played by Virginie Efira) seeing many visions of Christ, manifesting stigmata and also taking on a lesbian lover in Bartolomea (played by Daphne Patakia). There is political intrigue between the various interested Catholic church parties, Benedetta and the Abesse (which I assume is the equivalent way of saying Mother Superior, played by Charlotte Rampling) and various trials and tribulations suffered by all the key players, set in the 17th Century midst the backdrop of the plague.

What Verhoeven does here... and kinda gets away with to an extent... is to try to show both sides of the coin in terms of the reality of Benedetta’s visions and he’s definitely treading on fairly similar ground to the brilliant, recent horror/thriller movie (depending on what the audience brings to it in their final analysis) Saint Maud... which I reviewed here. So you will see what Benedetta sees when she has her visions and it could be argued, when you think back to the intervention of a wild bird on her behalf at the opening of the movie when she is just a child, that he also shows one or two minor miracles. He does load it a little more in Benedetta’s favour than the way Saint Maud treats its central character, it has to be said but ultimately the film, although not having as visceral a finale as the former movie, gives us a similar ‘on the fence’ kind of stance. So although, for example, we’ll see many of Benedetta's visions of Christ, we are also given the possibilities of self inflicted stigmata, although it’s these very points that are played on as the drama unfolds and it all gets a bit ‘Salem witch trially’ for a bit.

And then there’s the heavy exploitation element... the fact that Bartolomea whittles down Benedetta’s miniature statuette of the blessed virgin into a dildo for their use, for instance. Or the torture scene where the pear of anguish is used to extract a confession. There’s also the element of blasphemy in this and, though I honestly wouldn’t usually bother to mention it, Verhoeven has already been questioned on this area regarding this film and gone on to deny that the film is blasphemous because, as he puts it, it depicts things that really happened. But, you know, because of the grey area more than heavily implied by the director when he shows us visions of Christ at their most exploitative, you have to maybe wonder at how he got away with that answer... he should maybe have just responded by an admission and then question the relevance of the accusation instead, I think. Because, yeah, you will see Jesus lopping off the heads of killer snakes, persuading Benedetta to get naked and up on the cross with him, save her from rape by slicing up soldiers and so on (and there’s a certain sense of duality in that scene in terms of ‘is it really Christ... no, the nightmare just changed’ aspect of that particular scene)... so, yeah, probably just a little bit blasphemous but, I’m not really the one to judge on that kind of stuff. It is, however, one of the most pulpy of dime store pulps takes on Christ that I can remember seeing in a film. A heroic Christ who wields a sword to get his woman out of danger, so to speak.

The shot set ups are not too intricate but they’re all pretty nice to look at and the movie feels like something very big and polished. Verhoeven does a nice thing with some of his transitions by pitching the occasional, very different, colour palette to segue into another scene. For example, you’ll go from those warm creams, oranges and beiges of the interior of the Abbey to, suddenly, the outside of the Abbey in a storm at night, where it’s all blues, greens and blacks. Not overly saturated or anything like that (although the ‘comet’ scene nearly gets there) but even these more subtle colour changes brush up against each other from scene to scene with a pleasing visual frisson that helps the movie trundle along at a fair pace (and it’s quite a long movie so that’s a good thing). Ann Dudley’s score helps the whole thing along too and, yeah, in one scene depicting self flagellating monks, you get to hear yet another rendition of the Dies Irae, which is kind of a curious comfort by this point.

And I’ve not got much else to say here about Benedetta other than, it really is a pretty exploitative piece of nunsploitation, the girls (who are often naked) look great and are so enthused in their roles that they pull off amazing, believable performances plus, my favourite bit (and see if you can spot it when you see it), there’s a dire part of the movie which brought an unwitting smile to my face when I realised the dialogue was the 17th Century Paul Verhoeven equivalent of, well, the ‘Pagliacci joke’. Yeah, that was a good moment. So that’s me done with both this and the second nunsploitation week and, I guess if you like the genre, you’ll definitely like Benedetta. So, yeah, done with the nun themed weeks now but not quite done with nunsploitation as a genre yet. There are a couple of good Blu Rays which have  just been released which I think could be considered part of this cycle, including what sounds like one in the big Severin box set of All The Haunts Be Ours folk horror movies sitting on my shelf so, yeah, there will be some more of these reviews coming at some point, I think.