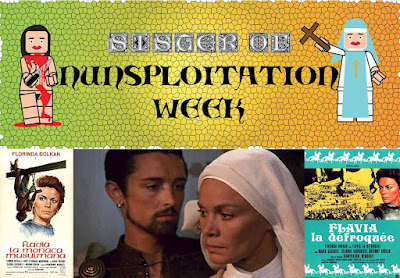 Okay, I want to start off Sister Of Nunsploitation Week with a bit of an apology. My previous week celebrating the genre saw a series of four films with somewhat diminishing returns, with my verdict on the later films being mostly negative. Well, because I want to continue, with this one, the practice of reviewing this week’s films in the order they were released into cinemas, I’m afraid this first review is still a fairly negative one, it has to be said. But, please, stay with me because the film I’m reviewing tomorrow is an absolute humdinger of a movie which I was absolutely thrilled to discover (when I actually wasn’t expecting much from it, truth be told).

Okay, so the notorious Flavia The Heretic, often cut in the UK but presented uncut finally by Shameless, on both their DVD and later Blu Ray edition (why they can’t do the same for The New York Ripper, which contains similarly exploitative scenes, is anybody’s guess at this point), is a film I was mostly disappointed with, in all honesty. Not that I was expecting a lot from it but, the ideas behind the movie are interesting... I just found it was all done in a fairly dry and dull manner.

The film starts off with a pre-credits sequence giving a semblance of motivation to the main protagonist, as young Flavia... who has been looking on at a battlefield filled with the slaughtered bodies of Muslims... sympathises and shares a moment with the one surviving enemy soldier before her father, despite her pleading, then cuts his head off. Then, she is sent to a nunnery and, sometime during the fairly dull opening credits, we are told the year is around 1400 and she manages to grow up into famous actress Florinda Bolkan, right in the middle of a scene which jumps time via a clever cut.

The film is mostly a lot of boring conversations between her, her friend Sister Agatha (played by María Casares) and pretty much anyone who will listen, about how men are all bad (apart from the odd one or two she likes) and how women should be doing more stuff. Yup, she’s a real feminist but, I dunno, she’s definitely ahead of her time and seems like one of those new era, man hating feminists who seem to have taken the stage in recent years (which seems to me less like proper feminism and more like enhancing the inherent matriarchy of society but, yeah, I’m not getting into that here).

So she hates her father and all the men in her Christian town, especially what they did to one of her fellow nuns for showing sexual interest during a bizarre scene in which a bunch of lunatics are let into the convent for a little while, for purposes less clear to me. And what they do to the nun in question is one of the notorious scenes which always used to be snipped out on these shores until recently... so body having hot pitch dripped on it, cutting the nipples off etc. Things get no better after Flavia runs away from the convent with her favourite male tutor and the father recaptures her and has her flogged (for reasons again unclear to me but presumably as a metaphor for the prominence of the stupidity of male power over the female?).

Flavia also has a sympathy for Muslim invaders since her experience on the battlefield as a kid... looking up to them and having odd, surreal moments when a painting of one comes alive to interact with her now and again. So when the Muslims show up, Flavia and Agatha spout their feminist mantra gleefully at the fleeing Christians and stay to watch the carnage, walking around the battlefield unmolested as they witness various conflicts. Unmolested, that is, until Sister Agatha is speared to death by one of the Christians due to her words. So Flavia throws herself at the Muslim chief, sexes him up and then, after a slightly surreal scene where she takes them all back to the nunnery to get revenge by sexing the nuns up (naked nun climbing into the stomach of a slaughtered, hanging cow anyone?)... wakes to find the nuns all dead. Then she armours up and joins the battle as the Muslims take her father’s town but, after this, comes a cropper with her new man and is left behind when the invaders return to the sea. After which, Florinda Bolkan continues the cliché of coming to a rather sticky end in some of her films, by being held to account for her crimes by the remaining Christians and having the skin torn from her body.

And it’s a film which admirably pushes the idea of feminism and acceptance pretty well, more so than I’ve seen in many other movies but, at the same time, I have to say that with all these spectacular and truly exploitative things also happening, I found the film pretty much dull as ditchwater. I think Florinda Bolkan is a pretty good actress but here she just spends the whole film in a kind of moody anger all the time, scowling at almost anyone who tries to engage with her.

Also... and I don’t think this is anything to do with the print that Shameless Films sourced, the colours are all completely washed out. I mean, it’s a given perhaps that the monastery and its interiors are just full of creams and beige hues but, even when Flavia ventures into a green landscape, it’s extremely pale like it’s dried out with dead grass in terms of its colouring. There are no really strong colours in the movie and this, combined with the lack of any really interesting frame designs, is maybe why I responded to the film in a less than enthusiastic manner. Don’t get me wrong, the camerawork is fine, with the director using moving camera to capture both the subject of a shot and then shifting to others reacting to that within the same shot without a cut so... yeah, it’s economical in that manner and holds some interest rather than just cutting to reverse shots all the time but... I dunno... nothing really grabbed me about this one.

So that’s me done on Flavia The Heretic... a film which has some notorious exploitation moments but, ultimately, left me more than a little cold. I don’t think I’d recommend this to many people, to be honest. However, come back tomorrow and you certainly will find me reviewing a true masterpiece which I certainly would recommend to all lovers of cinema. Hopefully you’ll take a look.