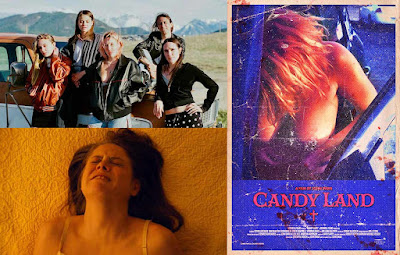 In The Realm
Of The Cleanses

Warning: Okay, this one will have slight spoilers
because I want to talk about certain things.

Candy Land is a new film I saw at FrightFest this year and, as you’ll probably see people writing in their various reviews, it’s got a kind of grindhouse movie vibe to it. It’s not actually a horror film as such, more of a throwback (in the absolute best way) to the kind of raw edged thrillers being churned out in the 1970s except... that grindhouse tag also does it a bit of a disservice because it’s actually a very well put together, slick piece of movie making for sure. I had a couple of problems with it, which I’ll come to (and it’s the same issue my friend who saw it with me had) but, overall it’s a very gutsy and technically well made piece of art.

Okay, so the film is about a group of truck stop girls (and a guy) played by Eden Brolin, Sam Quartin, Virginia Rand and Owen Campbell, plus their ‘employer’ played by Guinevere Turner. They all live in a few motel rooms and service the various truckers and other customers either in their rooms or out in ‘the pit’ where the truckers park up, taking sex directly into their trucks. Another character, who turns a blind eye but constantly procures the male sex worker for his own gay thrills is the local sheriff (who is very bad at his job, it has to be said) played by William Baldwin.

Now, they are constantly bothered by some kind of ‘deeply Christian’ cult talking about repenting and cleansing their souls living nearby and, one day, rejected from that clan of people, a character called Remy turns up, played by Olivia Luccardi. Now she is the naive girl who, because of their protective nature, gets taken in by the friendly bunch sex workers and she soon becomes one of the girls working tricks. Then a client turns up dead in the bathroom, his eye stabbed out. Things get more violent and it’s not long before one character starts attacking the customers in gory ways.

The film pulls no punches in certain areas of the dark territory it explores... via nudity and editing (yeah, I’ll get to it) but also has a truly poignant atmosphere and a sense of joy, love and camaraderie between the main characters. Which of course, makes the murders and sense of peril for these people all the more engaging.

Okay, so the editing. At lots of points in the film, especially early on, a bunch of close ups are used with the director cutting to details of what would normally have been a wider shot, often edited together every two or three seconds without any real sense of establishing shot, often used almost as a montage to bring you straight in, up close and personal, to the way the truck stop characters live their lives. So, that way of shooting things against the ingrained, expectations of wider master and establishing shots quite often, tends to leave you with a sense of being less than comfortable with the way the film is shot and, of course, this all serves to make the audience more vulnerable to the onslaught of both violent imagery but, also, really helps generate the amount of suspense and tension you are feeling. Especially coupled with the charming performances of the actors here. It really is skillfully put together and so I can forgive it any other problems I had with the film.

Bit I’ll highlight those two problems here anyway because, heck, it’s what I do, I guess.

Number one problem for me is you will clock onto who the killer is right before any of the murders take place. So when the first murder happens and it’s not made clear by that point who the culprit is (it will be soon), you pretty much know anyway what’s happened. Then there’s a red herring of a scene where one of the truckers attacks Owen Campbell’s character but, to be honest, that really doesn’t detract from who the real killer is and, yeah, I was disappointed to latch onto who it was that soon in the film. Although, having said that, maybe the writer/director wanted us to know that anyway from early on, to build the sense of tension so... yeah... it didn’t spoil things overall.

What did detract just a little (but not enough to not celebrate this marvellous film in the way it needs to be championed) is that both my friend and I were expecting the film to be a lot more violent than it is. Don’t get me wrong here... it’s a total bloodbath of a movie but, I think because they were going for practical effects instead of CGI (which is always going to be a better choice, I think, no matter what), I did get a sense of ‘feeling’ the kills rather than seeing them. Things were cutting away just before a body hit for the most part or taken from a concealing angle and, although there was plenty of gore on offer, it felt like the illusion of violence was in the foreground, rather than seeing a knife or blunt object actually penetrate a targeted part of someone’s anatomy in close up on camera. But, again, it’s only a minor grumble and, like I said, because of the visual language the director, DP and editor have boiled it all down to, it feels a lot rougher than it looks, if that makes sense.

All in all, then, a nicely put together movie full of nudity, gory aftermath, fantastic acting, a somewhat off-kilter editing style and some rough, dark subject matter. I won’t say anymore than that because I don’t want to spoil the experience for people but, yeah, Candy Land is definitely one to watch. Also, Colin Salmon was at hand to introduce a clip from his new exorcism movie Prey For The Devil, which is released in UK cinemas at Halloween this year and... yeah, he’s an interesting person to have speaking about your new movie, that's for sure.