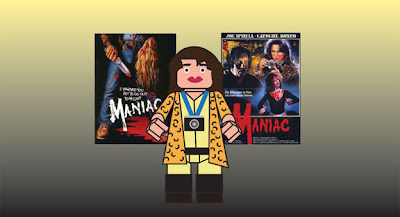 Warning: I maniacally share spoilers here...
you have been warned!

I’m really not sure what it is I can really say about the almost legendary Maniac now that I’ve seen it. It’s not quite the kind of movie I would usually watch and, although I adore Italian Giallo movies, which were an obvious influence on this movie (Argento’s muse Daria Nicolodi was originally cast as the female lead but dropped out a week or so before shooting, prompting a quick recast) those influences are very much channelled into the less ostentatious and more grubby illegitimate stepchild of the genre, the American Psycho Slasher.

Even so, though, now I’ve actually watched the thing, I’m reluctant to write it off as just another “slasher on the cheap” quickie because the acting is actually quite interesting and the writing, in some of the scenes, does give one pause for thought.

Now regular readers of my articles will know right away that there is only one reason why this movie is even a blip on my radar... yeah, you guessed it, Caroline Munro is the actress that director Lustig (who now runs the legendary DVD label Blue Underground, who put out this particular DVD) and co-writer/lead actor Joe Spinell hired to replace Nicolodi... and they couldn’t have made a better choice as she enhances their movie no end... but you guessed I’d say that, right?

When I saw the cover of the recent 30 Year Anniversary DVD of Maniac I also had another reason to buy it (as if Caroline Munro were not enough reason in herself) in that I recognised the artwork from back in the days when I was in my early teens and Starlog magazine always had a great advert, usually on the back cover, for various soundtrack albums and Maniac was always on there (along with The Avengers, Mad Max and Goblin’s addictive Tenebrae score if memory serves). So that was another reason to check out this movie right there.

Maniac stars Jo Spinell in the title role as a... well you know... a maniac (named Frank Zito). He... in the popular parlance, which it isn’t anything of the kind because I just made it up but I’ll go ahead and use it anyway... “gives good stab.” Now Joe Spinell is an actor I’ve talked about before in my reviews of two other movies he was in with the gorgeous Ms. Munro, Star Crash (reviewed here) and The Last Horror Film (reviewed here). He always comes across to me as someone who should have made it big but didn’t. He’s a much maligned and underrated actor it seems to me and if his “maniacal monologues” in this movie don’t convince you of that, his charming dialogues with Ms Munro when the character has his “normal” head on will hopefully make you realise, dialogue aside, that there’s more going on in that head of his than you can necessarily see on the surface unless you take the time to look beneath. That is to say... don’t dismiss this guy when you first see him... give his characters (usually quite sleazy characters to be fair) time to grow on you.

There’s some nice things in this movie to take note of, like the special effects by Tom Savini (who also takes a small role in this one) which are mostly top notch... although the very first beach throat slashing did look a little like a theatrical razor “squirting” blood, it has to be said. And how do people in movies getting their throats slashed manage to scream every time... surely that possibility contradicts what’s actually being depicted? But there are some notable gory moments which fans of this particular genre might enjoy seeing done so well... like a scalping sequence and a Tom Savini shotgun-to-the-exploding-head-special which is actually quite visceral.

There are also a couple of bad things in it which aren’t that great, it has to be said. Asides from that opening throat slash, there was an absolute howler of a continuity error during a sequence where a young lady has been chased by Spinell into an underground train station. She lets a train go and as it pulls out she is totally alone at the station... except on the shot from inside of the train as it pulls away, where the platforms are full of people... now that’s bad continuity! That being said, however, the following sequence where she is hiding in the bathroom, which probably seemed old fashioned and corny to the jaded souls watching these kinds of movies even then... is actually quite fraught with suspense and tension. Even though you know the inevitable is going to happen... this doesn’t stop the build up from lightly setting you on edge... which for this genre of movie is pretty much a necessity I would have thought.

And, of course, Caroline Munro is absolutely superb, again, in this one. She really does elevate the sequences she’s in (playing an Italian Fashion Photographer) and her acceptance of Joe Spinell’s character as a possible future boyfriend is made completely believable by her genuine sense of empathy and charm. She really gives this movie a lift where it’s needed most and helps catapult the film towards its final destination where two cops bust in on Frank who may, or may not, be dead already.

This film may be a bit grubby and sleazy in places (like a standard slasher movie of the period crossed with some of the atmosphere, in places, of Martin Scorcese’s Taxi Driver) but it is, for the most part, quite well crafted and I can see why it gained (and still has) a passionate enough audience 30 years later to put out a double disc edition on both Blu Ray (the dreaded format) and DVD. The transfer on this one is probably as good as it’s ever going to get (as it should be with the director running the DVD label) and it comes loaded with some great extras including a modern interview with the amazing Caroline (woohoo) and a not so great piece of interview footage of her from the year of the films release where the film is unfairly treated as less than appetising fare by the hosts of a TV show and where she barely holds her own against them in its defence (but defend it she does... this is the woman you want pulling for your team when you want to do some publicity spots).

For fans of the genre... or fans of Ms. Munro (like myself) then this DVD is well worth picking up and shelling out the hard earned cash for. This is pretty much as good a condition this movie is ever going to be seen in until the next crazy format change is upon us... so please take a look for it if you have the time and the inclination.
Posted by NUTS4R2 at 20:38