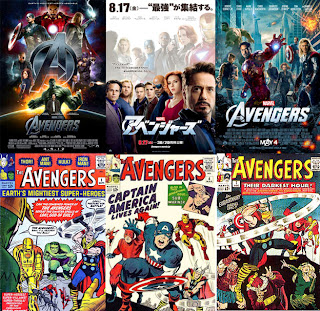 Warning: There are going to be some pretty strong spoilers
assembling themselves in this review... don’t say I didn’t warn you.

Hmmm... Maybe I was setting myself up for something of a fall but when the good word of mouth buzz about the new movie of “Earths Mightiest Superheroes” (as the tag line on the comics always used to read back when I were a lad and directly quoted by Rob Downey Jr in this movie) hit the internet, I was really expecting to like this film a lot more than I actually did. Don’t get me wrong... it’s not a terrible movie by any means and it’s an incredible task to be able to keep this many balls in the air in terms of plot points and multiple characters who all have to be major factors in this kind of film... it just fell a little short of my expectations and disappointed me a fair bit. This is usually something I try not to let happen... have expectations that a film will actually be quite good, that is. I always try to keep my expectations as low as possible to avoid this kind of disappointment but I guess the long slow tease over the last 4 years where The Avengers has been less than covertly promoted in various "slot in" sequences in 5 other films has artificially built up my expectations somewhat. This is, after all, a film which is a sequel to 4 other superhero franchises, where four of this particular team come from.

Maybe that’s my problem with it. All of those four characters - The Invincible Iron Man, The Incredible Hulk, The Mighty Thor and... The... um... and Captain America -  have to have some serious screen time to keep their respective fans happy and, of course, other members of the team (Black Widow who debuted in Iron Man 2 and Hawkeye who made his first on screen appearance in Thor) also need equal amounts of screen time... not to mention Loki and the other regular characters who are returning from some of the previous films... Nick Fury, Agent Coulson, Doctor Selvig and Pepper Potts (regrettably, Natalie Portman’s character is referred to only in the context of a holographic photo). It’s an almost impossible task to cram all those characters into a movie that really, in my opinion, could have done with about three quarters of a hour of judicious editing down, and still have everything flowing the way a good story does... if story is what you’re after.

Truth be told, because of some of this, it’s a movie which does, in places, become a little dull and jaded around the edges without concentrating on any one thing for too long. It’s certainly weatherable because, in spite of all of this, there are some really great, kick ass moments in this movie, but I did find myself clock watching a little before the end of the movie, which is a little unfortunate.

Also, I thought there was a certain inequality in terms of character arc on this one. Thor, for example, appeared almost from nowhere and I still don’t know how he managed to get back to earth after the end of the last movie, when the rainbow bridge from Asgard to Earth was destroyed. Did I miss the explanation somehow through all the visual noise in this movie? Maybe so.

I thought Captain America, Nick Fury and Hawkeye had a little less progression of character in this one too. Apparently the original three hour cut of this had a lot more of Captain America in it, including one sequence I would have really liked to have seen and which I would have expected to give the character a little more depth. His reunion with his 40s sweetheart from the previous movie (presumably as a very old woman now) was sadly left on the cutting room floor for the theatrical release but I suspect they’ll stick it out on BluRay when the time comes (not that I’m going to be bullied into buying a BluRay player just for this release!).

And to be fair to the Cap, he did get the best line in the movie. Two words when he was giving orders to his superhero army at the final battle of the movie. Just a quick order to a certain green-skinned goliath who more than fulfils this order... “Hulk... Smash!”

On the other hand... some of the main protagonists in the movie did get a much better character arc and sense of progression and, to be fair to the movie, were handled much better...

Black Widow is introduced in what amounts to a remake of the “tied-to-a-chair-fight” in the first Charlie’s Angels movie. Despite all this, the character manages to demonstrate her techniques of prizing the truth from people not once, but twice, over the course of the movie and her back story is fleshed out as something more like the Black Widow I used to know as a lad growing up in the early seventies as opposed to the travesty of the character as she appeared to be in Iron Man 2. As usual, however, Scarlett Johanssen does a pretty good job in the role.

Agent Coulson, although not exactly a major player but certainly a big series regular, is fleshed out a little more and makes the ultimate sacrifice in this movie by dying at the hand of Loki as he fights back (well, hey, look... when I say there are going to be spoilers in a review there’s going to be spoilers... you were duly warned). Perhaps not a major character for some but certainly he has a lot more screen presence than Loki, who is as dull and flat and useless as he was in Thor. Honestly, I don’t understand why people like this character so much because the guy playing him seems to have virtually zero screen presence... what’s up with that?

Tony Stark was pretty great in this. Not only coming up with ways to save the world and also a new way to put his suit on (as you just knew he would) but also, finally answering the big question which has kinda plagued the character since his inception as a guy wearing armour... is he really a hero? Captain America questions Stark’s ability to make a sacrifice for a cause and cites this quality as a true mark of a hero. In the final battle sequence Stark sacrifices himself for the planet and proves himself a hero (and in this sense, man of the match) but, of course, ends up surviving that sacrifice... since we already know Iron Man 3 (aka Iron Man 5 in my book) is due up for shooting soon. Plus we all knew by this point that we hadn’t seen the shot of Hulk catching him yet from the trailer.

And I’m saving the best character for last because, without him, this movie would not have got anything but a big thumbs down from me...

Bruce Banner/The Incredible Hulk, as played by Mark Ruffalo (I guess nobody wanted to work with Ed Norton again... I hear he’s difficult on set?) really comes through and finally does the character some justice in this movie. I’ve always liked Mark Ruffalo as an actor anyway (seriously check him out in My Life Without Me and In The Cut) but a combination of his acting with some “not half bad” dialogue writing for the character (the original TV Hulk Lou Ferringo does the voice for Hulk on this one but Ruffalo did all the motion capture himself and the CGI Hulk’s features are obviously modelled after Ruffalo) really works wonders and the character positively shines in this one. He plays Banner as a much more confident, in control, kind of person... one who has come to terms with his lot in life and who is at peace with what is obviously a constant raging anger within him (he lets slip near the end that his secret is to be constantly angry all the time, which helps him tame the beast I guess).

When he’s the Hulk, too, he gets three of the most attention grabbing and “physically” witty scenes in the entire movie. The first is when he and Thor (who he kinda dislikes after a fight with him earlier in the film) take out a load of aliens and they both stand triumphant... there’s some brilliant CGI comic timing as the Hulk does a little side punch into Thor’s head which sends him flying off screen. It’s a bit like a Ren & Stimpy cartoon.

The second standout Hulk moment is where the “evil” Loki starts “monologuing” in front of him about how humans are pathetic and they should all neal to him because he’s a God. Right in the middle of his speech he is interrupted by the Hulk picking him up and battering him all over the place like he’s a limp rag doll. I couldn’t hear Hulk's words to him as he walked off and left him smashed on the ground because the audience was laughing so hard.

The third wicked Hulkout moment is the bit where Iron Man is unconscious, presumed dead. Everyone is all sad and weeping and then Hulk just lets out a big roar right by his face and he wakes up! This was pretty funny.

I really wanted this movie to be more than the sum of it’s parts, especially as some of those parts were really shiny. Alas, I feel The Avengers is less the movie it possibly could have been. That being said... there’s plenty for both comic book afficionados and superhero fans to get their teeth into in this one. Lots of geeky references to old comics but I don’t want to give away too many of them (and I’m still trying to process them all) but I could almost swear there were even a few panels from the legendary four issue mini series Marvels recreated in this one. It’s been over a decade since I read that and the issues aren’t anywhere I could easily get ahold of them for this review (boxes behind boxes behind boxes) but it would be great if somebody reading this could tell me if the waitress looking at the battle from the diner window and her subsequent TV interview footage were taken from this tome. There’s a even an ALIEN reference when Banner is greeted by veteran character actor Harry Dean Stanton (wearing his trademark hat from ALIEN and Paris, Texas) and they get into a conversation about... well... aliens. That was pretty good to see. I would say, however, that the inevitable Stan Lee cameo, which I was waiting for all the film and which didn’t surface until a few minutes before the end, was a little lacking in originality in this one. Probably his worst cameo to date.

Okay so, as you can tell right now, I didn’t love The Avengers but neither did I hate it. Of the six Marvel movies actually made by Marvel Studios themselves so far, I’d say it was my third favourite... far behind the first Iron Man movie and the Thor movie in terms of both quality and entertainment value and into the okay but not so hot status of the other three Marvel Studios movie... Iron Man 2, The Incredible Hulk and Captain America: The First Avenger. However, like I said before, if you’re into comics and/or superhero movies, you’re really not going to want to miss this one... and if you’re a fan of The Hulk, well this is his best movie. Have a good time with it if you can.
Posted by NUTS4R2 at 16:10