Sleepy Eyes of Death 7: The Mask Of The Princess 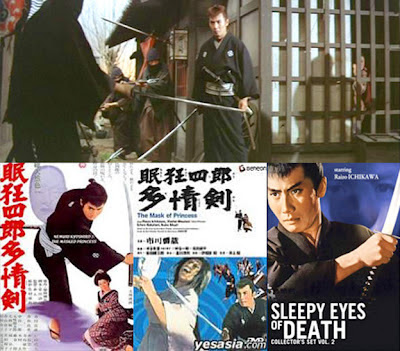 Mask Of Red Death
Sleepy Eyes of Death 7: The Mask Of The Princess
aka Nemuri Kyôshirô 7: Tajo-ken Japan 1966
Directed by Akira Inoue
Anime Eigo Region 1
This is easily the best in the Sleepy Eyes Of Death series of movies that I’ve seen so far. A quite astonishing film, in fact, for all kinds of reasons.
It starts off with a pre-credits sequence which recalls Noh theatre in costume (if not in actual delivery) in which the film’s arch villainess, the hideously deformed Princess who is forced to wear a mask to hide her face from the fourth installment in the series (reviewed here), returns and proclaims a very nasty revenge on Nemuri Kyôshirô which is quite disturbing, I have to say, in its fervour. Heralded by harpsichord statements on the soundtrack, we then cut to the opening credits followed by Nemuri springing the first of many traps set for him by the lady in question.
During these first sequences, he purchases a maid (a face-saving exercise to cover up for the fact that he is, in fact, buying out and freeing an innocent 15 year old virgin from her service as a prostitute) and she and a noble samurai (who is not what he seems) follow Nemuri Kyôshirô around on his day-to-day business.
His day-to-day business during the course of this movie is, of course, taken up completely with springing and evading the ambushes and traps set by the deadly, exiled Princess who has employed a whole load of ninja’s to take him out. Some of these are pretty exciting set ups, including a seemingly mad girl wearing a sign saying “Nemuri Kyôshirô molested me” who leads him to an abandoned mansion which, at the flick of a switch, has portcullis like cages to totally encase the room Kyôshirô and the girl are occupying.
This all sounds like pretty good boy’s own adventure stuff... and it is. The sheer nastiness of the threats aimed at Kyôshirô are quite sinister and worrying and this really lends the movie some edge. For example, his 15 year old maid is kidnapped and almost doesn’t miss having her face burned off with acid as a lesson to our hero... and this is also the movie where Kyôshirô shows real concern (following on from the brilliant character development in the previous film in the series) and you really begin to feel for him as a person.
But that... all that... pales in comparison to the sheer brilliance of the shot design and cinematography of this one. We’re almost entering giallo territory here people! Some of the stuff in this one is absolutely breathtaking and although it’s quite blatant and stylistic, the way shots transform themselves and shift composition “in-camera” using depth of field combined with slight movement to shift characters from different, visibly blocked out areas in shots, it all seems completely effortless. Effortless but obviously well worked out and brilliant. The way the director cuts up little partitions in the shot to frame characters in and then change the perspective within those set ups to emphasise different things was absolutely amazing to watch. This one feels like it is to the Sleepy Eyes Of Death series what On Her Majesty’s Secret Service is to the Bond series... an absolute, art masterpiece.
I don’t know how the series will ever top this one but I was absolutely gripped from the disquieting opening scene right up to the rather “cut and dried” ending... if you’ll pardon the expression. All the way through this one, as you watch and breathe in the kalieidoscope of dazzling shot designs, you feel like everything is at stake and that Nemuri Kyôshirô must come through for the girl who is in his care and that this road leads to his redemption. If you are wanting to get hooked on this series of movies then, although this is technically a sequel to an earlier entry, this really is the one to do it with. If you like chanbara then the sheer artistry and talent on display in this one makes it unmissable. So don’t miss out on it!
Posted by NUTS4R2 at 19:47