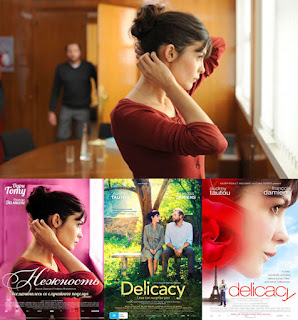 The Girl With
The Audrey Tautou

This review is dedicated to a very special friend.

I nearly left La Dèlicatesse on the cinema shelf, truth be told. I love Audrey Tautou but this movie wasn’t playing locally (no surprises there then... I hate provincial multiplexes) and it looked like it’s time in London would be limited to just a couple of weeks. Also, I didn’t think a whole lot of the last romantic comedy I saw Tautou in last year, Beautiful Lies, and this was looking and sounding like a repeat of that movie.

But then I had one of my strange “urges” telling me I should make the effort to catch this one and so I went up to the Haymarket in London for early yesterday evening and took a look. I’m so glad I did...

Now I’ve not read the director David Foenkinos’ original novel that this is based on (yet) so I can’t really comment on how good an adaptation this movie is. I’m guessing it’s pretty good because he also helped write the screenplay and co-directed but... one never knows. If anyone who’s reading this does know if it’s a good fit then please enlighten me in the comments section below. I do know that some time in the next few years I’ll probably try to pick up the English translation of it (in all good bookshops now, apparently) if I remember.

What I do know is that this is not a light, fluffy, romantic comedy that you have in La Délicatesse. There’s more to it than this. It doesn’t just use the situations created by two people who love each other as springboards for funny situations or painfully embarrassing moments like a lot of lesser movies do... there are funny scenes in this movie and there is terrible pain on show too... but it’s much more adult than to just use these to concoct a formulaic sequence of events from this kind of set up.

Yes, love is playful and silly and often perceived as childlike... that’s okay, that’s all a part of what love can be. But this in no way means that this kind of phenomenon between people should be treated in a throw-away manner as it is in a lot of movies that regularly do the rounds. Last night I found myself texting these words to a very close friend as I stood at the exit of the cinema after the movie had finished...

“The French have a knack for just occasionally capturing love on screen without treating it lightly.”

I have to say now that, in the cold light of day, I feel exactly the same way about it. La Délicatesse is an absolutely wonderful movie about certain aspects of love and, perhaps more accurately in some places in this movie, attraction. It’s, for sure, shot through with a hefty does of personal tragedy, but the themes in the film are all treated in a very sensitive manner and, marvellously, it manages to do this while still retaining a certain sense of poetic beauty, both in language and rich, clean visual imagery... which other movies tackling these kinds of subjects may shy away from. There’s a real warmth to this film and, if you’re anything like me, you’ll probably leave the cinema with tears in your eyes.

There’s also some other interesting things going on here. Three of the main protagonists all have their own internal dialogue going on as a voice over narrative at certain sections of the film... but this is a “present tense” kind of narrative. About a third of the way into the film you’ll be made very aware that it can’t be anything but a present tense narrative... I just can’t tell you why without spoiling it. Something happens and it was only a minute or two before it happens that I realised that it was going to occur. Good for them that I didn’t see it coming a mile off... this is because I’d been lulled into a certain sense of security by the voice overs.

The film is very well shot and designed but it doesn’t really make a point of this except when it comes to “transitional shots”. There are a lot of these and, apart from a very flashy shot depicting a marriage in the first third of the movie, they are kind of “hidden” transitions that don’t call much attention to themselves but which leave you catching up because they jump forwards a good amount of time between shots. The shots are mostly hidden because they are often shots which match the previous shot and look like a natural continuation of those shots... until you realise the clothes the characters are wearing are suddenly different and this is not a continuation of the previous part of the scene etc. It’s a bit irritating at first and it starts doing these time jumps from very early on in the film, I think even before the title of the movie has come up on screen, but they work quite well and are mostly not too jarring. It will not take you very many seconds to “catch up” with yourself in this film.

The performances by the main characters are all very good, as you’d expect from the calibre of actors on display here. Since one of the main protagonists is Swedish, you also get some nice little jokes about this character’s home country, including a blink and you’ll miss it reference to Stieg Larrson’s Millennium Trilogy (which now fully justifies my review title, thank you very much). The music score by a French pop artist woman called Emilie Simon is amazing (apparently the album this stuff can be found on as an interlaced project is called Franky Knight) and gorgeously interweaves instrumental passages with songs she’s singing which comment on the appropriate moments on screen. I’m gonna have to look into this methinks.

All in all, I was really pleased with this fine slice of French Delicacy. It takes guts, sometimes, to show even just the surface details of the complexities of love and, while this film is certainly no Betty Blue in terms of showing the devastating forces which are set in motion every time somebody starts seeing someone, it doesn’t cop out either... even when it’s being its most poetic. A truly adult film for anyone who’s ever been in love and not a fluffy series of romantic jokes... although there are some very funny romantic comedyesque scenes here too. Not a film to be missed if you have the heart of a poet or a lover... or both.