Doctor Who - Terror Of The Autons 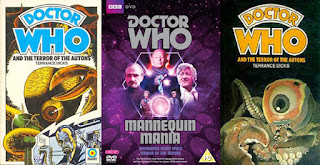 Okay... so here we have a Doctor Who serial that I’ve not seen in 41 years... I was three years old the last time I watched this one. It’s the second and final of the Jon Pertwee era stories to feature the Nestene intelligence and its deadly tools of the trade, the Autons. This is the last time this enemy would be properly seen again until they returned to the series (on more than one occasion) with the inaugural Christopher Eccelston story Rose.

As I began to watch this one, however, it became very clear to me that this story was a pretty interesting tale of Doctor Who “firsts” than I’d realised when I’d slipped the disc into the player. Lets take a little look at those...

My first clue was when one of my favourite all-time companions Jo Grant (played by the incredible Katy Manning) walked into shot and The Doctor was actually quite rude to her. What’s going on, I thought. Turns out these two characters had never met before. Yep! This is the very first story to feature the inimitable, long-standing companion Jo Grant, after Caroline John’s companion Liz Shaw (who featured in the first Pertwee story, Spearhead From Space, which was the first Auton story) had left the show. After accidentally causing trouble and mayhem in her first appearance, Jo Grant is kept on as The Doctor’s new assistant because, it seems, she’s just too nice for The Doctor to tell her he doesn’t want her around. Smart move Doctor!

The second “first” is that this is also the initial story of UNIT (United Nation Intelligence Taskforce) regular Captain Mike Yates on the show (Richard Franklin). He’s got pretty good chemistry with Jo Grant and one might almost feel that romance could possibly be on the cards at this stage. So this is, in fact, the first story to feature the full triumvirate of regular UNIT characters on screen together in the same story - Brigadier Lethbridge Stewart, Sergeant Benton and Captain Yates.

Lastly, and my no means leastly, this is the first appearance of The Doctor’s arch nemesis The Master, as played by the late, great Roger Delgado. Delgado made such a lasting impression with this role, mixing charm and ruthless villainy in equal measure... and right from the start he’s using his famous trademark weapon of a Tissue Compressor Gun which kills people by shrinking them down to the size of dolls. In just a couple of years, Delgado would find himself decapitated in a freak road accident in real life, but it’s a testament to the absolute brilliance of his performance that he is the one face you are always guaranteed to think of first (if you’re over 40) when the character of The Master is ever mentioned.

Okay... so this four part serial is one of those ones which got a lot of complaints from the parents of “scared silly” children at the time... and it’s easy to see why. The Auton’s trademark has always been death by everyday plastic objects which are usually harmless and this one has its fair share of ingenious deaths, aside from the trademark shop mannequins. These include a plastic blow up sofa which crushes a man to death by... well kinda swallowing him (it sounds better than it’s actually presented, believe me), a telephone chord that tries its best to strangle the life out of The Doctor, deadly plastic daffodils and a miniature doll that hurls itself on its victims to strangle them. All good stuff although modern viewers looking back at this one through the passing years may wonder what all the fuss was about, and I can’t say I’d blame them. The execution of these effects is so awful and crude (more so than in the previous Doctor’s black and white incarnations) that it’s hard to remember just how naive we all were to be taken in by this kind of thing at the time.  Even some of the effects that shouldn’t be effects shots, just actors in interior sets, are actually the actors standing on a projected backdrop of that interior... and they so look like it. The miniature doll death is particularly disappointing in retrospect, since it relies on an actor in a suit on blown up, projected backdrops lunging... followed by the victim attempting to sell the shot by gagging and trying to pull off a static doll from his throat. Comical death then but... the nation was in an uproar at the time it seems.

But, as typical of the Doctor Who stories in this period of the show, the bad effects work is just not really a problem because the dialogue, story and acting in these things is all top notch and the on-screen chemistry of the performers really helps to sell the story and distract from the sheer clumsiness  of the effects work (mostly due to budgetary constraints I would  guess... the effects teams on these things had to be pretty resourceful) and instead get the viewer caught up and involved in the events as they play out on screen. There’s some nice stuff here, especially when one of the guest characters fights the Nestene consciousness that has taken control of his mind and sacrifices himself for the good of the The Doctor and Jo. Perhaps a little rushed but it still manages to inject a certain amount of poignancy into proceedings.

At the close of the story, The Master helps The Doctor defeat the Nestene intelligence himself but when he escapes, The Doctor reveals that he has swapped out a crucial piece of The Master’s TARDIS with an older version from his own... leaving The Master as stranded on earth as he is. This new Moriarty for The Doctor was obviously expected to be a successful element of the show right from the outset and the chemistry between Pertwee, Manning and Delgado is a joy to watch at these early stages, as they always would be. These characters really hit the ground running.

So... all in all I would say that Terror Of The Autons is even more entertaining than Spearhead From Space and definitely worth a watch as an important serial establishing some long running elements in the show. Put this one on your Doctor Who play list, if you have one.