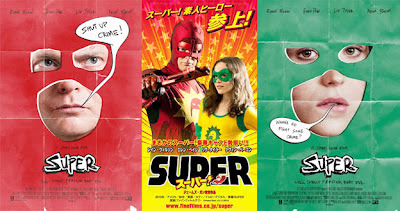 Panel Vision
Super US 2010
Directed by James Gunn
G2 Pictures Region 2
Warning: There’s a couple of superpowered
spoilers in here somewhere.
Hmmmm... how to review a film like Super.
Not too sure about where to begin on this one because, although it’s riding the wave of “real vigilante super heroes” movies in the wake of more prominent movies like Kick Ass... it’s also very different in both its intent and its tone.
The movie is of interest because, although the main protagonist Frank D’Arbo, played by Rainn Wilson, decides to “shut up crime” and becomes The Crimson Bolt... he does so without any real knowledge of, or emotional investment in, the four colour heroes that might be expected to have inspired him in the first place. This dysfunctional character, though, has suffered from strange visions all his life and after he loses his wife to a drug dealer... his motivation is to get her back. This is filtered by an overtly and humorously extreme Christian superhero on television (played by Nathan Fillion, no less) whose messages of over zealous purity strike a chord with Frank and soon he is down to the local comic shop and seeking “superhero origin” advice and research material from the owner, Libby (played by Ellen Page).
Libby does her best to point him to the right back issues and he returns, after his first failure at fighting crime, to check out non-super powered heroes and the weapons they use (Batman etc). He becomes The Crimson Bolt and his new weapon is a wrench with which he bops people over the head, usually leaving them half crippled or unconscious and covered in blood...
And here’s the thing...
Although the movie is very much played for laughs, it’s certainly a very black strand of humour and it’s also shot through with the hard question of whether masked vigilantes should be allowed to exist and what the consequences of using violence as a weapon against crime are. And, like the best movies of this kind, it certainly doesn’t pull any super powered punches in this department.
Things start to escalate (or should that be descend) rather quickly when Libby figures out the true identity of The Crimson Bolt and begs Frank to be his sidekick. She eventually wears him down but it’s obvious she is sexually attracted to Frank (who has no interest in this and has a very violent body reaction when she, kind of, rapes him in a fit of lust) and also much more interest with the violent side of the costumed shenanigans as a revenge against the unjust as opposed to attempting to tackle the issue in a more level headed manner. In her first outing as The Crimson Bolt’s sidekick “Boltie”, for instance, she nearly kills someone because she suspects he’s the guy who keyed her friends car. We’re way out of sight of “the punishment fits the crime” here people!
And that’s kinda the point.
Frank is certainly no better. Seriously hospitalising a man and woman because they pushed into a cinema queue instead of going to the back and when “Boltie” saves his life by driving into a man and crushing his legs against a wall with her car (laughing in his face gleefully after the act), he immediately forgives her and they become a team once more.
The violence is harsh, as is Frank’s bad moral judgement when he and Boltie go on their final mission together and he allows her to go with him. It’s then that he learns the responsibility and consequences of taking a teenage girl into the heat of battle with him... and in a way that he finds emotionally devastating, even as he rescues his wife (Liv Tyler) from the clutches of the evil drug dealer (Kevin Bacon) and his friends.
By the end of the movie Frank is pretty much in the same boat he was somewhere soon after the start of the movie... except he now has a pet rabbit and a lot of “proud memory moments” as symbolised by the amount of sketches he’s covered his wall with. He goes unpunished by the law (and seems to have recovered from the amount of bullet hits he took during the course of his short-lived career as The Crimson Bolt) but at the same time you kinda feel that, while he’s probably not learnt much, he has at least rescued and liberated and truly saved the person he most loved in the world (although I don’t want to give away too much about how their relationship continues after that... please watch the movie) and there is a certain sense of redemption by the last few moments of the movie, even if that redemption cost more lives than it was possibly worth.
Super is a film which asks us to consider issues. The film poses these kinds of questions about “at what point the self proclaimed good guy fighting for justice becomes far worse than the criminals he is trying to punish”, without trying to force feed us answers or buy into a certain morality. It’s job is just to ask these things and leave you something to ponder once the movie is done... not ram solutions down our throats. As such, I found Super to be a quite refreshing antidote to many of the bona-fide superhero movies which have played on our screens over the last ten years or so and would definitely point this one out, for the same kinds of audience who are attracted to that kind of product, to add to their viewing list. This one’s definitely worth a look.
Posted by NUTS4R2 at 20:40