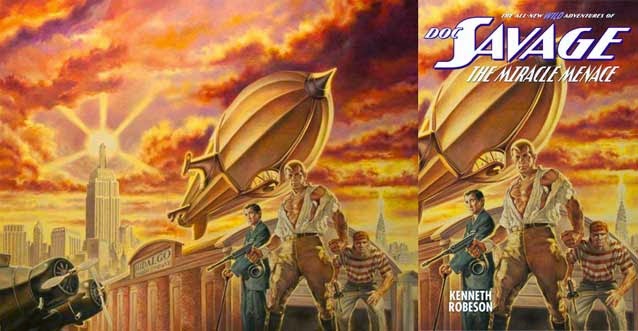 Warning: I’m sorry but, in order for me to talk about what I feel is a little “off” with this novel, it means I’m going to have to set loose some spoilers in here...

Hmmm. I’m going to level with you right from the start of this review and tell you straight up that, as far as Will Murray’s modern Doc Savage novels go, this one is so far the most distressing in terms of its departure from the tried and tested formula which has worked for the character since his inception.

Now I’ve always been a big fan of Murray, ever since he started writing new, additional stories in the 1990s which could be slotted in between various of the original 181 stories in The Man Of Bronze's long, initial 16 year career spanning the years from 1933 to 1949. I was sad when those new 1990s novels finished their run because, frankly, they were great Doc Savage stories and perfectly fit in with the originals written by Lester Dent (using the Street and Smith publications “house name” Kenneth Robeson).

As the new “Kenneth Robeson”, Murray started yet another batch of a projected eight further novels a few years ago and I’ve been reading them as soon as I’ve discovered each one has been released. However, the first of this new batch of releases, The Desert Demons, has kind of a crimp in it for me because the extraterrestrial origin of one of the elements of the story kinda knocked one of the guiding principals of the Doc Savage series... that everything could be explained away by science. Speculative science, perhaps, but Dent was very much a gadget man so when he talked about stuff ahead of his time (like microwaves) then he was pretty sure that it would come into being.

In other words... apart from the very last of Dent’s original stories, and I believe there were good reasons for that particular exception at the time... the endings of the Doc Savage stories always had what I would nowadays call a Scooby Doo ending. The real villain would be unmasked, that is to say, discovered and revealed, and the frankly often outrageous plot mechanisms would all be explained away by Doc, quite rationally and convincingly, with the aid of known scientific knowledge. There were no arguments because Dent rarely strayed too far from the realms of the possible or “almost possible” of his time.

And that’s the big problem with this new Doc Savage adventure too.

The plot deals with a house which perpetually vanishes in one plot line, a plot line which follows Doc and his crew, and with a group of murderous mind readers in another story, with a different bunch of characters... the action cross cutting from one set of characters to another in alternate chapters. This in itself is quite rare in the writing style of the Doc Savage novels. Rarely would an entire half of a story be following a group of previously unknown characters and, although the inevitable happens and the two groups of characters come to together as the two stories interpenetrate and mesh for the finale... it’s not really what I believe Lester Dent would have done structurally with this tale. I’m not knocking it in terms of entertaining and riveting writing... this is another great read by Murray... but I do think it’s lacking in terms of following the formula.

So, as I was saying, we have a vanishing house and a bunch of mind reading criminals posing as a bunch of religious workers. The house, it turns out, can go back in time and then return to the present day of the novel (sometime in the mid to late 30s) and that would explain why the murderous crew of mind reading antagonists are after the original Christopher Columbus. And that’s the set up...

Now, I was kinda worried as I was reading this one because, frankly, Murray was spinning the yarn with seemingly no room for the intervention of the kind of scientific invention needed to explain what was really going on here and, as it turns out, I was right to be worried.

The problem with this story, narrative structure aside, is that the house “really can” go back in time and the crew of murderous thugs “really can” read people’s minds... with the aid of their powers of extra sensory perception. Frankly, this sucks.

It’s not what I expect, or want, from a Doc Savage adventure. He was, after all, a “science detective”. Now I know there was some trepidation on the part of the author, or at least the publishers, on how Murray’s portrayal of the Doc Savage character would be perceived in the previous published adventure, the King Kong VS Doc Savage story Skull Island (reviewed here) but, frankly, I had no problem with that one. In the terms of the chronology of the development of the character, the things Doc did in that particular story made a lot of sense. The Miracle Menace, however, unsettled me far more and got me kinda outraged at the liberties which had been taken with the character. But, if that’s what the writer wants to do then that’s his call. I’ll moan about it once, here, and move on.

Asides from those two sticking points, though, being the scientific impossibility and the narrative structure, I have to say that Murray has done it again in delivering to us a full blooded, entertaining as heck, Doc Savage adventure... with Doc and his aides, asides from being in a scientifically confounding situation, all staying true to their characters and Murray’s even laid on some nice surprise guest appearances for people who are familiar with certain of the original stories. Fast paced, vivid action laced with colourful metaphors and pulse pounding suspense which will have you turning the pages faster than your fingers thought they knew how. If you’re a lover of this kind of pulp entertainment, and you don’t mind the odd liberty or two being taken with the tried and true Doc Savage formula, then The Miracle Menace would be a good one to put on your reading list. If you’re an absolute “Doc purist” however, you might be better off abstaining from this particular entry in the series.