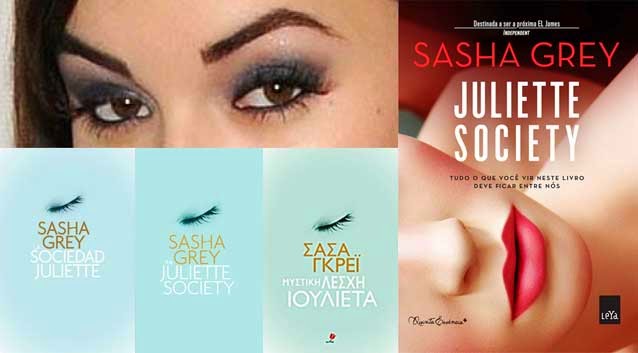 Warning: This review is of a book which deals with material of a graphic sexual nature. Therefore, at certain points, for example when quoting the work, I will need to use language which reflects this. If words can offend you when used in this manner, please don’t read on.

Disclaimer: I am not in any way ashamed of the title of this review although, I am a little embarrassed, perhaps, at how I’ve leapt on the most obvious title for this piece. My only defence is that, when all is said and done, since this book at some times explores similar territory to the more well known title I invoke above, when coupled with the writer’s name, it seems like almost a criminal act not to use that title. 50 Shades of Grey is a book I’ve never read due to the consistent attitude I’ve encountered that it’s both quite badly written and ultimately a little condemning of the lifestyle it uses as its currency... The Juliette Society, for the record, is very well written, as I’ll go on to say in my review.

I suspect Sasha Grey is a name that will be familiar to a certain segment of the readers of this humble blog but, just in case her rising star managed to pass you by somehow, I should probably give you a very quick and dirty character sketch of her career thus far.

She was a very famous porn actress, many might say notorious (although I’d personally replace that term with warrior-like), who has done, on camera, pretty much almost everything sexual it’s possible for two (or many more) humans to do with each other. In her five years (I think I’ve got my sums right?) in the industry she made around 278 pornographic films (at least two as director) and retired from the business at the age of 21. She has always been an advocate of her career choices and waxed intelligently about the nature of working in this environment in an upbeat and joyful manner. She is probably the least person to come across as, in any way, exploited in anything, other than on her own terms, as anyone you're likely to meet.

She then pursued a succesful musical career while also acting in mainstream movies, including working as the main lead for Steven Soderbergh in his film The Girl Friend Experience (which I reviewed here). She then released a photographic book entitled Neü Sex and has followed that up with this debut novel, The Juliette Society.

What this all says to me is she must be a pretty amazing person and I was expecting something really special from this book... a novel which surprised me on some levels, it has to be said.

The story, such as it is, is told in “first person” by a central protagonist called Catherine, a film student who foreshadows the opening of the book with a quick lead into what The Juliette Society actually is, in the fictional world she inhabits. An underground, mobile world of sexual extremes catering for the jaded tastes of the rich and powerful. Since I’ve always believed these kinds of “clubs” existed in the shadows of society anyway, it wasn’t a big step for me to embrace the ‘reality’ of this proposition.

Actually, story is not the best way to describe this work because it’s a novel which is more interested in the detailing of sexual incidents and the exploration of ideas than it is in actual narrative. When I at first found this disappointing because of my prediction of the denouement of the story, I soon realised that I’d had such a good, easy ride getting to that point anyway, because Grey is an extraordinarily good writer, that it didn’t really matter anymore anyway and, certainly, Grey had warned me through her character right near the start of the book that story was not the most important thing to her. Regular readers of mine will know of my insistence that film does not have to be rooted in story and the character of Catherine ruminates from early on in the narrative about the most artistically successful and popular films being subservient to the creation and maintenance of “character” above all else. And she’s right... this is the hook that people respond to in pretty much all film (unless it’s something like, say, Koyaanisqatsi, which has no characters in it at all).

Throughout, the book’s various and interesting topics... such as Catherines attitude to the size and potency of a man’s genitalia, the taste and texture of sperm, the gravitation towards certain sexually charged words over others... are peppered with amazingly cine-literate observations which often seem to fit puzzle-like and snugly into whatever erotic shenanigans the character is engaged in, at one level or another, at the time. Grey is an obvious admirer of French New Wave cinema, for example (hey, who isn’t) and both Godard and Truffaut are regularly returned to during the text of the novel. I quote directly from the text here by way of example...

“Does Marcus ask Anna to lick his balls while he deconstructs The 400 Blows?”

During the pages she makes mention of the subtext of Vertigo, retreads the almost legendary story of the term Rosebud in Orson Welles Citizen Kane being a less than sly and provocative reference to William Randolph Hearst’s pet name for his lover’s clitoris, while fully embracing the cinematic art of Luis Bunuel. In particular, Bunuel’s Belle De Jour catches the eye and mind of her lead character and this ties in with the title of the society tangentally referred to in this work, which gives the novel its monicker, being named not after any Shakespearian reference but by being an allusion to Juliette, the corrupted sister of the title character in the Marquis De Sade’s novel Justine (aka The Misfortunes Of Virtue).

I love the way her central protaginist also mixes up several movie references within the same sentence, such as...

“The path I’m on, you can’t see it. It’s not a yellow brick, the lost highway or a two-lane blacktop.”

When she started referencing stuff like this, along with Godard’s Made In The USA and De Sade’s 120 Days Of Sodom within the first 20 or so pages of the novel, I knew I was in for an interesting ride and I was right. Not because I was 100% interested in where the narrative was going, but because the way she writes about such subjects shows her skill and intelligence in the way she can convey complex issues with a fairly sparse but enjoyable turn of phrase. This one was a very easy read and my respect for the writer as a person has further risen after reading this debut.

Where she really had me though, apart from with her stance that large screened cinemas are the only place to really “see” a movie (I neither agree or disagree, dependent on the nature of the movie, on that one), is when she tackles Stendahl syndrome, a condition that not a lot of people seem to have heard of, for some reason. Named after the author Stendahl, author of The Red And The Black (Scarlet And Black etc.), it’s a condition where a person is overwhelmed physically by a degree of symptoms as a response to great works of art, often paintings. What really endeared me to Sasha Grey here, though, is that she’s also familiar with famous Italian director Dario Argento’s movie The Stendahl Syndrome, which stars his daughter Asia and uses the condition as a plot device to kickstart one of his trademark giallo movies. Grey describes the opening sequence of that film in the early stages of this novel and that really got me on her side.

As I said, the book reveals a quite extreme intelligence behind the writing and while the wordage is quite erotic and graphic, it never really goes full tilt into the physical aspects of the sado-masochistic world it hints at in the earlier parts of the novel, instead concentrating on Catherine’s discovery, acceptance and ultimately aroused curiosity about that world in, what I can vouch for, seems to be a constant pattern when shifting into the world of extreme sexuality... a lady friend or two of mine have had a similar experiences over the years and the raw quest for the exploration of these extreme passions as depicted in The Juliette Society gells quite well, and in some cases quite uncannily, with my own observations and explorations of these things in real life. It’s a cannily realistic book in some ways, if you happen to be a person who has explored such dark and uplifting corners, but also might seem a bit tame, too, for those who have trod that path and become better people for it.

So do I recommend this book?

Well, my dissapointment that the writer chose this particular subject matter for her debut novel (because she runs the risk of people stereotyping her to that kind of output, I suspect)  is tempered by the observation that she is writing exactly what she wants to be writing about and, also, by the fact that the simplicity of her raw intelligence imbues every page with a certain power. So yeah, it’s one I think a certain amount of my readers may enjoy, with the warning that it is, at heart, an erotic novel, and that you need to take into account the subject matter before you start reading it. In fact, Sasha Grey’s opening tease, which starts the novel and is also reprinted on the back cover of the English edition of the book, is as much of a warning too, for fear that those of a feint heart when it comes to matters of talking about sexuality in a frank manner, may have an allergic reaction to the contents. Plus... she obviously well knows the kind of rites of passage challenge behind this particular opening shot.

So my final conclusion on this one would be... if you are into movies and you are into sex, and you don’t mind reading about both, then probably give The Juliette Society a go. I’m glad to have read it, myself, and I’m expecting even greater works from the writer, over the years. Let’s wait and see if I’m right.