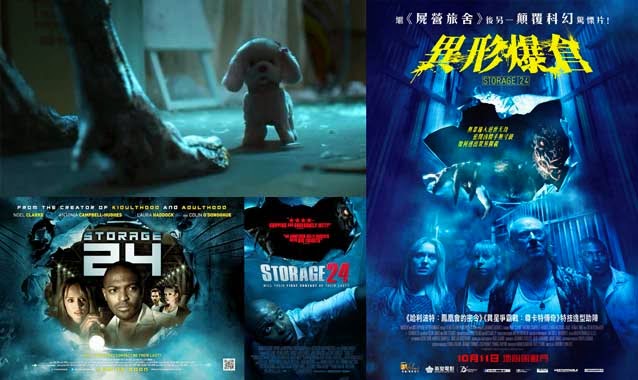 I was kinda desperate to see this movie when it first came out at the cinema... but it was only around for a very brief run, from what I can remember. There was no way I could make an opportunity to see it in the two days I might have had a shot at catching it at that time... even if I’d have known it had already come out. Luckily, the second hand DVD exchange shop in Soho came to my rescue and I was able to pick up this Blu Ray for £4. So that’s handy, then.

I quite like the work of Noel Clarke... who starred, produced, came up with the story and wrote an early draft of this screenplay, from what I can understand. I especially liked his movie 4,3,2,1, which you can find reviewed here. Storage 24 is his take on the whole sci-fi/horror cross-over genre and, although I found it quite entertaining, I think it also has a few problems, if I’m going to be fair.

The film involves some people in a 24 hour storage for hire place in Battersea (I’ve seen a lot of these kinds of places popped up in various locations over the years) and involves a group of friends and acquaintances who are helping Noel Clarke’s character Charlie, and his latest ex-girlfriend Shelley (played by Antonia Campbell-Hughes), go through their joint stuff in storage and sort it out. However, a plane crash in London has caused the storage facility to go into full lock-down mode, with shutters which are only temporarily repaired and reopened to let a couple of the main characters into the storage facility before... yeah, you guessed it, locking down on them again.

As it happens, this storage place is not a good place to be at the moment because a hungry alien behemoth was in a crate in the crashed plane and it has now promptly escaped and is busy using the film’s main location as an “all the humans you can eat” buffet... and that’s the plot. And it’s an okay set up, to be fair. A nice way of getting all your creature fodder together in a confined space so your lead monster can pick them all off while they react to their new situation and work through their personal issues as they are now forced to become heros and villains to each other.

So far so good. Let’s have a look then. Okay, so the good things about this movie are...

Well the performances are mostly pretty good. Noel Clarke is someone who I would expect to turn in a good showing but most of the supporting cast are pretty cool too. Not all of them, to be sure, but that might be more to do with some of the lines of dialogue given to some of them rather than the actors themselves.

You also have some nice little nods to the history of the genre, with some very specific shout outs to the ALIEN franchise in particular. For instance, there’s the engineer who is called in to get the doors working and who then goes down into the dark basement wearing a cap which is the dead spit for the one Harry Dean Stanton wears in Ridley Scott’s original classic. So you know full well what’s going to happen to him.

And this films very own version of an air vent scene, as Charlie and his friend Mark (played by Colin O'Donoghue) are trying to get into various storage bays to tool up with some weapons whilst simultaneously avoiding the nasty beastie hunting them. That’s a pretty nicely photographed sequence actually and, although obviously another nod to ALIEN, it also put me in mind of the  sequence with Sean Connery stuck in the air ducts in Dr. No (reviewed here)... but with much different sound design.

Now I heard a criticism from a friend of mine who said the monster in this lets the film down. I’d disagree with that to a certain extent. I think the make up, prosthetics, CGI or however this one is done is all fine. I think what lets the film down in regards to the monster is that it’s just too damn well lit. Most horror directors know the advantage of only showing little bits of the monster for most of the key scare scenes because, no matter how good or physically scary your monster is, it’s nowhere near as threatening as what your own imagination fills in on the blanks between shots. I think I could have done with seeing a lot less of this guy as the film progressed and would have preferred some seriously groggier lighting during some sequences.

The other thing I think lets this film down to a certain extent is the pacing. Now I’m all for horror movies to be very slowly paced and with nothing much happening apart from the key scare moments... but this one seems to be lingering too long in certain sequences and, although I was personally surprised that this leisurely pace wasn’t working during the first half of the movie, it... well... it just wasn’t. Can’t quite put my finger on why but I felt that certain of the scenes just needed to be a little punchier. Maybe more cross cutting between places might have helped... it just felt too drawn out in certain scenes and my mind went wandering when I should have been more fearful of what was coming next. If you look at a movie like The Descent, for example, they may employ cheap shock tactics in a lot of it but the timing and pacing are absolutely spot on and it’s become a modern horror classic because it just does what it does so well. Here, I dunno... maybe the editing is at fault? Whatever the problem... it is too protracted during sequences and that, ironically, loses the suspense and anticipation when it should have been highlighting it, I feel.

But there’s some nice quirky stuff going on too. A sequence where the monster is somewhat taken aback by a “woofing” mechanical dog in a toy container, for example, or the fact that some of the character arcs don’t quite go in the way you’re necessarily expecting them too (which is always a good thing). There’s also the final shot which shows something I’d already thought of about what’s happening in London outside of the storage facility during the running time, but i’d dismissed it as a real possibility. However, the last shot definitely changes the playing field for our “heroes” in this one and it’s nice that they ended on this idea. It could have been worse.

Ultimately then... for me... Storage 24 is more of a comfort horror movie. Something you screen during a horror all nighter if you want to give your audience a little break from the intensity for a while. If you’re into these kinds of movies then there isn’t really a great deal to complain about here and it’s certainly not going to be a waste of your time to give this one a spin when you get a chance... before you drop it into storage.