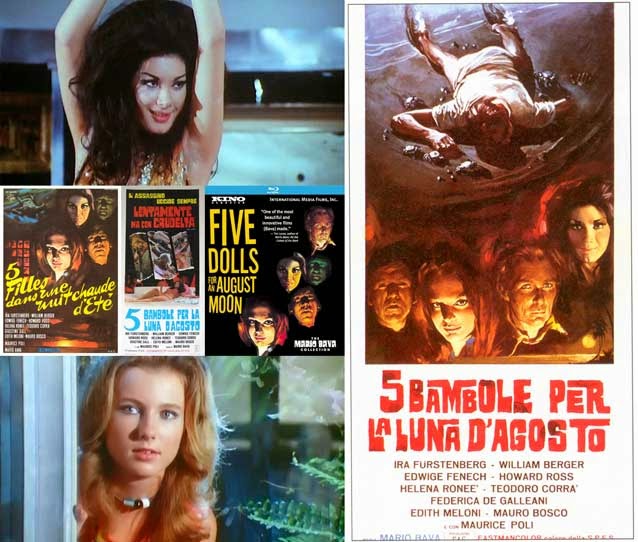 I think it was actor Cameron Mitchell, on a TV interview he did many decades ago, who said of his experiences of working with Mario Bava, that Bava was such a consummate director and cinematographer that you could pause any one of his movies at any place in the running time and you will find yourself with a beautiful, perfectly composed photograph. And, whenever I look at the work of this particular director, who is a favourite of mine in terms of the body of his work taken as a whole, I have to conclude that Mitchell was absolutely right.

I hadn’t watched Five Dolls For An August Moon in quite a while and, since it’s my favourite of Bava’s films, I treated myself to the remastered US Blu Ray of the movie to watch it again, since the colours and compositions in his works are always so great and are well worth the upgrade.

This movie, which is technically a giallo, also has my favourite “giallo babe” Edwige Fenech in it. Now she’s eye candy enough on her own but to put her in a movie directed by the man whose strong sense of colour and perfect compositions could almost make him the person the term “eye candy” was named after, is like putting an extra layer of icing on the most beautifully baked cake. This film is a truly scrumptious visual, and also audio, treat.

The basic story of this film is pretty much a free and uncredited adaptation of Agatha Christie’s novel Ten Little Niggers from 1939. Because the title of the novel took its name from a British nursery rhyme which had a different US equivalent as Ten Little Indians, the American edition from the same year was changed to the last line of that country’s equivalent verse, And Then There Were None. Due to the obvious, historically blind, enthusiastic political correctness of later years, the original title was rarely used after that (although it was still being used in some countries as late as the 1980s) and the second title was used most frequently on publications... and the title was even changed to Ten Little Indians on occasion.

There are a number of movie adaptations of this book under various titles, some credited as such and some not, but this one is rarely included in lists of these, for some reason. Bava’s own later movie Bay Of Blood (aka Twitch Of The Death Nerve) was also a variant of this story, in some ways.

The plot revolves around guests on a remote island retreat being murdered off one by one by a person unknown and, because they are cut off from the mainland, they have to survive until the police finally figure out they’re in trouble and turn up at the island. It’s a simple enough story and it’s very minimal... this version having the object of the killers desire, or so it seems at first, to be a new plastic formula which some of the guests are willing to pay millions of dollars for (and this movie version was in 1970, don’t forget, when the prospect of a million dollars seemed an even more monstrously insane sum of money than it does now).

Of course, the simplicity of the storyline is something that really plays with Bava’s strength as a cinematographer and general all round wizard of the visual side of movie making. To be honest, when the characters start talking to each other, it’s much less interesting than seeing them go about their shenanigans without speaking but, fortunately, vast tracts of this movie are dialogue free and it allows you to concentrate on the sheer beauty of Bava’s compositional eye and his deep saturated colour palette... you enjoy the frames on their own terms.

Added to this is an absolutely tremendous score by Piero Umiliani which is one big, jazzy acid trip of a soundtrack and is easily one of the best, arguably the greatest, Italian chill-out scores ever conceived for a movie. Seriously, if I was stranded alone on an island somewhere and I had only ten records I could take with me, the expanded edition of this score put out by Cinevox a few years ago is definitely one of them (the earlier Cinevox album had a much nicer cover but the expanded and remastered edition is, as far as i know, the only one that contains the Italian rock vocal version of the main song from the end credits). I believe it was Tim Lucas, writer of the gorgeous and exhaustive tome Mario Bava: All The Colours Of The Dark, who likened this movie to being the feature length equivalent of a pop video and, I have to say, I agree with this conclusion whole heartedly. You can just put this movie on for the toe tapping and groovy notes, accompanied by Bava’s stock-in-trade compositional perfection, and you are almost guaranteed to have a good time with it. Just don’t be necessarily into watching this for the journey of the story which, in itself, is kinda dull in comparison. There’s even a point in the movie where a character turns on a radio and the diegetic source music is yet another riff from Umiliani’s score... they obviously knew what they had here.

I can’t recommend this movie enough to anyone who’s into cinematic composition, lighting, jazzy music and, of course, Edwige Fenech dancing and shaking her way half naked to Umiliani’s notes. Seriously, every cinephile should have at least a few Mario Bava movies in his or her library and Five Dolls For An August Moon, with its easy atmosphere and gorgeous colour palette, is a definite must watch movie for lovers of the art of cinematography. The newish US Blu Ray edition is a gorgeous transfer and I’m amazed there’s been no Blu Ray (or even DVD release) in the UK as yet. It’s a crime to miss out on this one.