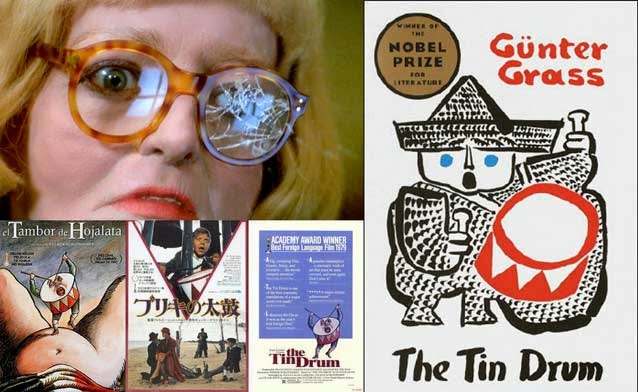 Oskar Out To Lunch

Warning: I guess there are spoilers here...

Volker Schlöndorff’s version of the Günter Grass novel The Tin Drum is essential cinema, no doubt about it. As essential, perhaps more so, as the work it was based on in terms of it’s achievements within its own specific medium.

I remember first seeing this on television in the 1980s and I also remember turning up for a screening of this at the Barbican Centre in London, with a friend, around 10 years later. When we got there we were turned away. The screening had been taken off at very short notice due to “an intervention” by the BBFC, or at least that’s the reason we were given at the time. I didn’t know what the issue was, especially since it had already been shown a number of times on television prior to the attempted Barbican screening, but there we were, with our wasted train tickets, on a jaunt down to London for a screening which didn’t happen. I’ve never known, to this day, what happened then but I did notice a distinct absence from that point on, in screenings of this particular film at cinemas. After a while (a few years) it just quietly came back and then it was business as usual for The Tin Drum, it seemed to me.

The Arrow Blu Ray dual edition I recently watched is something very special indeed. Not only does it have the original theatrical edition of the film on there, along with the usual slew of extras on a second disc...  it also has a 2011 “director’s cut” of the movie which is considerably longer than the original, by about 20 minutes.

To those who don’t know the work in any medium, The Tin Drum is narrated by its central protagonist Oskar (played in an extraordinary performance in the movie by David Bennent), a little boy whose thoughts and philosophy’s are fully formed from birth (possibly before) and who is forced from his mother’s womb, probably against his will...

“Only the prospect of the tin drum prevented me from expressing, more forcefully, my desire to return to the womb.”

Oskar has, in addition to a fully formed brain which he keeps to himself, a number of talents... one of which is his decision to not grow from the age of three. To cover up for this strange talent, he deliberately throws himself down the stairs into the cellar to give the grown ups an excuse as to why he no longer grows or ages after this incident. That’s one slightly wrong note which the film delivers, to my mind. If you are not fully understanding of Oskar’s thought processes, by this point, the way this incident is presented in the movie, against Oskar’s narrative voice-over, makes this incident possibly look like a suicide attempt... thus nullifying Oskar’s cunning until this side of him is unearthed properly during later incidents.

Another talent of Oskar’s is his ability to emit a loud, piercing scream which can shatter glass. It’s not just breakages which Oskar can cause with his vocal talents, however. Towards the end of the movie it is revealed that Oskar has perfected his talent to such an extent that he can even use his voice to etch pictures in glass. This is another surreal moment in a film which is full of such celluloidal magic but, it has to be said, the film is a little more black and white in its presentation of the specifics of the story than the actual novel is.

In the novel, it is clear that Oskar is telling his story from a sanitarium, well after he has come to the decision to decide to grow up. The story is pitched so you never know whether to take the things Oskar tells you as being the truth or whether he is, in fact, just an insane man. The film eschews this in favour of presenting the narrative as is, a gospel truth at 24 frames per second, and I’m never quite sure if this was a good call with this story or not. Something I’ve never made my mind up about over the years.

The whole thing is, of course, a fantastic and imaginative way of showing the rise and fall of Nazism from the observers at ground level, although I’m sure a lot of the political stuff is lost on someone like me. Oskar is a boy who lives in a house where the portrait of Beethoven has been replaced by a portrait of Adolf Hitler. As he himself says about Nazism, to the viewer, dependent on which translation you are reading...

“There was once a gullible people... who believed in Santa Claus. But Santa Claus was really... the gas man!”

The shot set ups are not necessarily beautifully designed, but they do take on a certain beauty of their own in terms of detail and the very leisurely pacing. The camera doesn’t move around a heck of a lot, there are a lot of static shots and cuts, but when it does, it’s usually very slow moving and because of the lack of rapid movement, tends to drag you into the work in a voyeuristic manner.... you feel like a fly on the wall, witnessing the events rather than experienceing them with the characters. This, of course, sometimes makes it even more unbearable to watch in certain places.

There’s also a great contradiction with shooting this film in this style because, the subject matter does get quite surreal and some of the shots match this. A shot or two of Oskar in the womb, for example, followed in one case by a sequence where we, the camera eye, are pushing out from between his mothers legs... or a scene which I think is a new one, where some nuns are shot for trespassing and we see their souls rise to heaven. Or the way the film goes into slow motion and the camera falls, gracefully, with Oskar as he throws himself down into the cellar. Some of this stuff, especially the womb sequence, is very similar to the kind of artificial insert shots that Dario Argento sometimes inserts into a sequence and it’s interesting that the film uses this kind of visual language because, when it’s pitched against the leisurely, almost naturalistic style of shooting, the voyeuristic sensibility actually strengthens the scenes of a more incredible nature and therefore bolsters your ability to suspend your disbelief throughout the, quite long, running time.

Legendary film composer Maurice Jarre’s score similarly helps to push the effect of some of these visuals, coming across all sinister and off kilter in certain scenes which tell you something magical... or possibly fairly disturbing... is about to happen.

The new blu ray rendition of the The Tin Drum is fantastic... the film still has kind of a soft look about it but still has a lot of definition/detail without the feel of the original film stock appearing to have been lost in translation or diminished in the remastering process... at least that’s how it looked to me. I’ve not checked out the extras yet but I think some of them are different to the old US Criterion edition of the film, especially (and obviously) those related to the new director’s cut. This was money well spent and, frankly, anybody who is into cinema should probably put this on their “must own” list. It’s a film I expect to revisit every seven years or so and the charm juxtaposed with a traumatic time in history never seems to wear thin. Definitely recommended for cinephiles and casual watchers alike... especially in this new blu-ray, director’s cut edition from Arrow.
Posted by NUTS4R2 at 20:56