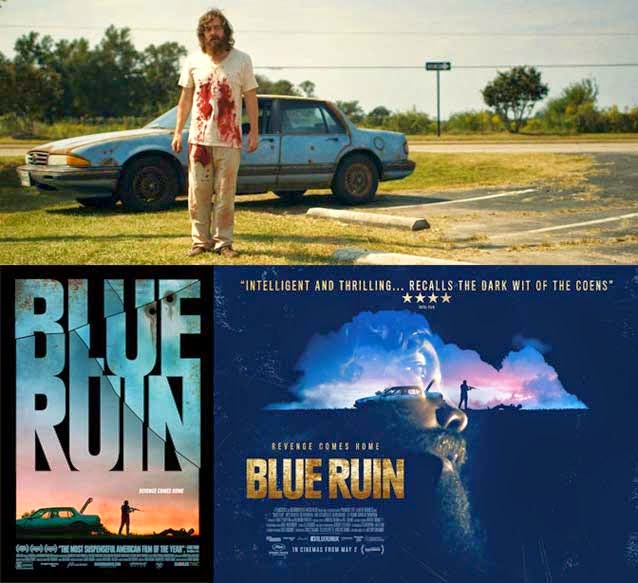 The Scarlet And The Blue

Warning: Some possibly mild spoilers here from the first 20 mins or so of the film but... nothing which is going to ruin it for you if you decide to read this.

You know, this is a pretty amazing little movie and it needs to get more attention.

Dwight is pretty much a drifter, living hand to mouth and sleeping in his permanently parked car (the fuel tank is empty and the battery is taken out until needed). He seems a nice, harmless... perhaps even slightly loopy... guy, although the cleverness of his survival tactics throughout the introductory scene and then into the hostile environment of the movie proper, certainly push the point home that, despite his timid nature, he can be a shrewd, clever, resilient man... when he needs to be.

Which is good because, when a friendly police woman pulls him in to break the news that the man who killed both his parents is being released on a plea bargain, our hero goes on a kind of “softly, softly” rampage of vengeance, sparked mostly by the fact that he thinks the guy released will almost certainly come after him and, more worryingly, his sister with her two kids, if he doesn’t.

Now this film delivers so much more than you’d expect from the trailer and I’d have to say that the arc of the story as I was expecting it to play out from watching the previews, actually finishes within the first 20 or so minutes of the movie. The guy he goes after dies, quite violently and bloodily, by Dwight’s hand, fairly early on in the film... but then things get kinda complicated. I don’t want to say too much but, various characters including his sister, his friend from school who he hasn’t seen for years and a clan of death dealing tough nuts, all get embroiled in a revenge thriller which proceeds from the hard truth that not all the facts about the original incident from years before the film starts, are necessarily as they at first appeared.

Add to the mix a gazillion different kinds of guns and you have a film which is not only a very taut and suspenseful thriller... but also one which doesn’t go the usual Hollywood route in the way it tells its tale. It lacks the kind of glossy, action romp mentality and over-disclosure dialogue of the big budget end of commercial film making and, instead, tells the story with a raw edge to it.

I may have talked about my views of the “cinema of reflection” before on my blog, I can’t remember, but my take on it is that you don’t need a whole bunch of dialogue to chime in and interrupt the thoughts of the characters as you tell your story if you don’t want to (and I love well written dialogue, believe me). Sometimes it’s good to just let an actor be alone in a room and use body language and the reactions of that character, in any given situation, be the expression used to drive the scenes. To disprove any theory that says otherwise, you just need to watch any ten minutes or so of Blue Ruin to see a director (and lead actor) who truly knows how to use space and ambient sound design to give an audience an electrifying experience.

Large chunks of this movie, probably the majority, in fact, are free from any kind of significant wordage. The story is empowered by the actions of the characters and there are few conversations in the film. It’s a film which also takes you by surprise much more effectively than most others out there, possibly because of the lack of that amount of verbal spoon feeding throughout.

One point where the movie didn’t take me by surprise though, about half way through when you think it’s just about curtains for Dwight and his quest for the truth, is clever in that it involves his high school buddy who wants to train up Dwight to be able to look after himself in the situation he has found himself in. He says something to him, which I’m not going to repeat here (but lovers of the animated film The Incredibles will probably know what I’m talking about) and the final outcome of the movie, and which characters survive and which don’t, can be exactly attributable to the piece of advice his friend gives him. It must have been very satisfying for the writer, or whoever, to throw that line in at that point and, although for me I was pretty certain it was an important line at the time and it did kinda foreshadow the movie’s denouement a little, there was another little sting in the tail about the identity of another character revealed at the end point which I hadn’t seen coming and that kinda made me forget about this revealing line until after the movie had played itself out.

Actually, there’s a scene just after Dwight leaves his friend for a second time that I suspect may have been written for the end of the movie. Its a little sequence of shots and I was wondering why we were lingering on them when the other character was supposed to have exited the film. I suspect they were relocated from the end of the movie in a later editing decision... but the movie ends pretty well anyway so, maybe so and maybe not... but it doesn’t really matter. More intentional foreshadowing, perhaps?

Another great thing about this movie is the nature of the main protagonist, Dwight, played so well by Blair that he deserves some kind of medal or... you know... maybe an Oscar for his performance here. He’s not Sly Stallone playing John Rambo. He’s not Schwarzenneger as The Terminator. He’s an average Joe Bloggs who finds himself in a situation that he has no qualms about seeing through... but which he’s not particularly built to handle either. So... despite his resourcefulness... you see him failing to do things right a lot of the time.

For instance, trying to get a security lock off a gun which has accidentally fallen into his hands, ends with the gun destroyed and useless but with the lock still in place. A scene which takes time out of the story to highlight the frailty of the character in certain situations in order to make him more believable... which is something most Hollywood movies probably wouldn’t bother to do. Another scene, which is a parody of the kind of self repair scenes you would get in exactly the kinds of movies I just mentioned above, is well intentioned but doomed to failure and he has to seek help from a hospital when he fails to fix himself after a vicious wound. This is all good stuff and I really appreciated these little scenes, used to ground the character in reality a little more than usual.

The shots are very cleanly designed, for the most part, but they’re not overly flashy and the colour palette, while not dingy, is certainly not the brightly lit and vibrant colours you might expect would be used to compliment that kind of shot design. The director also knows how to tighten the pace and ramp up the suspense in this movie too... choosing almost static set ups for some scenes, as we watch the character living his life in the kind of pacing which I would associate with an early 1970s movie (and that’s certainly not a bad thing) and then switching to very tight, hand held shots following the character around jerkily when he wants you to feel caught up in the action at various points. This all works very well and I did, indeed, find myself getting quite anxious and critical of the actions of the character in certain scenes... something which doesn’t happen to me often at the movies, these days. So that was much appreciated.

At the end of the day, what more can I tell you?

Blue Ruin is an unbelievably well executed, “press the right buttons” thriller which allows itself to get its hands dirty at key points, with some quite gory violence... the kind you really feel... at various places within the running time. It’s stylish, edge of your seat, visually dominant suspense cinema at its best and, if you are into the history of cinematic revenge thrillers and appreciate the moral questions they bring up, then you’d be a fool not to catch this one at your local cinema while you still can. Go see it. Now.