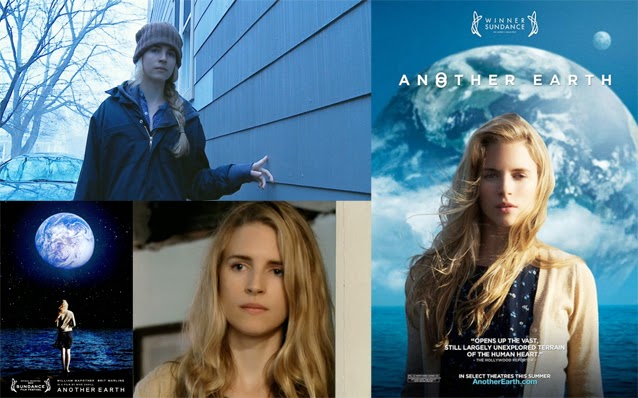 Warning: Slight spoilers on the set up,
mostly found in the trailer anyway.

Another Earth is the previous feature made by the same guy who gave us the recent cinema release I raved about called I Origins (reviewed here). It stars Brit Marling, who also co-wrote this... just as she did another film with her in it, called The East (reviewed here). It’s a film I really wanted to see when it was originally released in the cinemas over here in the UK but, like a lot of US independents (the ones that get any kind of release over here at all) it only lasted a week at the cinema and I missed it. But I Origins reminded me about this film and with some extra prompting from @sawlady on twitter (the gal who plays the musical saw on this film’s soundtrack), I sought out a cheap Blu Ray and am really glad I decided to acquaint myself with this movie properly.

I’ve often mentioned this before in some of my reviews, I’m sure, but there are a lot of science fiction movies which are just an excuse for B movie Western shenanigans in a specific, conceptual reality...  and then there’s the really good science fiction which is more in line with what the best literary sci-fi does... which is to use a science fiction concept to explore something which is a magnification of a real life concern. If you want to explore an emotional issue like the spectre of loneliness or a human failing like a reliance on drugs or alcohol, or a world of other things, then you can use a sci-fi concept to push the analogy you’re exploring to a point where you couldn’t get to if you were just surrounded by the trappings of a normal drama.

That’s what Another Earth does. It’s the best kind of sci-fi. It takes a concept which is, to be fair, way more in your face on the trailer than it is in the movie. This is then used to inform the drama rather than exist as its own phenomenon, utilising the premise to expand where the characters can go with their emotions in a way a normal dramatic movie couldn’t.

The film starts off with a science major called Rhoda (played by the aforementioned Brit Marling) about to embark on a promising career (do all of Mike Cahill’s movies start off with a party scene?). As she drives home one night she hears the announcement that a new planet, what looks like an identical match for Earth, has appeared in the Universe and will be getting closer to our orbit over the next few years or so. She looks up out of the car window as she is speeding along to try and catch a glimpse of the new planet. Parked in another car is a composer, John (played by William Mapother), who is in his car with his wife and very young son. As Rhoda looks up at the heavens her car speeds straight into John’s in a head on collision. She escapes the wreck but there’s no signs of life from the anyone in the other car... nor from the dead toddler she stands over in the road.

Cut to a few years down the line. Rhoda gets released from prison where she has been doing time for manslaughter as a result of the crash. She is a depressed, guilty individual who lives at home and wanders about day by day as though she is a almost a zombie... her joy of life crushed by the horrible accident. She takes a job at a high school as a cleaner (although her employment adviser reminds her that she is so smart she could get a really good job) and that’s pretty much her life. Until she finds out that, although John’s wife and child were killed in the crash, John himself was just in a coma for a few months and is living not too far away. She goes to seek him out to apologise for wrecking his life (as well as her own) but ends up not telling him, posing as a cleaner, and getting an unpaid job (only she knows she is not getting paid) where she goes to clean his house every week. The two get to know each other and bond but Rhoda has not yet told him her terrible secret.

While all this is happening, the science fiction concept of a second Earth is gently playing in the background. When a lady at NASA finally gets through to the other planet, she is greeted by the equally startled same lady from NASA on the receiving end, who she quickly discovers has an identical life to her own, including small details of circumstance. A trip is planned to take a crew of explorers to the other Earth and Rhoda enters an essay competition to win a seat there. Presumably, the same thing is happening on the other version of the planet. Everybody is faced with the fact that they have a carbon copy who has lived exactly the same life on another planet except... and here’s the thing... the sudden appearance and awareness of each other’s planet changes things and, from the moment they became aware of each other, that’s when people’s timelines on each planet began to deviate from each other. So the question for Rhoda is... did the accident even happen on the other Earth? Did John’s wife and son survive on this other planet and, if so, how will all this impact on her new, developing romantic relationship with the man whose wife and son she inadvertently killed?

Another Earth is a beautifully shot film and it’s one of those pieces of cinematic art which understands very well that less dialogue and long periods of reflection without words can say so much more, sometimes, than the current popular style of "overly talky" cinema. It touches at both the heart and the mind of the audience at the same time and, as a result, it’s truly breathtaking and inspiring. There’s some real nice uses of colour and composition, especially in the early car sequence where the director utilises cool shots which are fractured through reflective and transparent surfaces. Truly lovely stuff.

This film, as you may have figured out by now, is a film about atonement and, with the dangling carrot of another world filled with identical people with identical personalities, there’s even a possibility of partial redemption for Rhoda’s character at some point down the line... which is, of course, an element to the drama the writers and actors would not be able to explore without the presence of a science fiction concept lurking at the heart of the story and, like I said... Another Earth is good science fiction. Soft science fiction like Philip K. Dick might have written, for sure, but that just means it’s the best kind of science fiction there is, as far as I’m concerned.

It’s also extremely well acted, well edited, has a nicely appropriate score (that goes on my Christmas list, I think) and, as I implied earlier, its very much a film which is a good example of the cinema of reflection. Quite frankly, if you want someone who is a fantastic actress but who can also just stand around looking thoughtful and be the one presence in a frame you just can’t take your eyes off, then I think Hollywood should be waking up to the fact at some point that Brit Marling is definitely your go-to girl for this kind of stuff. Absolutely astounding actress and someone who I shall definitely be looking out for in future movies... I usually just crush on following the directors and composers unless both the acting and screen presence of a performer is extra special and Marling has “that kind of special” in spades, if you ask me.

So there you go. Another Earth. Astonishing movie and a very strong and firm recommendation from this reviewer. One of the best movies I’ve seen all year and I really regret, now, missing it at cinemas on its first run release. Grab a look as soon as you get an opportunity.
Posted by NUTS4R2 at 20:11