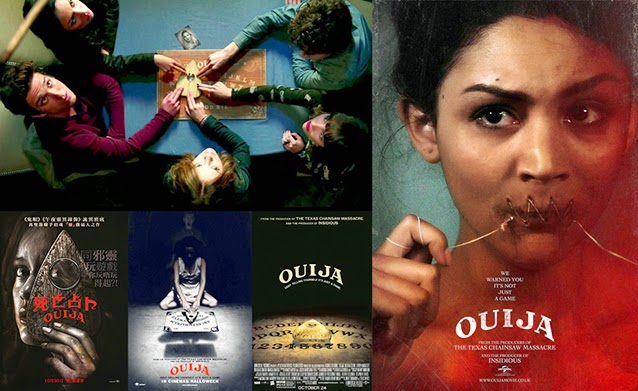 Ouija Look At That

Okay... so this is one of many, many films called Ouija including, notably, a Filipino one which has an alternate title in English speaking countries, Seance, and which has exactly the same kind of set up and plot details as this one. On the IMDB this new one is listed as being a remake of that earlier film although, it has to be said, the film-makers don’t seem to be owning up to this right now. I’d have to say that, if I’d have known this was a remake of another movie, I’d have almost certainly not bothered to go and see this version of it.

Hasbro seem intent to brand it as a movie about their “board game” but, frankly, as far as I’m concerned, Hasbro’s claim to the whole Ouija Board thing is more than a little shaky. Spirit Boards used to contact dead souls date way back to around 1100AD (which was their first recorded use) and finally, after many years, as a commercial item for sale to the general public back in the 1890s. It was then rebranded as a Ouija Board in 1901 before the rights to make the boards were sold to Parker Brothers in the 1960s. The rights were then bought by Hasbro in the 1990s so, why Hasbro are gung ho that this movie is about their board game is a mystery to me. I guess they can kinda claim ownership of the legal rights but, certainly not the concept or the fact that there have been so many Ouija boards over the years. Maybe they’ll try to claim Chess and Backgammon at some point soon too. Who knows?

MIchael Caine once famously said something along the lines of, “Nobody sets out trying to make a bad movie.” He was talking about The Swarm, one of the most ridiculed films in cinema history (although Goldsmith’s score rocks it). I guess you’d have to give the cast and crew of Ouija a shout out for also trying hard not to fail at this lark and in certain areas they do seem to get things right... but only in certain areas. Let me shout out the positives on this one first because, I suspect this is going to be a fairly short review and I want to get out the fact that there are some good things in this movie.

Okay. So number one is that the actors and actresses playing the teenage protagonists of this movie are all pretty acceptable in their roles although, it has to be said, the dialogue they’ve been given would challenge even the most gifted actors in the world. The dialogue maybe would have worked better if their had been a camp element to the way it was played but I’m guessing this is not what the movie makers would have wanted. The only saving grace, perhaps, is that the characters all seem like nice people, at least. Saying that, though, this particular tactic didn’t make me miss any of them as they go to meet their various appointments with death throughout the movie.

Positive thing number two is the fact that the special effects and design of the ghost creatures works very well. There’s a creepy aspect to a ghost with her lips sewn shut anyway but when it comes to the final version of this particular creature, she comes across as, kind of, a spirit version of Gollum from Lord Of The Rings and she’s quite effective in being an intimidating and malevolent spirit. So that’s a big plus right there.

The third good thing about this movie is the score by Anton Sanko which, to be fair, does use all the modern horror scoring tricks you would expect (because that’s what’s appropriate to the visuals the composer has been given to work with) but also manages to bring in a strong melodic content and throw that into the mix. That’s something that a lot of horror scores seem to lack these days so it made for a refreshing change to hear the scary stingers augmented by some cues with a tune. Works quite well.

Okay... so now for the reasons why I really never want to see this film again.

There are some big problems with this movie and the first one is that it tries, like all horror films do, to scare the life out of an audience using all the old tricks that you can think of. Nothing wrong with that and, I have to admit, on the few occasions they got it right I did jump out of my skin. However... there were only a few times they did get it right, to be honest. You will know where every scare is coming from, which isn’t in itself a disaster at all, but the timing is way off for most of these moments to be effective anyway. It seems somehow sluggish... I don’t know if the way they’ve shot it is telegraphing things too much but the editing didn’t seem to be doing it any favours in many of the scary scenes, it seems to me. Everything seems to play for just a little longer than you need it to in order to jump to those scares effectively and, if anything, I thought there was a certain clumsiness to it when it comes to executing the technical make up of a horror film in this one... so there’s that.

As I touched on before, the script is also pretty bad. You can see the wheels turning behind the writing all the time and it’s a very teen oriented flick. You can also hear the writers thinking, “Okay, time to find a reason to clear out all the adults from the film” after about ten minutes into the movie and that’s exactly what happens... barring a couple of key scenes regarding two older women that are the minimum absolutely necessary to keep the plot going. And added to this, the crimes of the script are compounded by the fact that the dialogue coming out of the mouths of these teens sound antiseptic and lame. I don’t remember any teens ever talking like this outside of a film before... these are definitely “movie teens” and their credibility is blown right from the start, I’m afraid. This is another element, as above, that makes sure I don’t care what happens to any of them and it’s such a shame because the actors and actresses involved seem to be doing the best with the lines they’ve been given, to be honest... at risk of repeating myself.

And that’s as far as I’m going on this one. Ouija could have been a really great scare movie, as it has a lot of the right ingredients going for it but... it’s not. If you are a fan of scary movies in general then you’ll probably have an okay time at the cinema watching this one... but that’s all it’s likely to be, I suspect. An okay time. If that’s what you’re going to the cinema for then it’s fine to make do with that but, with films like The Babadook (reviewed here) and, especially, The Conjuring (reviewed here) raising the bar so much, then it’s safe to say that there are a lot better horror films out there that you could be spending your time with rather than this thing. Let me know what you think, though, because I suspect this movie might polarise its audience a little... possibly dependent on your age.