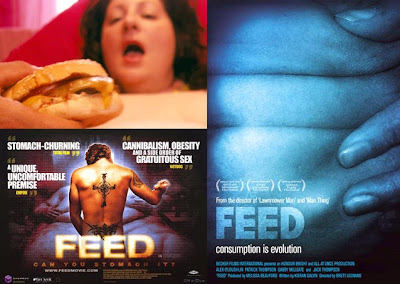 I bought this, bargain bucket price, because it was one of many recommended to me by Kier La Janisse via her amazing book House Of Psychotic Women (reviewed here).

To be honest, because of the venue I read about it in and the nature of a lot of the films mentioned in it, i was expecting Feed to be a lot more extreme and exploitative than it actually turned out to be. In fact, it’s not really either. In terms of the potential shock of the subject matter... a serial killer who literally, over the course of time, feeds women to death for his web site and then lets people gamble on the odds... well, their have been feeder sites around for years so, unless you have been very naive on your internet wanderings, I suspect most people are not going to be shocked by either the subject matter or the way in which it is presented now. I remember accidentally stumbling onto one of those kinds of sites over twenty years ago on the internet, so I’d be really surprised if there are too many people out there who are going to be grossed out by the content.

The real eye opener for me on this one, however, is the fact that I was expecting a more exploitative, shocker of a movie and got instead, something which is very well shot and imaginatively put together on the technical/artistic front.

For example, the film starts off with a driver in a car and his view through the windscreen, in much the same kind of POV route that Scorcese’s Taxi Driver and a load of 1970s gialli went for. However, when the colour palettes suddenly shift and you realise that you are not always looking at the same driver, you start to grasp that something else is going on here. The film, as it turns out, is set in three International locations which include Germany and Australia, with the main action taking place in the USA. The director pushes the location switches, as scenes are crosscut between each other, with the use of different colour filters for different countries... so one set of scenes will have a predominantly blue colour palette, for example, and another would have yellow as the dominating hue.

It’s all about contrast and the director uses these contrasts to also highlight the, initial, differences between the main antagonist, Michael Carter (played by Alex O’ Loughlin), and the Australian cyber-crime investigator, Philip Jackson (played by Patrick Thompson), who follows his trail to America in an effort to stop this killer's curious brand of slow death. For instance, Carter is mostly seen performing sexual acts involving food with various women five times his size whereas Jackson has a very restrained woman who is on the skinny side in comparison. Carter is very confident and upbeat with women while Jackson, the alleged hero of the piece, is actually in a very strained relationship where he lashes out rather than talk out problems which arise... and that’s kinda interesting actually.

I think the fact that the “psycho” villain of the piece is actually the one portrayed as intelligent and articulate in comparison to the protagonist is an interesting switch and Nietzsche’s much misquoted old chestnut about a man hunting monsters first having to become that monster/gaze into the abyss etc... is almost too relevant for both the path and confrontational relationship these men have over the course of the film. Despite the final sucker punch before the credits roll, it almost seems that the “hero” character starts off as a bit of a monster before he even finds himself getting involved in Carter’s crimes.

The film has a lot to offer it in terms of very fluid, smooth camera work and some nice colourful shot compositions. Pretty much all the performances are wonderfully credible, including the latest victim of the piece, Dierdre, played by Gabby Millgate, who was actually wearing a specially designed “fat suit” for the role... which I find incredible. Since she’s pretty much naked in bed for the entire movie... I have to say they had me completely fooled. I’d just assumed they’d used a real life feeder or SSBBW*  for the role but, nope... so you can also add here that the special effects are really convincing.

There’s a downside, however, in that the film seems a little too stretched out and drags a little at times, especially when the two male leads are in confrontational conversation. The theory behind why Carter has embarked on his “slow serial  killing spree” becomes somewhat over done and, for all the eloquence of the delivery of the lines, somewhat clichéd and pretentious. I think the movie may have worked a little better if some of the dialogue sequences between Carter and Jackson were pruned a bit.

Another thing which let me down a bit was the “quick n’ easy” join-the-dots nature of Jackson’s investigation and the oft used revelation that the lead villain has a childhood motivation for this crimes as an adult... crimes which keep flashing back to us as an audience when the writer thinks we need reminding that behind the seductive dialogue of the lead antagonist, he's actually a bit... you know... mentally disturbed. Frankly, since the main protagonist is equally flawed in his pursuit of the villain of the piece, I would have at least liked to know of any similar background to his character to drive him so obsessively into a personal manhunt against the killer. For a film which admirably attempts to grey the areas of the “good cop” versus “bad guy” formula, I think this was a bit of a missed trick in terms of character motivation.

That being said, though, the film is not a bad one to watch. In terms of cinematography and art direction, it’s really very good... especially during the first half of the movie and it certainly held my attention for a while before I found myself drifting in some of the confrontation scenes. It also has a nice kicker of an ending which, although it’s not a “saw that one coming” kind of ending, still is quite a nice touch and I’m really glad that the director chose to dump the extended, alternate ending to the film, which is included as an extra on the DVD and which, in my opinion, starts to push at the edges of the credibility of the story.

So then... Feed. Is it a horror movie? No. Is it an exploitation movie? Well, to an extent but the care and detail in the way it is shot, written and performed undercuts any visceral level of entertainment, I suspect. It’s not going to deliver an extreme experience, if that’s what you are after, but it is a nice little watch and, if you’ve not actually pondered the nature of beauty and the way it’s portrayed in the media before you see this, then you may find it quite interesting. Personally, I don’t think Feed is a particularly great movie but it’s certainly no dud. I probably won’t watch this one again anytime soon but I do think there is a certain audience out there for this movie and I suspect a lot of fans of serial killer type thrillers, especially the youngsters, will find a lot to like in this one. And like I said, it’s technically very well put together so, you know, if you’re not doing anything better one night... you might want to add this one to your list.