Doctor Who: Death In Heaven 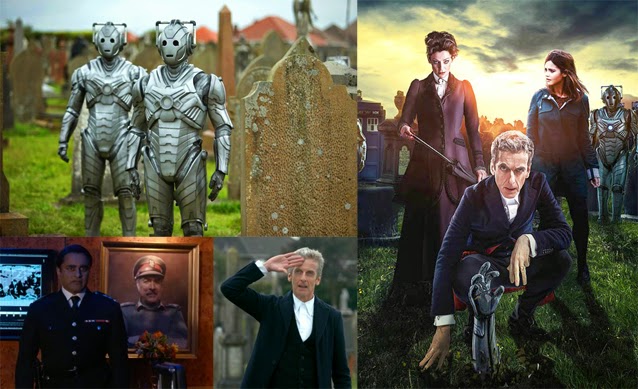 Carry On Up The Cyber

Warning: Yeah, I suppose there will be spoilers here, if anyone’s still holding out for a good season finale.

Not sure I have too much to say about this episode, following on, as it does, from last week’s overplayed Missy as The Master subplot which, to be fair, didn’t leave much breathing space for anything else. That being said, there were some excellent ideas and concepts which were, mostly, nice additions to the world of Doctor Who. My real gripe about this is that, for all its many parts, many of them good but equally tempered with things which were either dreary or compromising to good drama, this episode, like this year’s series, never seemed to become anything greater than the sum of its parts. Which is a shame because when some of those parts are somewhat broken or ill-advised, you’re left with a vehicle which will get you from A to B without too much trouble... just not in style.

There were some really great things about last nights episode. For example, the addition of the Cybermen coming back from the dead. The iconic idea of Cybermen literally rising from their own tombs and the symbolism of resurrection from the dead has always been a part of the show. When Troughton’s Doctor saw them rising from their tombs in spectacular fashion in Tomb Of The Cybermen, it was a much loved and remembered part of that generation’s audience for the show and I remember myself the impression the similar scenes in the Peter Davison story Earthshock had on me when I was in my teens. So even the title of this week’s show, Death In Heaven, carries on a long legacy of the Cybermen being associated with the imagery and terminology of death. This episode we had an excellent addition to that established continuity with the writer combining the cybermen with the classic imagery of films like George A. Romero’s Night Of The Living Dead and subsequent movies in the “modern zombie” cycle (although perhaps it’s best to go back even further than Hammer’s Plague Of The Zombies, to the 1940s Universal Mummy franchise, to find where the idea of the undead rising from the earth first started on film). So the Time Lord hard drive returning the downloaded “souls” back into the dead as Cybermen and then having them burst out of graveyards was one of a few welcome additions.

Another was the appearance of an old Cyberman helmet from the Patrick Troughton/Tom Baker days... that was good. A bit of a throwaway reference but, so too, was another nice little highlight... the "painted" portrait of Brigadier Lethbridge-Stewart, as played by the late actor Nicholas Courtney, on prominent display in a U.N.I.T aircraft.

There were, however, a lot of mis-steps.

Michelle Gomez incarnation of The Master was a little better but ultimately too little too late and, killing her off (allegedly) like that was a terrible thing. Although, I’m not 100% sure that when the Cyberman incarnation of The Brigadier vapourised her, it was simultaneous to The Doctor saying a set of co-ordinates that could have been a signal for someone to teleport her to safety... or at least get zapped into a... well.. a Time Lord hard drive, for instance? A case of “spoilers, sweetie” perhaps?

And also, as much as I like the homage to the memory of The Brigadier, I’m not sure the character would have chosen to be reincarnated as something he’d spent so much time fighting in the 1960s. I was kinda unsure how to react to the scene at his deus ex machina return at so opportune a moment. I guess we’ll never know what the late Nicholas Courtney would have made of it... I hope he would have at least liked the acknowledgment that the part he played, on and off, for so many decades and opposite so many Doctors, was so well loved and cherished in the series.

I do think The Master’s demise in this manner was preposterous in terms of making it hard for the writers when that character next returns. In the 1930s, the Flash Gordon serials kept killing off Ming The Merciless in the last episode and then had to skate around the issue each time they brought him back in the next serial because they’d kinda wrote themselves into a corner. You’d think that writers these days would learn from the mistakes of the past but, in this case, I think not.

The also killed off a very promising character who, by all rights, should have actually been a Zygon (since the storyline in The Day Of The Doctor - reviewed here - was never actually cleared up or properly concluded, if you’ll recall). I think this was a bit of a mistake but then, there’s always the Christmas special to undo things, it seems to me. I’ll get on to that in a moment.

There was a sense of real loss at the end of the episode and I was really congratulating the writers near the end of the show which saw a bitter Clara and a bitter Doctor both putting on a brave face for the other and both lying about what had just happened to each other... both thinking they were sacrificing a part of themselves for the other. They said goodbye and then that was it... a dramatic ending. Unfortunately, they couldn’t even do that right because we had a mid-end credits sequence where Nick Frost suddenly appears to The Doctor as Santa Claus and basically says this is not how it should be. Now, alright if they want to bring everyone back from the dead (Danny Pink’s great great grandson, or whoever he was, couldn’t have existed in this timeline, or MIssy’s, if these events were irreversible), but this was a seriously dramatic ending ruined by the fact that the BBC couldn’t wait to give us a hint. It’s only seven weeks until Christmas people. It’ll keep. Why pre-warn us in advance? That’s just dumb. And it also ruined the drama of the moment... no matter how much I want to see Nick Frost playing Santa Claus. It’s like the BBC saw a moment of real pathos unfolding in their drama and said... “Oh, we can’t have that. Let’s put in a jolly fat man to lighten the mood.” Pathetic.

Overall, this was not my favourite episode and nor was it my favourite season. Peter Capaldi, Jenna Coleman and Samuel Anderson have all been outstanding in their roles and are always watchable... but the stories and plot devices they were left to perform seems to me to have left them bereft of something really great to make a contribution to. Still, if there is another season commissioned, and I sincerely hope there is because Capaldi is really right for the role and is knocking it out the park in terms of inhabiting te character and making it his own, then I look forward to it with interest. Despite my grumbles, it’s still one of the best and most well loved TV shows in British television history.