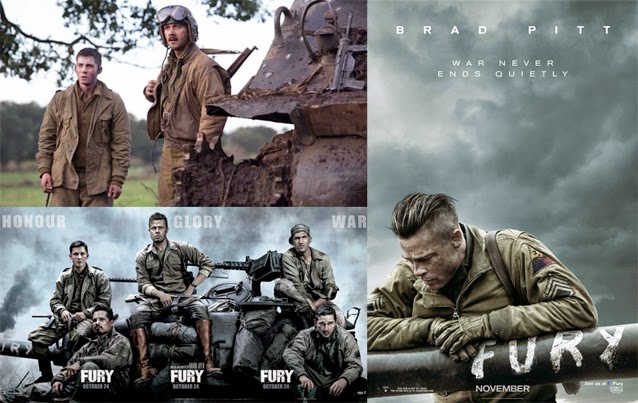 Fury is the name of a tank.

This film follows the war time exploits of that tank and it’s crew, commanded by Brad Pitt as Don Collier, during the last year of the Second World War.

As such, it hasn’t got a standard story, or traditional plot line. It’s a very basic, drive your tank here, point it over there and shoot but, of course, that’s a very simple minded appreciation of what we have here which is a very tight and gripping war movie, trying very hard to be as authentic as it can be to what it was like to be in one of those tanks at that point in time. War didn’t have stories as we know them but it also had thousands of stories every day, depending on your view of the term. So in some ways, I guess this does have a story of sorts... the story which is the arc of the personal histories of the men who are driving the tank.

Now with a bunch of actors like Brad Pitt, Shia LaBeouf, Logan Lerman, Michael Peña and Jon Bernthal... who are all beyond excellent in this and stuck in close proximity in the claustrophobia inducing, cramped conditions of one of these things... you’d expect this to be a character piece and, certainly, you do get a measure of the men these actors are bringing to life in front of you. However, it’s interesting in that it’s not a character piece in terms of the history of any of the men. There are occasional little hints or flourishes which allow you to make shrewd guesses about the back story of some of the main characters but, ultimately, you are in the same position as someone who would be taking Brad Pitt’s advice to his new gunner, Logan Lerman, for the first time... don’t get too close to anyone. So this film is very much a study of the way that men who are none too palatable, in some cases, bond through war and have become a crack fighting team in spite of their differences.

And I have to say the film works really well in this.

For instance, when you are first introduced, pre-credits, to the majority of the crew, they don’t exactly seem to be a well oiled machine in terms of their ability to gel as a team. There are some points in the film where people take a swipe at each other and generally don’t get on with their fellow men, thrust into the mix inside a ticking time bomb of metal carnage... but this film, after deliberately setting up that inconsistency with the way the characters act and react to each other, shows that beneath the surface of these men, there is an overreaching spirit to complete their mission for their country or go down fighting. It’s in this way that the true character of the people involved comes out. The hooligan of the group, who often starts trouble, has a telling scene in which he tells the new recruit that he believes him to be a good man. Everyone has a heart, it seems. They just don’t let it show.

Pitt’s commander is very much a man who is holding together a unit while trying to hold himself together at the same time. There are more than hints that he’s already suffering from some kind of combat fatigue but, unlike a similar condition displayed by Tom Hanks in Saving Private Ryan, he keeps it in check with a minimum of fuss and Pitt’s performance here is such that it becomes very easy to see the sympathetic and extremely empathic man underneath the fierce veneer... and it is a very fierce and challenging veneer as he forces his new recruit, quite physically, into shooting a captured nazi, for example.

Logan Lerman plays Norman Ellison, the new boy, and he also has his own journey/story... as he goes from pacificistic Christian to out and out nazi killer over the course of the film... a journey that Brad Pitt facilitates due to the necessity of having to survive in this kind of conflict. There’s a certain irony to Norman’s attitude by the end of the film when he comes face to face with a nazi searching for survivors but, since I don’t want to spoil the ending of the movie for you, I’ll hold off pointing it out in this review and just urge you to go see it and think about it for yourself.

I’ve not seen any other movies by writer/director David Ayer but he does a fine job here and makes some very interesting, almost puzzling choices in the way he shoots certain kinds of scenes. Specifically the battle scenes.

He goes with hand held camera reacting to things, as you might expect for a modern film about conflict, but he tempers that with absolute static shots of whats going on, in terms of camera movement, every two or three shots in the combat sections. It’s actually curious but quite grounding... like a series of mini establishing shots cut into the battle. The editing is quite pacey but it’s not too fast like a fair number of modern action movies and I think it might be due to the static nature of some of those shots which helps the audience not lose sight of the geography of the action a lot of the time. You really feel those fraught and suspenseful battle scenes too so it’s not something which lessens the emotional pull and drain you get when this kind of stuff is going on.

The other really phenomenal thing about this movie is the score by Steven Price. It’s interesting because it’s quite unlike a traditional war score, bringing a very contemporary style of beats and electronica into the mix. At the same time, possibly due to the mixing but probably due to the spotting, because it does have a chance to shine within the mix, it feels very appropriately scored throughout and you never really question the decisions made with the make up of the music... so it’s another good one from him. I have to say, the CD has gone straight to the top of my Christmas list this year.

Not much else to say on this one. The ending has divided some people and I think the irony of it at a certain point is a bit much to swallow, but overall I think it caps things off quite nicely and I’m not going to be too critical of that because, one of the things I know about trying to get by in a chaotic world, is you don’t always make decisions that make sense. It works well enough and, overall, Fury is a movie which pulls no punches and reminds you of the heroes who died for their countries during conflicts ike these. A good, solid war movie if that’s the kind of thing that floats your DUKW or tracks your tank. Take a look at this one on a big screen if you get a chance.