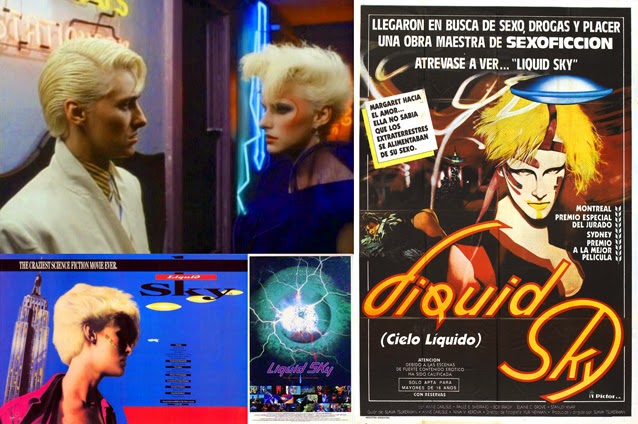 Liquid Sky is a movie I’ve been wanting to see for over three decades. I remember being desperate to see it when I was a teenager, still riding the Star Wars bandwagon of cinema releases at the tricky age of 14. There was very little said about it on the radio, where I think I first heard about it, but it sounded like it was combining two of my favourite things, science fiction and sex (hey, nothing ever changes much) and I couldn’t wait to see it. So I puttered about my daily business in gleeful anticipation of it turning up one week at my local ABC Cinema sometime soon.

And it never turned up and became one of the few movies that got away... that is, until now.

Of course, now I’ve seen it, I can see exacly why it didn’t make an appearance at my local. Even though the ABC chain was quite happy playing 1970s softcore sex movies and horror film double bills as regular features some weeks, Liquid Sky would have tested the patience of a lot of their clientele at the time, I suspect.

My understanding is that my old friend, @cultofthecinema, had a similar experience to me so, when I found out that the NFT would be playing it as part of their sci-fi season, we were both delighted and tickets were promptly booked. He even brought his wife to the screening and, as I leant over to him half way through this performance, I whispered in his ear... “You’re wife’s never going to want to come and see another movie with us ever again, dude.”

Liquid Sky is not, I’m afraid, the blend of surrealism and European “arthouse” (for want of a less insulting term) movie making I had imagined it to be. It concentrates more on the “alternative” night life of New York city in the early 1980s and pretty much captures the people and mood of that specific time, it seems to me. The lead actress, Anne Carlisle, who was an alternative theatre performer, as are both of the parts she plays here (she stars as both a male and female character) is apparently channeling her real life experiences... like most of the cast are, from what I gather.

The science fiction element comprises of a tiny flying saucer which lands on her apartment after a fantastic opening credits sequence with some, it has to be said, quite striking electronic music and a kind of “Clockwork Orange on acid” zoom pull back cut into the mix. The flying saucer, or the permanently unseen inhabitant of said saucer, then proceeds to extract certain nourishing elements in the human brain as people have sex... when they reach orgasm, the brain secretes a chemical akin to an opiate (hence the name of the film... Liquid Sky is street slang for heroin... at least it was at the time this was made) and through the wonders of some quite tacky animation and posterisation effects on the film stock, the aliens extract the bits they need and the humans in question are vapourised as a result of the extraction.

It sounds better than it is though and that’s the whole story right there. It’s just a frame for the writer and director to capture what often looks like a mostly improvised series of lines although, saying that, I’m sure this thing had a script... but I suspect some of the actors involved were probably offering alternate readings and additions each take (I may be wrong here so if anyone wants to chime in, please leave a comment below). What it does do... and does well, I suspect... is show a certain section of the avant garde at the time and, to be honest, it’s not a pretty sight. It’s all about finding where the next high is coming from, trying to rip people off for their drugs and inhabiting a sexual culture that seems to rely on a lack of mutual consent as often as not. These people seem to get off insulting each other and squabbling over petty issues repeatedly and it usually ends up in a struggle, a fight or a rape... usually, in that last instance, of the Margaret character (the female role played by Anne Carlisle), who the alien is hanging around because sex, consensual or otherwise, and drugs seem to follow her around wherever she goes. It’s a bit like watching kids constantly arguing with each other... not that fun.

There are some pretty uncomfortable scenes involving Margaret and the taunting  insults fly thick and fast around the lethal apartment she lives in with her, frankly, antagonistic girlfriend. At one point you wonder why she doesn’t just tell her colleagues to go f*** themselves and, within a short space of time, she is indeed, f***ing herself, as the male character she plays, Jimmy, ends up passively/aggressively forcing himself on Margaret.

In many ways, Margaret can be seen as a victim of the lifestyle she leads although, it has to be said, not as much as some of the more aggressive losers who populate this film and she does start to take back the power when she realises that the people she’s having sex with are being vapourised as they cum. In a way, she’s a prototype for the character that Jess Weixler plays in Teeth, although she doesn’t take nearly as much pushing to become and avenging angel and she has the advantage that, once the deed is done, there are no bodies to be taken care of.

Except in one case...

One of the things about this movie is that the internal logic of the story seems a little screwed up... at least at first. The first person to die from what I can only describe as “alien orgasm extraction” actually does leave a corpse behind and much is made of this as Margaret and her girlfriend try to get rid of it... after her girlfriend tries to have sex with the corpse. After this first one though, people are getting vapourised left, right and centre... so it seems a bit of a strange one in terms of the consistency of the writing, that’s for sure.

The film is not without its charm but mostly that comes in the way of some of the less intentional comedy and the line readings. There’s a kind of charmingly ineffectual Van Helsing style UFO hunter who arrives to give advice and his character was giving me a lot of laughs... although I’m not 100% sure whether I was supposed to be laughing at that point. When the film had finished I said to my friend... “I bet Andy Warhol would have loved that.” Well, I didn’t know it then but, when I looked up this film in the IMDB afterwards, I found that it’s considered by some to be an update of Paul Morrisey’s film, Andy Warhol presents... Trash. So that kinda figures actually because I definitely picked up on that whole "factory" vibe as I was watching it.

Plus, that “in your face” musical score from the start of the movie really gets to you as you get through the running time. It seems almost inappropriately overscored in most places and that score is definitely, at the very least, striking in its tone... especially when pitched against the images. I’d love to pick up a copy of that on CD but I think it’s pretty much extinct in any form other than vinyl, at time of writing this, so I might have to put that one on hold.

Now if I was reading this review back, I’d say that this sounds like a fun film but, honestly, as far as I’m concerned... it’s not. A lot of people really like this one and it’s got a lot of positive reviews so, I feel a bit like an outsider for saying this but, for me, Liquid Sky is purely a social document, of interest in capturing the zeitgeist of a certain part of the New York scene around that time. As an entertainment it mostly just irritated me, I’m afraid. It wasn’t that the movie is in any way challenging... it really isn’t. Maybe it’s the way the whole thing looks like it’s being held together with spit and sticky tape in regards to editing although, I have to say, the editing is at least competent in terms of allowing a clear decoding of the shots. The footage and fashions have a kind of Blade Runner feel to them, which makes sense as they were being shot around the same time, but you get the impression that Scott’s movie took the fashion and accented the bits he needed to make it work as a unifying feature of his movie whereas, in this one, you kinda get the feeling everyone just maybe turned up in their own clothes.

At the end of play, I have to say that it’s not a movie I would recommend to many, if any, of my friends and it’s not something I have a sudden blinding urge to watch again. It was nice scratching the itch and ticking the box from my teenage years but, despite its continued popular following, Liquid Sky just doesn’t work very well for me, I’m afraid. Which is a great shame because, I have to say, I was really looking forward to finally seeing it.
Posted by NUTS4R2 at 19:35