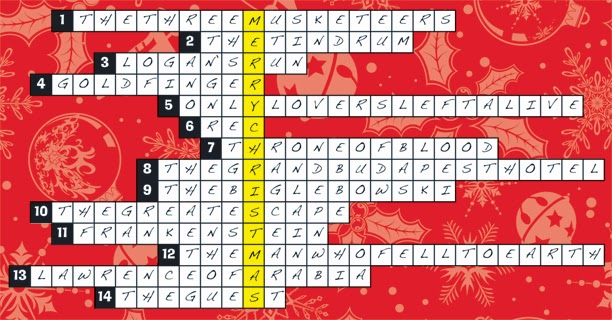 Thanks to everyone who took part in this years movie quiz and I'm glad I made it a cryptic one because, from the sounds of it, a fair few of you had good fun puzzling over some of the answers... so that made it all worth doing.

This year we have two big winners who got all the answers right and they are...

Alex Kittle (the being formerly known as Film Forager) is an amazing artist and one of my all time favourite bloggers. She writes about art and movies and also does some great, often film based, illustrations and designs. You can follow her on Twitter here and check out her blog here.

MIles Donovan is an artist/designer/blogger who does amazing things with robots... among other things. You can follow him on twitter here and see some of his wonderful creations at his alter ego The Daily Robot here.

You should definitely check out their stuff when you get a minute.

One further clarification for Katrin Jenny who got a heck of a lot more right than she initially thought she would... no, the answer to the last question was not "Smart Ass"... but I appreciate the sentiment, I think. And the fact that you carried on with a recently dislocated arm due to ski-related mayhem. Get well soon.

The Answers and how you arrive at them...

Please remember this is a bit of fun so some of the spelling needs to be changed based on the phonetics of the situation. ;-)

1.  One up on stereoscopic sound for your old gun. 18 letters.
Well, to fully appreciate stereo sound you need two ears. One up on that would, presumably, be three ears. An old gun is a musket so... Three Ears and a Musket? The answer must be The Three Musketeers.

2.  You keep banging on about a third of a dog! 10 letters.
Rin Tin Tin was a famous movie star dog. A third of his name could be Tin. Something you can bang on would be a drum so the answer I was looking for was The Tin Drum.

3.  Wolverine beats a hasty retreat. 9 letters.
In most of the comics and certainly the films, Wolverine's real name is Logan. If you're beating a hasty retreat then you're probably running so the answer to this one would be... Logan's Run.

6.  It’s a bit of a wreck. 3 letters.
Yes it is. The three letters sandwiched between the W and K for instance, give you the answer of the Spanish horror movie REC.

7.  Plasma made fit for a king. 13 letters.
Plasma can be a substitute for Blood. Something made fit for a king could be a piece of furniture, for instance, like maybe his Throne. So the answer is Kurosawa's famous Macbeth adaptation Throne Of Blood.

8.  One thousand quid for rooms to rent for that annoying, enlightened soul. 21 letters.
One thousand pounds is also known as "a grand". An enlightened soul could be Buddha but, if he's annoying, then he could be a bit of a Pest. If he's renting a room then it could well be in a hotel. Hence we have The Grand Budapest Hotel.

12. Tripping Homo Sapien reaches Terra Firma. 20 letters.
A Homo Sapien is a man. If he tripped he fell. Terra Firma refers to the Earth. Therefore the title I was looking for was The Man Who Fell To Earth.

And that's it. The cryptic form of quiz proved pretty popular so I'll probably use the same kind of format next year... but please do come back and read some of my other posts and reviews in the meantime.

All the best to all my readers and I hope you all had fun.