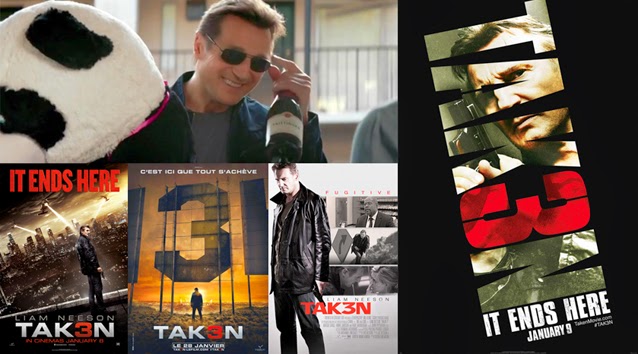 Liam Neeson explodes back on the screen as Bryan Mills...

Don’t get me wrong. I love Liam Neeson, I think he’s a great actor and, funnily enough, I also loved the first Taken movie... otherwise I wouldn’t have subjected myself to seeing the third installment in the franchise. I love producer Luc Besson too, of course, and as for Olivier Megaton... well, I liked Transporter 3 and Columbiana (reviewed here).

That being said, while not a complete disaster, Taken 2 (reviewed here) had some big shoes to fill and it was not the greatest sequel, by any stretch. I think the problem with the franchise, in terms of my expectations of it, is that it opened so strongly. Asides from his more swashbuckling role in Star Wars Episode I: The Phantom Menace (reviewed here), Taken was pretty much the first time we’d seen Liam neeson play a “hard as nails” action hero and he did so credibly in a film which made good on the promise of its trailer. Neeson is always believable at the very least, of course, but the script in the first one was very strong for the kind of movie it was and, alas, neither Taken 2 or Taken 3 live up to it, to be fair.

This one starts off by setting up the majority of the bad guys by showing them doing some nasty stuff at the start of the film... which is pretty standard and almost a basic requirement of a movie like this. However, it has to be said that the drastic things they do at this point really don’t help the credibility of the rest of the storyline. The absolute seeming lack of interest by the police in terms of the impact of this opening on the rest of the story (aka, the police would have been keeping a closer eye on someone who they are not all that worried about in this movie because it would spoil the so called “surprise twist” for the audience) really compromises the logic and any chance of realism for the progression later on in the film.

Once this sequence is done we are onto an opening credits section of “the urban landscape from above, at night” but, before you reach for the panic button, I’d have to say that the opening titles are really well handled and the cityscapes on view are treated in a much more interesting way - by using fast dissolves and fast zooms to highlight certain areas and accentuate the links between various shots in the urban sprawl. This, coupled with typography which doesn’t stay in any one place for too long and leads your eye on to different parts of the screen, works really well and I was quite impressed with the overall treatment of what could have been another big opening movie yawn.

The downside to that is, of course, the rest of the movie is never really as good as the title sequence. Everybody, at least in terms of the actual actors performing their roles, is all very good - heroes, villains and supporting characters alike. There just doesn’t seem to be much happening with the story line and, worse, some of the bits in the movie don’t even make any sense other than it gives the writers something to hang another dumb and, in some cases, confusingly edited, action sequence on to. Why, for instance, does Bryan go to all of that trouble and place himself in an extreme danger situation which might be impossible for him to get out of, just so he can go say “Hi” to his kid without actually telling her anything more or giving her anything useful to do. It makes no sense.

In addition to Liam Neeson, Maggie Grace and the “totally wasted in minor roles these days but truly cool actress” who is Famke Janssen, we have Forest Whitaker who is basically there to serve the same function as he did in the Arnold Schwarzenegger movie The Last Stand (reviewed here) and, like in that movie, he does a really excellent job in this picture... even going so far as to give his character a knight from a game of chess and arming himself with the elastic band from his “Bryan Mills” file and adding little gestures involving these props. It just seems though, unless there’s a much longer cut of this movie struggling to get out from somewhere, that these are distractions to stop the actor from getting bored because he seems to not have all that much function in the story in terms of his character, truth be told. He senses the dangerous and righteousness of Neeson’s personality but, for the whole movie, he still remains one step behind. It would have been more interesting if he at least contributed more to the plot and maybe teamed up and helped save Liam Neeson and the token person who gets tak3n towards the end to justify the title... but nothing like that actually happens and his character, while beautifully played, seems to be nothing more than superfluous throughout the whole movie, I’m afraid.

I know this is a fairly short review from me on this one but, alas, I really don’t have too much more to say about this movie. The original Taken was a remarkable debut in the series but, so far, the sequels have been just okay... certainly nothing capturing the special spirit of the first movie in the series. Because that first one was truly great I was hoping that the third one would be a heck of a lot better than the lacklustre second movie but, it seems, I was sadly mistak3n.
Posted by NUTS4R2 at 19:15