The Theory of Everything 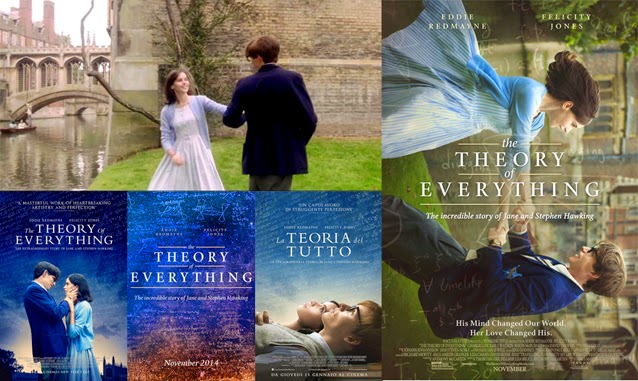 The Theory of Everything
2014  UK
Directed by James Marsh
UK cinema release print.

Almost every year these days, on my birthday, I take my parents out to see a movie at our local cinema. It’s rare they go to the cinema and probably only go with me between 2 and 4 times a year. Usually, to be honest, it’s to a film that I know one of them would like, rather than something I would be happiest seeing myself and, this year, I decided on the new biopic of Stephen Hawking, The Theory Of Everything, because I knew my father would probably really like this one (and I can always buy my mum Paddington on Blu Ray for Mother’s Day, after all).

Now, I’m really not a religious person and I don’t understand the willingness of anybody to believe or support any of the organised religions of the world... which seem to be crafted by the hand of man as a tool for control at the best of times. However, just because I have that view, it doesn’t mean I rule out the existence of God, or a God-like being or, possibly, a God-like energy in the universe. I like to keep an open mind about such things. Many people seem to think that Hawking’s scientific theories preclude God or a God-like entity in the mix and that seems to be the same tack that this film takes. One thing I will say on this subject, however, is this... Hawking’s has got motor neuron disease. When it was first properly diagnosed in the early to mid-sixties (going by the film here) he was given just two years to live. It’s now over fifty years since then and he is still with us. If ever someone wanted to try and show some evidence that there is a deity watching out for certain people on Earth or the possibility of a grand scheme of things then the survival of Stephen Hawking, the greatest scientific mind of our generation, would definitely be considered by most people... well... a bit of a miracle.

The film is based on the memoirs of Hawking as told by his once and longtime wife, Jane Hawking, brilliantly portrayed by Felicity Jones. Hawking himself is a tour-de-force of a performance by Eddie Redmayne, who I first saw when he was playing Colin Clark in My Week With Marilyn (reviewed here). He was pretty good in the former film but he really does turn in a gobsmacking performance here. If he was just portraying Hawking in one specific phase of his battle with motor neuron disease then it would be no less brilliant but certainly understandable. However, with the timing of the film spanning from around 1962 to the present day, with Hawking seen in various stages of the disease... when you take into account that these thing are not shot in chronological order... well, this performance must get some kind of recognition when it comes to award season, I reckon.

Felicity Jones has an easier time of it, I would guess, but her performance here is no less subtle...

I once had a really good friend. I’ve somehow managed to fall out with her now but, in fact, the lady I’m thinking of was almost certainly the best friend I’ll ever have and I can’t imagine that ever not being true, regardless of the fact that I don’t see her any more. When we first started talking, years ago, in a pub rendezvous, I became aware that she was looking after someone very sick and, my reaction to that news was honest and it’s probably something that someone in the position of caring for someone above and beyond the call of duty is used to, coming from that kind of situation... I immediately started trying to think of ways in which the person she was caring for could be helped and try to understand what the sick person was going through. However, it was made clear to me, as that particular conversation wore on, that the person who is actually caring for someone and having to do a lot more than a standard workload in their relationship (this on top of a full time job, no less) is a person who also needs the understanding and support of those around her/him. That role gets taken for granted a lot but it is exhausting and it’s something that the one being cared for is too wrapped up in illness to appreciate that often... and that can be a wearing, grueling, big deal of an issue sometimes. And it’s something I tend to consider more (I hope) when I meet people in a similar situation (as I have on occasion).

All of this kind of responsibility was brilliantly performed by Felicity Jones’ performance as Jane and, again, like Eddie Redmayne’s performance, it’s a slow burn where the actress has had to cope with playing the gradual build up from doing all the extra work caring for her on-screen husband to not coping with all that life is flinging at her. And again, it’s something she’s had to film out of sequence but with a degree of subtlety so that, when it’s all put together in linear fashion... and it’s a, mostly, surprisingly linear film, to be fair... then we see the gradual build up as all the elements line up against her and wear her down over time.

So... cracking performances by both the male and female leads, in this one.

It has to be said, though, that the film relies almost purely on these performances to the exclusion of much else. Sure, there are some nicely elegant set pieces and some lovely shot designs but there seems to be a lack of interest in experimentation in the way the movie is put together so that, even when a specific moment comes up at a Q & A scene near the end of the movie and the on-screen Hawking appears to do something he would never be able to do in real life, it never really takes you by surprise and I thought that where the director did try and use the language of cinema a little by running the film backwards as a metaphor, perhaps, for Hawking’s theories, it wasn’t really all that successful or as interesting as it might have been... at least not to this audience member.

However, one thing the film certainly is, is it’s a more than competent, British-made biopic with a very well written script and very strong performances so, frankly, anything else would have just been extra icing on the cake anyway. Similarly, Jóhann Jóhannsson’s score was appropriate and certainly easy on the ear but, I couldn’t help but wondering what it might have been if they had maybe employed the services of a composer like Alexandre Desplat, to be honest, but again... it was still pretty good and too much icing can be fattening at the best of times.

At the end of the day, The Theory Of Everything is a really neatly put together and powerful dramatisation of the majority of the life of one of the greatest scientific thinkers in history. It’s something that British cinema and television seem to do extraordinarily well and this entertaining and moving film is certainly no exception. Definitely worth a look if you don’t go in expecting too much from it structurally or are anticipating semiotic acrobatics. Certainly something which will hook you in from the start, though, and the performances are well worth the watch. Don’t waste any time contemplating not seeing this one... you never know what time is going to do to you next.