Doctor Who - The Tenth Planet 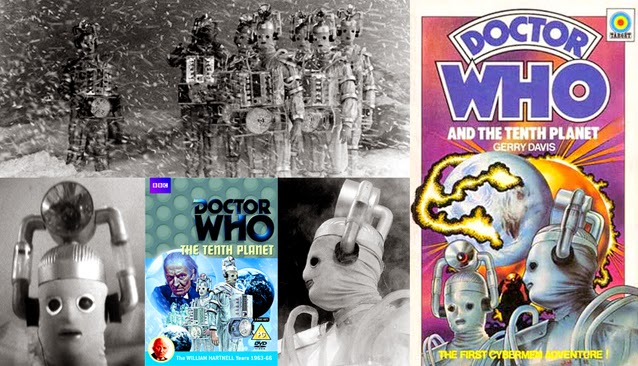 The Tenth Planet is one of those Doctor Who stories I’d not seen before (I started consciously watching the show, at the age of three, from Jon Pertwee’s first episodes in 1971) but it’s been something I’ve wanted to get around to seeing for a while. Unfortunately, the all important last episode of this story has been missing for quite some time and it’s a shame because it contains the sequence (which the BBC still have, albeit in truncated form) that is one of the reasons why this episode is still so sought after and near the top of everyone’s “missing presumed wiped” wanted list.

I’m talking, of course, about the regeneration sequence at the end of episode four. This story is the very last of Hartnell’s stories as The First Doctor in his original run, although he did briefly reprise the role for the 1973 tenth anniversary story The Three Doctors. When Hartnell was just too ill to be allowed to continue in the role, the people behind the show found a way to keep their extremely popular series running with a change of cast... thus the first regeneration scene, to allow the writers to change actor, and it was a bit of a clever idea for its time. The Doctor could be replaced any number of times and have a brand new personality to go with the new face and outfit each regeneration. So this really is a story which is a piece of television history.

The other reason I wanted to see it is because it’s the very first story in the show to feature The Doctor’s second best known enemy, the Cybermen. I’ve been seeing pictures of the original costume designs for years, which are a lot clunkier and primitive, and always thought they had a charm above and beyond the later designs of them (although the ones used for the Patrick Troughton story Tomb Of The Cybermen are also astonishingly good). Now that I’ve finally seen them in the flesh, so to speak, and heard the almost sing song voices and witnessed the unearthly, uneasy visual of them opening their mouths to speak and then their lips not moving as they talk, I have to say that it’s pretty much my favourite Cyberman design of all time.

The story in this one is pretty simplistic and features the return to our solar system of the Cybermen’s home world Mondas, the Tenth Planet of the title. Here they plan to drain the Earth of all its energy, leaving it a dead husk of a world, and take all of the humans back to Mondas, to delete their emotions and convert them into Cybermen. It’s up to the group of military people at the South Pole, in the far future year of... um... 1986... to stop them, with a little help from The Doctor and his two travelling companions at this point in time, Ben and Polly.

And when I say, a “little” help from The Doctor, I really mean it. Hartnell is hardly in this story. He’s around for the first two episodes but, for the most part, just stands on the sidelines of the action and watches things develop, offering the odd bit of advice or two. By the time the third episode has come around, Hartnell was too ill to work for a while and so a body double collapses to the floor in a weakened state and he’s out of it for the entire episode. Sadly, when Hartnell does have a little more to do, in episode four, it’s the one episode that hasn’t survived and we are left with a quite nicely animated episode, pitched as visuals against the original sound recordings. Which is unfortunate but, it’s the best we can get until a miracle unearthing of the lost episode in future years, perhaps.

I’d have to say that, The Doctor has more to do in the old Target novelisation, in which the various things he had to do which were hastily reassigned to other actors for Episode 3, are still in tact in the book. It’s not the best Doctor Who story I’ve seen, I have to say, but it was completely worth it for the chance to see, and hear, the original Cybermen and to finally watch one of the most iconic serials in the show’s, to date, 51 year old history (it will be 52 years in November 2015). If you want to get a taste of William Hartnell in the role of The First Doctor then, sad to say it, but this probably isn’t the one to watch. However, any fan of Doctor Who would probably want to see this because of its place in the history of the show and due to it being the genesis of the Cybermen. I have to say, it’s whet my appetite for seeing more of the Hartnell stories, so I will hopefully be pursuing a few more of those on this blog, over the next couple of years (along with some more, incomplete Troughton stories). The Tenth Planet is probably not one for the casual viewer but to genuine fans of the show it’s something of a “must see”.  So if you count yourself a such... maybe give it a go sometime.