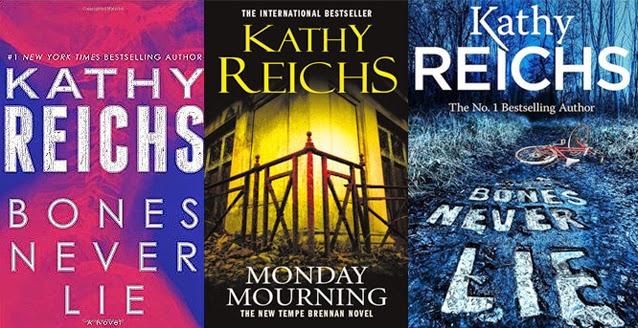 Anique Pomerlau was her name.

And she was one of the few.

One of the ones who got away and escaped both justice and the clutches of Kathy Reichs’ bone expert extraordinaire and heroine of, now, seventeen original books, Dr. Temperance Brennan. However... there are more bodies turning up with the same MO and Brennan and her regular co-stars are hot on the trail of the killer... or as least as hot as they can be with various cold case murders committed around a year apart. Is Pomerlau back?

And so the questions started pouring in on the second of my annual Christmas holiday rituals... the reading of the latest Tempe Brennan novel.

Now, you have to understand that this is not the same Temperance Brennan as she appears on the TV show Bones. That Temperance, riding the coat tails of this successful series of novels by Kathy Reichs, is based on both a younger version of the character in these books and, also, the real life Reichs herself. I am sure, as I know from reading these novels pretty much every year since I first discovered them (a few years after I started reading Patricia Cornwell’s Scarpetta series), that Reichs is a fantastic person but, it has to be said, I really couldn’t get on with the incarnation of her in Bones and, based on the few episodes I did see of the TV show, I’ve stayed away from that particular modern TV phenomenon since. It seems to me such a watered down version of both the events and regular cast of characters found in the series of books.

There’s a reference to the TV show late in the novel and, I have to say, at first glance I thought it might be a way of the writer distancing the character in the books from the one in the TV show. That is, however, unfortunately offset by the full page advert for the DVDs of the show in the back of the book so... any recognition of the art of breaking the fourth wall and the metatextual world of fiction, got blown away by it being just another form of selling the brand, as far as I’m concerned. Maybe I’m being cynical... I don’t know.

That being said, and I may have mentioned this before (I can’t remember), Reichs seems to have gone through a bit of a bad patch... at least in terms of the stories she is telling about Tempe these days. They really are quite predictable and it makes me wonder if Reichs’ involvement with the inner workings of the Bones TV show has rubbed off on her the wrong way and maybe dumbed down the story content somewhat. There’s a twist, for example, about two thirds of the way through this novel and, frankly, I saw it coming as soon as a specific character other than Pomerlau, from the earlier Temperance Brennan novel Monday Mourning, which this is a sequel to, was first mentioned in the text.

Unfortunately, and I curse my brain often for working like this, I know that as soon as I’m onto what might be the answer to the specific mystery in a given novel, a writer is going to start throwing in as many red herrings as she can and begin playing a misdirection game with the reader as soon as she or he has planted all the threads leading to the actual solution in the text. Kathy Reichs, at this point in her brilliant career, is no exception to the rule and, once a certain piece of evidence came in which put all the characters in the book onto a specific type of search, I was pretty sure something was going to come up at some point towards the end to bring that evidence in question. It didn’t hurt that I read something in December about the specifics of genre and sex, in a book called The Psychology Of The Girl With The Dragon Tattoo (review coming soon), that allowed me to keep an open mind about things. So there’s that.

The other slightly irritating thing about this novel is that my analogy of modern writers of genre characters being the 21st Century equivalent of the old pulp writers of the 1920s and 1930s is more than maintained, still, by Reichs formulaic chapter endings... every one of which ends on a mini cliff hanger of a statement designed to have you guzzling down the next chapter as soon as possible. Yeah, okay, there’s a strong case to be made that this is a very good writing trick, and it certainly worked for writers like Lester Dent (aka Kenneth Robeson) in their day, but the fact that Reichs does it pretty much every chapter but with less of a dramatic event happening at these specific places... does get a bit much after a while. For instance, the first five chapters end with the following little jabs...

“Read a name. Felt the flutter of adrenalin hitting my gut.”

“The voice blindsided my overwrought, over medicated brain.”

“Mama couldn’t be dying. Yet Luna Finch said it was so.”

“Slapping colones on the table, I bolted for the door.”

And so on, throughout every chapter of the book. The technique does its job, I guess, but since I became conscious she started doing this, a fair few books ago, it’s kind of become a bit of a cliché for me.

However, there’s a lot to recommend in the latest Tempe novel too...

Her regular cast of characters return with her and the dialogue, something Reichs always has an imaginative ear for, is first class... sometimes reaching 1930s screwball comedy levels of wit and irony. Regular readers may like to know that Tempe’s main romantic interest, Detective Andrew Ryan, is back in the novels... although he’s not the Ryan you used to know... at least not at the start of the novel. Actually, the character development with Ryan starts off fine in this book but, I have to say, it felt somewhat clumsy at the end. As though the choices Ryan makes about returning from his “drop out lifestyle”, inspired by the death of his daughter in the last novel, are somewhat quick and easy. I guess, what with the narrative being the usual first person from Temperance Brennan herself, we aren’t able to get inside Ryan’s head like we would like but, honestly, I would preffered just a little more detail and a little bit more cat and mouse with the character, I think. It seems, for a lot of the novel, that there isn’t that much work for Tempe to do in relation to mending the hardened, almost broken man that Ryan has become and it’s almost a shame that the character sub plot was overshadowed by the main mystery in this one... but maybe that part of the story isn’t finished just yet. I guess I’ll find out next December.

For all my criticisms and the fact that I don’t think this particular Reichs novel is in any way a shadow of her early work, I have to admit the book is damned entertaining and, if you can focus less on the things I’ve grumbled about here, you should find yourself with an easy read and a thrilling ride if you choose to find out the truth behind the old saying, Bones Never Lie. Fans of the character would obviously welcome the return to themes and characters from an earlier book but, similarly, it doesn’t make this one the best jumping on point if you’re unfamiliar with the previous novels. One thing is for sure though... this book is as gripping as a crazy eyed arm wrestler and if Kathy Reichs is, like she is for me, one of your favourite modern writers, then you won’t want to be missing out on this one. Who knows... it could be bringing up important stuff for future novels to come.