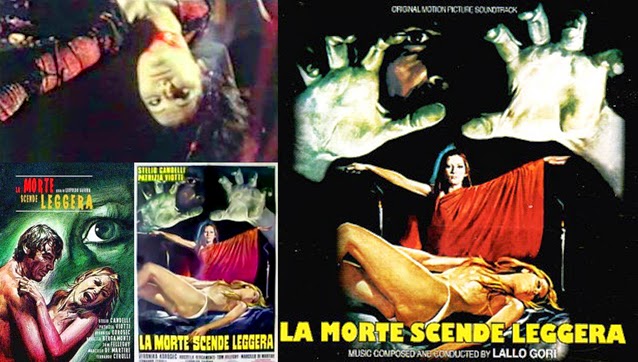 I’m told that Death Falls Lightly is quite a rare giallo to get hold of but it’s one I especially wanted to take a look at because, as regular readers of this blog might have already guessed, I absolutely love Lallo Gori’s score to this movie and I really wanted to see how the music fit the picture in this one.

The films starts with a longish, guitar dominant song which is a particular favourite of mine, accompanying a point of view camera shot of someone as they stand in the hallway of a house and look around. There’s a fair bit of moving camera in this one. We are then, via the camera eye, taken into a bedroom and there is the shape of a person under a pillow...

Cut to our unsympathetic protagonist Giorgio Darika, played by Stelio Candelli, an actor I’ve apparently seen in quite a few things such as Planet Of The Vampires, Nude For Satan and Demons... although I didn’t actually recognise him, I have to say. He leaves the house, jumps in his car and we continue with the theme of the camera eye looking through the windscreen of his car as we drive the streets with him... while the rest of that gorgeous opening song and the credits sequence play out.

He visits his ‘judge friend’ and tells him that he has found his own wife dead with her throat slashed open in his house. He has absolutely no alibi or witnesses as to where he has been apart from the fact that all his friends in high places, like the judge, know he’s been on a trip running drugs to fund their political careers. So it’s up to his high powered friends to help him lay low and find a way out for him while the police are "making their enquiries". After a brief stop to pick up his lover (played by Patrizia Viotti, and not to be confused with his wife, obviously), the district attorney drives him to a deserted hotel... although how such a big place is completely devoid of customers is beyond me... and the two are left there to wait out the manhunt until something can be done.

Now, it’s not a bad giallo at heart. The director manages to make the most of his location and it feels quite claustrophobic at times. When the two in the hotel realise that, actually, they are not totally alone there after all, things get going with a lot of wordless sequences where Darika is wandering around the hotel uncomprehending as he meets various “inhabitants” like the owner of the establishment who he sees has murdered his own wife in the exact same way that Darika’s wife was killed. After he helps the owner bury the body, things start to get a little bit more off kilter as various little incidents accumulate to gradually wear down Darika’s mental health and place a strain on his grasp of reality.

What’s really interesting, though, and something I applaud, is the fact that there are loads of little things in this that seem completely superfluous to the plot and which are never followed up on. For instance, on the way to the hotel, Darika and co come across a road accident with two men who have been thrown from their car and who lay bleeding on the street. I guess it’s maybe there to show that Darika, who has to be persuaded to not go and help, isn’t completely heartless but, if that’s the case, it certainly doesn’t work... at least not for me. He’s certainly not a hero figure that I could recognise as such. Another little throw away scene has the detectives working Darika’s case, searching around his house and not being able to get into a locked room which they decide needs to be opened. We never once come back to the detectives or the house again in the movie, as far as I can see. Now, it may be these are hangovers of a script which changed after those scenes were shot, perhaps, and I know that some people would be put off by the insertion of story elements that don’t go anywhere but, honestly, I prefer this kind of inclusion of material over the standard Hollywood cause and effect approach any day, although that can also work very well for certain kinds of films.

Now there’s a trick ending to this movie which I have to say, I did see coming. I also, it has to be said, guessed the identity of the killer in this movie from very early on in the running time but, being as it’s a giallo and they always defy logic and throw in every kind of red herring in the book, I wasn’t too upset by my easy identification of what the writers and director were trying to hide. What bothers me more is the sheer loopyness of the way everything is revealed. The killer, for example, and there’s no way I’m going to spoil it for you here and tell you who it is, could have gotten away with things scott free if they hadn’t made the mistake of blindly lashing out at someone with a razor blade for no apparent reason at the end of the movie. Not only does it defy credibility when that single swipe leaves three... yes, three... deep gashes in a victim’s throat and face... it also makes no sense whatsoever. I knew it was this person behind the original killing in the movie but why the heck give yourself away like that? It makes no sense. I dunno. The mind of a killer, eh?

At the end of the day, the music was still the best thing about this movie, although it seemed a little overscored for the imagery in a few places, I felt. Sequences best left unscored had exciting music thrown over the top of them and vice versa but, honestly, this may not have been the composer’s decision and these things happen a lot more after the score has been recorded than you might hope. It contains a lot of Jews Harp in the latter half f the score which fans might expect to be more appropriate for one of Gori’s spaghetti western scores than in a giallo but it seems to work out okay and it’s not as out of place as some of the other stuff in this film.

Death Falls Lightly is not the best giallo I’ve seen, for sure, but it does have a nice atmosphere all its own and fans of the genre who are already familiar with classic works in the form by directors such as Mario Bava, Dario Argento. Sergio Martino etc may do well to take a look at this one sometime. It may not be one of the greats but it certainly isn’t one of the worst and, despite its deeply implausible plot mechanics, there are a lot more nonsensical films than this on the market. One to watch, then, if you are a fan of the genre, rather than to use as an entry point into this kind of movie making.
Posted by NUTS4R2 at 20:13