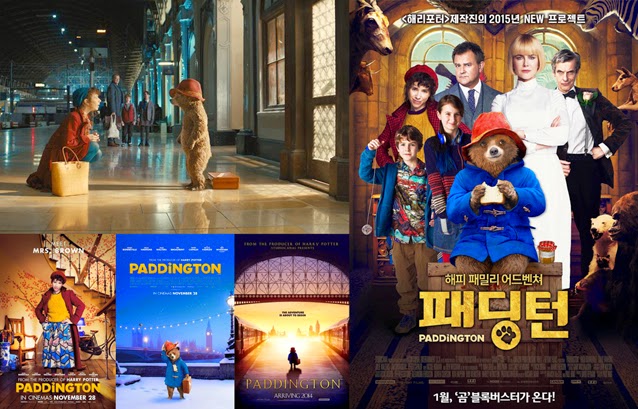 Exit Peru, By A Bear

I never got to see this one when it came out in the cinema in the UK at the tail end of last year. I kinda wanted to get to it but, as usual, the lead in of the “Christmas rush” meant a lot of movies I wanted to catch had to be sacrificed to the annual present buying marathon. However, my mother also wanted to see it and so I grabbed her a copy of the Blu Ray for Easter. Thus, there I was on Easter Sunday drinking cups of tea with my parents and watching the latest version of Michael Bond’s, almost timeless, classic... tears crawling absurdly down my face because, well... the older I get, the more the sentimentality of these things gets to me, I’m afraid.

I was not the biggest Paddington fan as a kid. I never had a version of the bear, for example. I did, however, own the first book, beautifully illustrated and, of course, like most other kids growing up in the 1970s, watched the stop-motion animated TV show from time to time. My most vivid memory of which is, of course, the episode where they reconstructed the title song’s dance routine from Singin’ In The Rain. I believe Gene Kelly was a big fan of that episode.

I didn’t, I have to admit, expect great things from this movie. I assumed that the writers and director would want to modernise things a bit... I was just hoping they wouldn’t be disrespectful of the character and the spirit of the original tales. I needn’t have worried about any of that, actually. I was quite surprised by just how well the film holds up and I’d have to say that the whole thing is absolutely... magical.

The film starts off with black & white 4:3 aspect ratio, pseudo archival newsreel footage of Tim Downie* playing the excessively British Montgomery Clyde, in true eccentric fashion, as he discovers a colony of intelligent bears in Darkest Peru and befriends the future Paddington Bear’s grandparents. Decades then whiz by and an “incident” in Darkest Peru means that Paddington has to journey to London and throw himself on the kindness of Londoners with the old “Please look after this bear, thank you” tag hanging around his neck, while his Aunt Lucy goes to live in the home for retired bears. When he is taken in, temporarily, by the Brown family, the film opens up showing all the expected, yet nicely done, incidents about being a fish... um... bear out of water, while bringing in a mystery plot as Paddington and the Browns try to locate Tim Downie’s character in the present day. And that’s really as much as I’m going to tell you about the story line, such as it is... I really don’t want to spoil this one for you.

Now, it would be true to say that the film isn’t totally original in the way it’s put together. Both the techniques used and the references made are definitely pointing to Paddington being a distinctly postmodern bear in this instance, to be sure. But, the thing is, it’s all done so well and it’s beautifully crafted and edited together, that the various stock in trade tricks, and I can assure you it steals from the best, end up giving the film a unique identity of its own in terms of any borrowed components becoming just well handled instruments in a very sophisticated tool box.

Lovely stuff like the photos on a wall taking on a life of their own, very much like the photos in Jean-Pierre Jeunet’s Amélie, are in here, for example. There’s even, towards the end of the movie, a very much re-used but charming visual reference to the Indiana Jones films which certainly hasn’t outstayed its welcome in terms of it appearing in this movie. There were also some nice things I hadn’t seen before like the leaves on painted tress on the walls of the Brown household being used as an expression of the emotional health of the family, for instance. Or the floors depicted in a doll’s house or the windows of the carriage in a toy train set taking you into other worlds and clueing the audience in on more information. These were all genuinely refreshing little touches and I appreciated them, as I watched the story stealthily unfold, quite a lot. The writers even decided to have Paddington entering the old movie footage, used in the opening sequence, later on in the film to have a brief, day dream visitation with the spirit of the younger versions of his grand parents... which is just one of many heart warming scenes throughout the course of the film designed to hit you hard in the tear ducts.

Added to this, of course, there are some great jokes scattered throughout the well written script, some of which will appeal perhaps more to adults. Such as the trophy heads in the main villain’s Natural History Museum lair, and what’s going on in the room behind the walls they are “mounted” on. Others of which will also ensnare the kids as much as any ‘young at heart’ adults watching... such as Paddington trying to figure out the use of the ‘facilities’ in the Brown household and using two toothbrushes to clean out his ears. This is all good stuff and should, mostly, bring a smile to the face of most people in the audience, I suspect.

But it’s not just well lit sets and a beautiful melding of Nick Urata’s wonderful score with songs performed by D Lime and Tabago Crusoe as little ‘on screen’ visual inserts that make this film the masterpiece it’s turned out to be. It also has some of the finest actors and actresses of our generation in this, including Hugh Bonneville, Sally Hawkins, Peter Capaldi, Julie Walters, Nicole Kidman, Jim Broadbent, the voice of Ben Whishaw as Paddington himself and... well the list, including some wonderful cameo appearances, goes on. It’s well performed by people who know just what they’re doing, is what I’m trying to say... so it would be hard to see how a film full of such wonderful professionals could be in a bad movie. That being said, I’ve seen it happen before but, I’m happy to say, they are supported by such a wonderful script, fantastic misé en scene (some of the colours used are gorgeous in certain scenes), surprisingly well done CGI (seriously groovy fur people!), great scoring and some inventive editing... amongst other good stuff... that this film is a marvellous success as both a children’s entertainment and a movie which can be appreciated by infants of all ages, myself included.

Not a film I was particularly expecting to come away with such a positive opinion of, to be honest, but there you are... sometimes these things happen. A truly enchanting movie experience that is a definite, solid, sure fire recommend from me. If there is a softer side to your movie going heart, you might want to take Paddington in off out of the cold and give him a place on your DVD or Blu Ray shelf. And always remember to keep a marmalade sandwich under your hat... just in case of emergencies.

*The gentleman in question tweeted me on the twitter machine yesterday and assured me that his correct mode of address is “the devilishly handsome and witty Tim Downie". Well, who am I to argue with that?