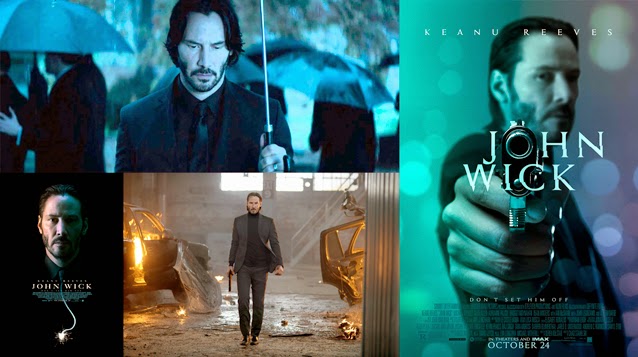 Okay. So I find it kinda strange and irritating that a relatively high profile action movie like John Wick has had such a delayed release in this country, especially when the language it’s been shot in is a derivative of the language we speak here in the UK. My cousin lives in Australia and I remember him recommending this film to me when we had a Skype conversation in early November. Why did we have to wait so long for it in this country? Especially since, as is my understanding, there were no censorship issues with it. Note to studios: If I really had wanted to see this film badly enough, I would have just legally bought the US DVD or Blu Ray edition which came out a little while ago over there and had it shipped... pretty much anyone who is a lover of film in the UK has to have at least one multi-region player of some kind laying around because there is so much trouble with censorship and availability in the UK. People less scrupulous than I would, and I’m sure many did, just download it illegally from the internet... personally I don’t do that, for a variety of reasons, but many people do. So you are really hurting your box office take by not releasing these movies more or less simultaneously.

John Wick is a pretty good, broad stroke revenge movie, fuelled very much by comic book style attitude towards the action and violence but shot with a certain amount of care and detail to the point that it is like the close kin of another movie I saw at the cinema recently, the Liam Neeson action flick Run All Night (reviewed by me here). Of course, in every other country, John Wick was the first horse to bolt out of the stable door but, obviously, I’ve had to wait until after the Neeson flick had already been playing for a while before I had an opportunity to see this one.

The similarities between both are quite marked.

Both films start off by showing a central protagonist in a very bad way and then flashback to how he got into this state for the majority of the running time. They are both films which involve an anti-hero ex-killer (Wick’s nickname is Baba Yaga in this) who has a history with the villain of the piece. Wick, by the way, is played by the highly competent actor Keanu Reeves and his ex-villainous connection is played by Michael Nyqvist, who most UK audiences will recognise best from his role as Mikael Blomkvist in the original adaptation of The Girl With The Dragon Tattoo and its subsequent sequels, collectively known as The Millennium Trilogy. Both John Wick and Run All Night have a central protagonist who is forced to go on a rampage of some kind due to the misguided exploits of the young, hot-head son of the film’s principal antagonist and, in each case, that antagonist is only going after the protagonist, very reluctantly, because he has been backed into a corner due to the consequences of those actions of his offspring.

Both films also feature very long action and chase sequences but the way both films go about trying to achieve their adrenalin fuelled, emotional goals are very different. The two have nicely composed and designed shots but, where Run All Night has a kind of modus operandi to the sequences which keeps them cut like an MTV pop generation video on acid - extremely short shots making up all the scenes - Wick uses much longer, fluid shots with a lot of moving camera to capture the more flamboyant scenes of violence. Both films have their pros and cons and are trying to be gritty but with Run All Night, the speed of the shots slightly detracts somewhat. John Wick, on the other hand, is a little more light in tone when it comes to the raw edge of the character and, as I said, much more comic book in its treatment of the choreography of the action sequences. It prefers to use moving master shots to keep you pulled in and focused.

Neither film is wrong in their approach but I find the idea of two films with similar themes being the flip side of the coin to each other, when it comes to the technique used to illustrate those themes, extremely interesting. The fight choreography in John Wick is certainly impressive and it does look like Keanu Reeves is doing a lot of his own “rough n’ tumble” in this one... quite convincingly, I might add. In terms of comparing the two films... I’d consider watching John Wick again because the action sequences seem to be a lot more entertaining, it has to be said.

The main difference to this movie is that John Wick is very much a revenge thriller and it takes a fair bit of the early screen time pulling very hard at the audience’s emotions to establish the connection between Wick and his new puppy dog, sent from his recently deceased wife to bond with Wick after her death. Everyone loves a puppy and so the inevitable scene where John is beaten up, his dog killed* (which is in the trailer, so I’m not spoiling anything here, people) and car stolen, is very calculated but, obviously, it works pretty well and you'll get quite fuelled up to see Keanu Reeves’ character leap into action and punish the bad guys. Strangely though, and this is where the art of film comes into play, the amount of time between John Wick losing his wife, gaining a puppy and then having it killed, forcing him out of his self-imposed “kill them all” retirement, can actually be only a week in terms of the events in the character’s chronology. However, the director is skilled, or at least tricksy enough, to give those elements a sense of gravitas even though they take up a pretty insignificantly small amount of time in the principal character’s life. And, of course, Keanu Reeves’ on screen performance is sturdy and assured enough to convince the audience that his personal stake in this is enough motivation for his actions throughout the rest of the film. So, as usual, good work from him.

He’s ably supported by some great actors and actresses in this too, with some good little turns from Willem Dafoe, John Leguizamo, Ian McShane, Adrianne Palicki and Bridget Moynahan (although, seriously people, 8 seconds of screen time is really not enough for this wonderful actress). He’s also well supported by some striking shots, cool lighting changes (there’s a scene where he goes from neutral whites and beiges to a “full on Bava” of greens and reds at one point), neat editing and... a nice enough score by Tyler Bates and Joel J. Richard. Although regarding this last element it seems, on first listen in the context of the movie, to be a killer baseline missing a central theme which might have given the film a little more lift in places, I felt. Great action coupled with a strong sense of a, kind of, moral heart for the character (despite killing 77 people on screen, most of whom are innocent of any crime against him other than trying to stop him from killing someone else) round out a movie which is actually quite entertaining.

Talk of good box office and a sequel is something which surprises me in the case of John Wick, given that it took so long to get the film out over here. However, it deserves a shot at a franchise, I think... although I’m not sure where they can go with the character after this since the motivation for his misadventures seems to be all used up by the time he’s done with his rampage in this one. Time will tell I guess but, in the meantime, if you like well oiled action movies with lots of loud noise and all the usual punching, shooting and chasing in them, then John Wick should probably satisfy your appetite for destruction for a while. Locked, loaded and ready for traction.

*Just a thought but, if you’re going to take a car ride with your dog and then spin the car around in some death defying, high speed spins and such like, your dog will seriously be looking half dead, at the very least, way before the villains of the piece come into play. That sequence is not very plausible.
Posted by NUTS4R2 at 19:37