Dr. Goldfoot And The Girl Bombs 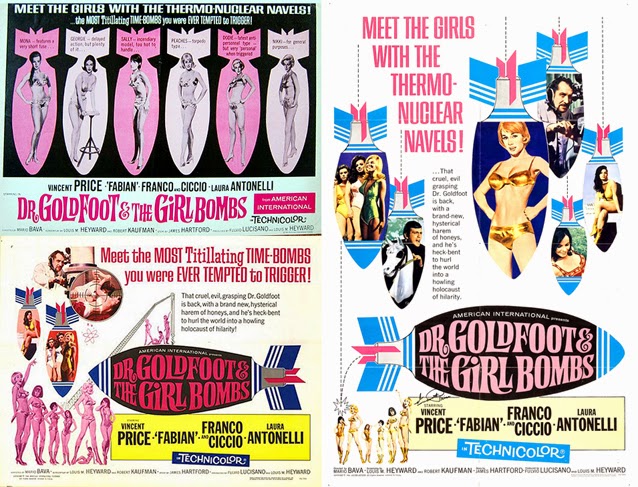 Okay, so I watched the first film in this sequence of two, Dr. Goldfoot And The Bikini Machine, very recently and reviewed it here. I didn’t think a heck of a lot of it, to be fair, even though it’s just the kind of oddity of a movie I usually relish. However, I was really looking forward to this sequel because Mario Bava is one of those amazing directors who can make even the blandest of subjects look interesting and inject it with some inspiring photography, imbibing it a vitality all his own. So I couldn’t wait to see what he did with subject matter like Dr. Goldfoot and his ridiculous schemes for world domination. Well... hmmm... to say I was underwhelmed would be a little harsh but, it has to be said, it’s a terrible movie and I was really surprised that Bava had ended up directing it

The history of the movie is somewhat strange in that it turns out that it started off life as a sequel to a film I mentioned, completely by coincidence, in my review of Dr. Goldfoot And The Bikini Machine, namely the Goldfinger spoof Due Mafiosi Contro Goldginger, which starred a very famous duo of Italian comedians called Franco & Ciccio and this second Goldfoot film, also, features them quite heavily. However, to help secure funding, the producers got the help of American International Pictures and AIP would only come on board with the backing money if the film was a sequel to their own spy spoof, the aforementioned Doctor Goldfoot. So the plan was to have two completely different cuts of the film, one which would feature more of  Franco & Ciccio (as the Italian cut apparently does... although they’re all over this cut of the movie too) and one version which is a Dr. Goldfoot film... except in the UK where it apparently had to be released as Dr. G And The Girl bombs because a real Doctor named Goldfoot threatened legal action.

The other thing I learned, and I’m sure I knew all this before because I read Tim Lucas’ excellent Mario Bava bible, All The Colours Of The Dark, many years ago... is that Bava really didn’t want to be involved with this movie in any capacity and, frankly, it shows. He was, however, under contract so he... well... he did his best with it I guess.

The film opens up with a bizarre reminder of the first movie as the credits play out with footage from the previous installment with a voice over by Vincent Price, narrating what happened and bringing the audience up to speed. Except, it’s really weird because Price as Dr. Goldfoot is the only actor/character carried over from the first film and so footage of Franco, Ciccio and “singing sensation” Fabian from this movie is also inserted in the recap, to somehow try and fool the audience into thinking their characters were in the first movie too. Um... moving swiftly along...

Franco and Ciccio don’t dominate the movie as they apparently do in the Italian version but, it has to be said, they don’t seem to jell well with a lot of the surrounding story. I can kinda see the appeal of them actually and would love to see them in other stuff but, seriously, I suspect this movie is not a good vehicle for them. Their comedy is very broad, often slapstick in places, and with maybe a dash of the anarchic humour of the Marx Brothers thrown in... served up with a generous helping of Bud Spencer and Terence Hill comedy violence at the drop of a hat. They even throw in a version of the Harpo/Groucho mirror scene from Duck Soup, only performed with Vincent Price and one of these two in this one. So they really should have fit into this movie pretty well in theory... but the reality is it’s a clunker of a film they’re in and, sad to say, that if you think Frankie Avalon’s comedy performance in Dr. Goldfoot And The Bikini Machine was particularly bad (I know I did), well, lets just say that Fabian makes Frankie Avalon look like the funniest thing you’ve ever seen.

Price himself is enjoyable enough but, honestly, the tone of his performance in this one is at odds with what he did with the character in the first. He really hams it up even more and spends most of the film actually talking to the audience. He’s kind of brilliant but, honestly, he doesn’t just break the fourth wall, he torches it and then dances on its ashes. I think he probably spends as much time mugging at the audience and filling them in on what’s going on than he does interacting with the other characters, in all honesty. There’s some funny stuff here but, when you pitch it against the plot, it seems kind of out of place and unnecessary. He still has lady robots clad in gold bikinis, who explode when kissing their victims this time around but, they seem to lack even the intelligence of the gals in the first movie and somehow seem to be a bit unsteady on their feet, it seemed to me.

There’s some terrible Bondian references again... such as one of Goldfoot’s personal assistants being called Hard-Job, after Goldfinger’s Odd Job. There’s also an homage to the periscope spy scene in From Russia With Love but... with a ridiculous comedy periscope that extends wherever he wants it to go and follows people around, stretching around corners etc, without anyone seeming to notice it. Honestly awful. Maybe he should have just stuck to using the “magically seeing anywhere he wants to” cam he seemed to have invented in the first film, perhaps?

The film has not much of an excuse for a plot and, if you thought the overlong comedy chase at the end of the first movie was dull and monotonous... well you should try sitting through this one which, pretty much, lasts the entire last third of the movie and which is equally less than entertaining, devolving into a fight with fire extinguishers on an airplane.

Ultimately, I was expecting to see a lot of Mario Bava’s perfectly framed photography and trademark bright colours but, while there certainly is some in this movie at some points, I found myself wondering if Bava was even on the set half the time because... some of it looked like it had been directed by somebody else. I feel sorry for Bava having to direct this rubbish under contract and, looking at other reviews of this movie, I think it’s generally agreed that this is the worst film he ever put his hand to... something I didn’t know when I started watching this monstrosity.

There’s not much more to say about this. Lallo Gorri scored the Italian version of this film and I would certainly like to see that version and definitely hear his score. This American version of the film is scored, once again, by Les Baxter and I have to say that I liked this score a lot more than the one he did for the first movie. It’s a lot jazzier and bolder than that one, I think, and it reminded me a lot more of what other American composers were doing in spoof spy films at the time... which is honestly not a bad way to go with it.

One last thing. There’s an uncredited actor in this called George Wang who plays one of Goldfoot’s assistants. All the way through this I recognised him but couldn’t quite put a finger on where I’d seen him before. Turns out he’s the Chinese guy who gets killed by Ursula Andress with her bullet shooting bikini at the start of The 10th Victim (reviewed here) and he’s got quite a distinctive face. I also found out he died just a couple of weeks before I saw this film... which is kinda sad since he’s only just properly appeared on my radar. Apparently he used to turn up in a lot of spaghetti westerns also... so I’ll look forward to a bit of Wang spotting now as I watch more movies.

Dr. Goldfoot And The Girls Bombs is the weaker of two very bad movies. There’s a lot of potential entertainment value, I feel, in movies with villains who have ridiculous names and even more ridiculous plots for taking over the world but, alas, and much to my surprise, neither of the Dr. Goldfoot movies live up to that promise. I am, however, happy to have seen them because that particular box tick was a long time coming. If you are a fan of Vincent Price then it’s probably worth a watch. If, though, like me, you’re partial to a bit of Mario Bava, well... you might not like what you find here.
Posted by NUTS4R2 at 19:48