Dr. Goldfoot And The Bikini Machine 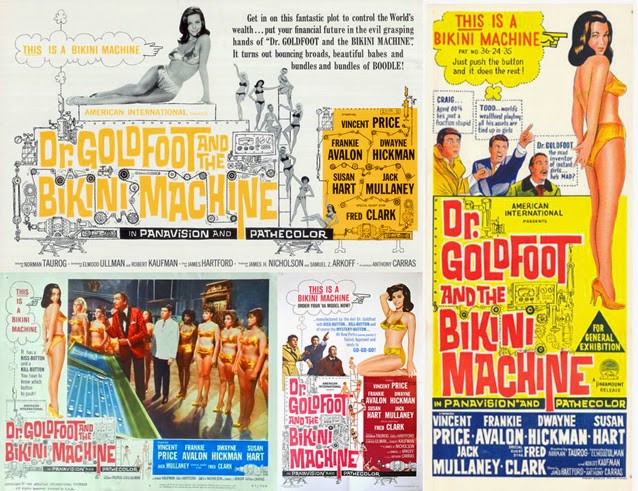 Wow. I’ve been wanting to see Dr. Goldfoot And The Bikini Machine and, more importantly because of its director, the sequel (Dr. Goldfoot And The Girl Bombs) for a while now and... well... it’s certainly a corker. Not sure if I enjoyed it in quite the same way as the director, producer and writers would have wanted me to but... well, I certainly did appreciate the movie, to some extent and it was more than once during the running time when I thought to myself... they just don’t make movies like this anymore. Although, what I was really thinking, truth be told, was... yeah, they really couldn’t get away with making movies like this anymore.

So hot on the heels of the previous year’s hit British film, Goldfinger, the American International Pictures studio goldfooted the bill for a movie which could hopefully ride the same box office take by making the title slightly reminiscent of that film (and they were certainly not the only studio doing stuff like this... anyone remember Due Mafiosi Contro Goldginger nowadays?). Of course, if you’re going to have a film trying to ride the same kind of bandwagon then you need a title song with the same power right? Well yeah... kinda. The opening credit sequence, featuring bizarre claymation, stop motion animated models of the main cast driving around in Goldfoot’s trademark aladdin-style shoes (well not really, he only wears them in one scene that I could spot) is set against a song performed by The Supremes... yeah, as in Diana Ross and The Supremes... and it’s... hmm. Well it’s fun. In the absence of availability of an album containing Les Baxter’s score you can download the opening title song, at least, for 99p on iTunes. So there’s that.

After the credits close, the song still seems to be going on. It’s almost as if the opening credits sequence animators got bored or ran out of money (On an AIP picture? Well fancy that.) or, perhaps more likely, it was put together independently of the music. Either way, since the producers obviously didn’t want to waste any bang for their buck with The Supremes, the song continues on and we’re introduced to footage of the crazy streets of San Francisco as seen through a car windscreen as it makes its topsy turvy way around fast corners and eventually into a tram tunnel. I’m pretty certain that some of this footage must have originally been shot to be incorporated into the uproariously un-hilarious final chase scene, but didn’t make the cut so the film-makers just decided to edit it all together at the end of the title sequence. Other than that, it doesn’t seem to tie up to anything else in the movie either footage wise or, more expectedly, theme wise to any events that happen. Certainly, the next title card reading San Francisco - The Day After Tomorrow and the following scenes don’t even attempt to match the shots from the windscreen section.

Okay, after this the film has a fairly strong opening, with the beautiful Susan Hart playing Number 11, as she walks down the city streets wearing a fetching hat and grey raincoat. After she is shot at for accidentally interrupting an armed bank robbery, it becomes clear to the audience that she is not what she seems. When she enters a restaurant and inserts herself into the life of secret agent Craig Gamble, played by teenage, singing heart throb Frankie Avalon, she does the old sight gag of drinking a glass of milk and having the milk run out of all the bullet holes she took a hit with in the previous scene. After this, she whizzes Frankie back to his apartment until she finds out, from the ever watching Dr. Goldfoot and his assistant Egor, that she has the wrong man and leaves in search of her real intended victim Tod Armstrong, played by Dwayne Hickman.

Of course, the reason evil super-villain and mad scientist Dr. Goldfoot, played with a certain amount of hamminess by the irrepressible Vincent Price, and his assistant Egor, played by Jack Mullaney, can see what’s going on wherever they like is through that old 1950s -1970s super-villain trick of having some kind of magical camera which must fly around undetected to any spot in the world they choose to view on their viewing screen...

Honestly people! So many movies rely on these unlikely, alchemical devices with absolutely nobody in the audience... NOBODY!... questioning how the villains of the piece always seem to have a camera which can show them the exact view of the world at large at the flick of a switch. Blimey! What the heck were we on that we could be spoon fed this kind of utterly unconvincing claptrap and, more importantly, why have we stopped doing it now. Seriously, we are now living in a period where a bad guy could literally hack into all the many security cameras around the world and see pretty much any view of anything he liked once he’d sorted out a nefarious computer hack of some sorts... but you never see any main antagonists using this time honoured technique of the “unquestioned cam view” now when we’re actually, for once, living in a point in time where this could actually be feasible. But, hey, whatever... back then, these movies were doing it all the time. Were the audiences just filled up to the eyeballs with drugs all the way through these things? Don’t answer that.

Now, Dr, Goldfoot’s plan is to get his many robot girls he made with his titular Bikini Machine, all who wear gold bikinis for some reason, to marry various billionaires around the world and get them to sign off their property over to his mechanical ladies, making him into the sole beneficiary and a very wealthy man. Presumably so wealthy that he can afford to equip his evil lair with expensive camera feeds that can see every part of the world at the flick of a switch... oh wait, That’s right. He already has that, doesn’t he? What the-?

So, anyway, I was waiting for a long while to see if Dr. Goldfoot’s plan got any bigger or more ambitious than this... rubbing my hands in glee at the prospect of a more sophisticated and ingenious plot befitting the time and attention of a super-villain but, after a while it dawned on me that nothing further would be forthcoming. Instead, I had to watch the blatantly unfunny comic antics of Frankie Avalon and Dwayne Hickman as they attempted to solve the mystery of this questionably ingenious plot. And, frankly, it felt like I was watching a Walt Disney Herbie film for adults but without the sophistication or charm that a "grown up" might likely expect for the price of a cinema ticket.

Now don’t get me wrong, there are entertainments and distractions in this movie galore. What with cameos by various other actors who, like this one, share credits on the Beach Blanket style films AIP was putting out at the time. People like Annette Funicelli, for instance, popping up in one of the dungeon sets used by AIP for the famous Roger Corman Poe films starring Vincent Price. Or other kinds of cameos such as some of the portraits of Price as Dr. Goldfoot’s “ancestors”, which are also from films like Fall Of The House Of Usher and Tomb Of Ligeia too. There are some nice little jokes from the time as well, such as Price and a talking skeleton doing the old Señor Wences “S’alright?” “S’alright.” catchphrase routine.

That being said, though, this film is not exactly a laugh a minute... no matter how much it’s trying to be in some places. Frankie Avalon’s character is Agent Double Oh and a Half. He’s not allowed to carry a gun around until he becomes a digit, not a fraction. If you find these kinds of lines funny then you’ve got a more tolerant sense of humour than I have, I think.

There is, though, a lot of inventive stuff going on including a disintegrating beam lipstick, a briefcase with an arm with a boxing glove that pops up when opened (due to the miracle of movie magic) and the entrance to Goldfoot’s lair via a slide at the bottom of a coffin in his mortuary. There’s even an appearance of the binoculars which, when you turn the dials to change the focus, have deadly spikes which pop out and into your eyes. Actually, this is the third film I know of to contain this concept. The first being the 1959 Horrors Of The Black Museum which, I sadly haven’t seen yet (don’t worry... it’s on the other side of the room as I type, in one of my “to watch” piles) and the other one being the 1996 version of the exploits of the comic book character The Phantom.

And then, just so we don’t forget who the producers snagged for their title song, they repeat it again over an end credits sequence of Dr. Goldfoot’s go-go dancing girl-bots. Which is at least entertaining in some ways.

However. for all the inventiveness and hard work on display here, the cleanly designed but not interesting enough to hold the attention style shots don't amount to a heck of a lot and it never feels like there’s anything truly remarkable or noteworthy going on in this one. I certainly wasn’t bored but, I think, my attitude throughout most of this one was of interest rather than enjoyment... although, that being said, I think it’s true to say that I’d watch it again. I would strongly suspect though, that this was definitely, with its constant slapstick routines and knowing winks to the target audience, a movie which was probably far more fun for the actors to be involved with than it is for an audience to actually have to endure. On the other hand... what do I know? They did make a sequel, after all. Talking of which, the sequel is directed by one of my favourite directors, Mario Bava... so I am really looking forward to seeing what he did with the title character. Frankly, with Bava in charge, the one thing I’m pretty sure of is that it will certainly be colourful.

When all is said and done, I can’t really recommend Dr. Goldfoot And The Bikini Machine to anyone unless they’re very much into that era of cinema and would be as interested in this kind of “only in the sixties” movie as I am. I can't quite bring myself to write it off either, though. Vincent Price once commented that the film would have been a lot better if the original song and dance numbers had been left in. Whaaaaaaat? The mind boggles but... that’s a version I’d definitely like to see. At the end of the day, I think you’d know if this kind of movie is going ot appeal to you or not and, if you decide to give it a go, then I wish you luck and hope you enjoy it just a little better than I did. And you can be sure, I’ll be reporting on just how good or bad the sequel is, at my earliest opportunity (it’s on the pile).
Posted by NUTS4R2 at 19:11