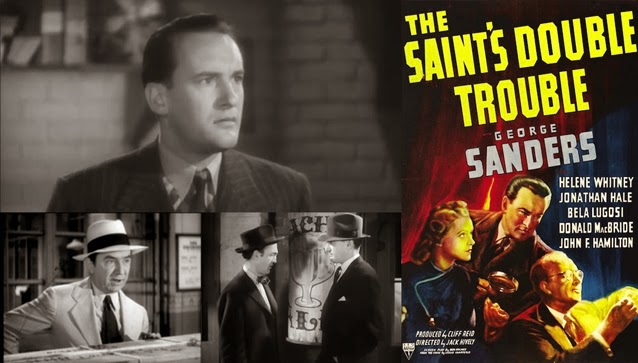 So, finally, I am continuing with my catch up on the series of The Saint movies I started rewatching and reviewing a couple of years ago, after an unscheduled break. The Saint’s Double Trouble is the fourth in the series, and the third with George Sanders in the title role. Although this one, for some strange reason not known to me, is not directly based on any of the original Leslie Charteris novels, he apparently did have a hand in developing this one for the screen... which is a shame in some ways, due to the gimmicky nature of the plot. You’ll see what I mean in a minute, if the title doesn’t already give it all away to you.

The film starts off with a coffin being taken to a postal service in Cairo, being mailed, allegedly, by Simon Templar to his old Egyptologist friend Professor Bitts in the US (played here by Thomas W. Ross). And who do you think would walk into a post office with a coffin in his arms? Yep, here we have what can only be called a “guest role” for the original “authorised” screen Dracula, Bela Lugosi. After this scene, he drops out of the film until somewhere about two thirds of the way through the picture and it’s a shame that his inability to learn the English language, and having to learn his scripts phonetically, had already reduced him to these kinds of minor roles. In this film he plays a character called “The Partner”, who is really just a human clue for Simon Templar to pick up on in his fight against the real villain of the piece.

Now, after having watched this for 15 minutes, I started getting confused. By this time, you see, I had forgotten what the title of the movie was and when Simon Templar went back to his hideout to consult with his gang of criminals... um. What? Yeah, it’s the old doubles plot. These days it’s one of the sure signs that a movie or TV show has gotten to the point where it’s “jumped the shark”, in modern parlance... and that’s one of the reasons why I was surprised Charteris was involved in this one. Even in those days it was getting to be a bit of a cliché, I suspect, and certainly a sign that the scriptwriters were running out of ideas. As it happens, though, it did manage to fool me... so it was either done incredibly subtly or... I didn’t anticipate the complete lack of realism in the way the characters were pitched.

By that last comment I mean to say that, although George Sanders is obviously playing both roles, his voice and characterisation of the “double” are exactly the same as each other. Seriously people? They’d even have the same voice? Furthermore... how the heck does the double know enough about Simon Templar’s personal life to be able to frame him for a string of murders? Anyone could fake up a Saint calling card, sure... but they wouldn’t, for instance, have a knowledge of the history between Simon Templar and Professor Bitts or, as it turns out, Professor Bitt’s daughter, played by Helene Whitney. So there’s that.

Still, it doesn’t really matter because the cast are all pretty good, although the locations being used all seem to be limited to the same three or four settings, with characters going back and forth between the specific areas laid out in the first 20 minutes of the movie... with the exception of a jail scene near the end of the film (and that’s giving away nothing in terms of plotting, by the way). Jonathan Hale is back on hand as Inspector Fernack, the Inspector Teale equivalent of The Saint’s American set adventures... and I’m happy to say he’s playing the character a little smarter than he did in the last entry. Still not as sharp as he was in the original Louis Hayward opener, The Saint In New York (reviewed here), but certainly no longer a completely helpless buffoon, at least.

The pacing is not as speedy as the blistering third film in the series (reviewed here) and, in all honesty, the dialogue is not as sharp or as singing as it was in that one either. However, the characters are all fairly charming (even the villains) and it whiles away its short running time fairly pleasantly. Sanders impressed me a little by actually being quite ruthless and tough when it came to risking the lives of the people who are playing against him... and still manages to come out of it as less of a thug and more of a righteous person who is, nevertheless, also a Robin Hood style criminal. I was also pleased that the writers were not afraid of killing off one of the more likeable, good guy characters in the film... and stuff like that is always a bonus to add a touch of weight to the drama and ensure that to Simon Templar in this one, just like a 1980s action hero... this time it’s personal!

Now, to be fair, there were gaping plot holes in this and not too much done in terms of actual detecting and problem solving as Simon Templar tries to get to the bottom of the mystery. It’s very much late 1970s Roger Moore as James Bond territory when it comes to any actual investigative techniques being used. That being said, the lack of logic and realism in terms of the plot mechanics in no way detract from this being a pretty entertaining experience and Sanders is surprisingly capable in a role which has him leaping undetected onto the running boards of cars or being tied up in a sinking row boat... this is all good stuff.

Once again, the trademark tune which Sanders whistles and which is claimed by Charteris himself as his invention (although my money is still on musical director Roy Webb, who continues duties on this entry) is heard and, certainly, it’s something that fans of later incarnations of The Saint in film and television, especially Ian Ogilvy’s turn as Templar in the TV show Return Of The Saint, will be very familiar with. So it’s good that at least some films were going for a certain amount of musical continuity... much more than the powers that be in Hollywood seem to be attempting these days, at any rate.

The ending is a short and sweet affair. I’m pretty sure these shorter movies would have been made to be the supporting feature to larger budgeted productions in most cases, but it certainly ensures that the film doesn’t outstay it’s welcome and I have to say, despite my objections to Sanders in the role in comparison to Louis Hayward, who I think played the character perfectly to the version in the books, I am still having a blast with this series of films and am enjoying these just as much as I did in my early teens, in the 1980s. So you can be sure there’ll be another Saint review on here soon and I need to get my skates on in that respect so I can start catching up to The Falcon films again. Watch this space.