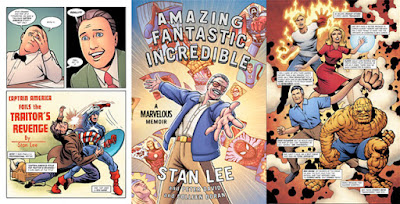 Well this was a nice surprise present for Christmas... mainly because it wasn’t even a blip on my radar. I didn’t know it existed but I would have jumped on it myself, straight away, if I’d have known about it.  Subtitled ‘A Marvelous Memoir’, Amazing Fantastic Incredible tells the story of one of the giants of modern culture, the man behind so many of the fantastic characters that people have loved since their inception in the early 1960s... Stan Lee. And what’s so wonderful about this autobiography is that it’s done, as it really should always have destined to be, I think... in comic book form. A hardback graphic novel, if you want to get technical about it, although I would have loved it if this had been serialised monthly with cheaper looking covers.

Wait, did I say autobiography? Well it’s co-written, by the looks of it, by the famous Peter David and illustrated quite wonderfully by Colleen Doran. So the question really arises as to what this book actually is because... well it’s kind of shimmering incandescently in a state between autobiography and biography... I think. For the sake of my own sanity and as something to refer to it as for the purpose of this review... I’m going to remind myself that a lot of autobiographies were actually ghostwritten by or with other people and don’t technically count as an autobiographies at all. At least this book is giving all the credit where it’s due and, since Stan so obviously has a strong stamp on what his life story contains and how it plays out here... yeah, I’m going to go with autobiography. ‘nuff said.

So I have to start off here by saying that it’s a wonderful book. There are some things I would have liked to have seen a little more of and I’ll get to those in a minute but one of the main plus points here is that it’s a vastly entertaining read and, luckily, it’s really well written. Stan Lee’s personality and jokey trademark sense of aggrandizement shine through the pages right from the outset as it tells the tale of young Stan Leiber and his home life, growing up poor, and how he joined the company which, decades later, would become Marvel Comics. Also, how he took some time away in the middle of his job there to serve, in a capacity he probably didn’t expect, in the Second World War and of the various challenges of creating and editing some of the characters he’s come up with over the years.

And it’s really warm, fuzzy and lovely... some of it actually brought a tear to my eye... oh, lay off, I’m getting older and the tear ducts open up at the drop of a hat, these days, okay? Also, though, he did manage to surprise me a few times.

The structure is not completely linear, instead he opts to do what many good tale tellers do by highlighting things which lead in to one another and go together which could be many years apart. Obviously this helps to focus on the points being made... rather than completely doggedly following a straight route through the timeline. Lee also accentuates this necessity himself in the context of that structure and it gets him to places where he’s eventually talking to his younger self about his future. It’s pretty good in the way it does this...

... but that’s not what I meant by it managing to surprise me.

What I meant is that there are a few times in here where Stan The Man’s humour got the better of me by setting up a ‘story beat’ to follow a pattern of ‘monologuing’ he might have been using earlier in the strip and then, as you turn the page, pulling the rug out from under you... making you smile and also keeping you interested because you know you can’t always predict when his humour is going to kick in. Like the time he tells of his quick divorce and marriage (into one office for his future wife’s divorce and then into the next office to immediately get married) which had a nice little set up in the style of writing that when you turn the page... oh heck. I’m really not going to spoil it for you here.

Now this book is probably going to come under fire from some quarters, I’m guessing. I was expecting Stan to gloss over certain things and, I suppose, to an extent he does. He does, however give full page (and sometimes more) shout-outs to some of his co-creators over the years, the most famous (and possibly most troublesome in terms of whose side of the story you believe) being Steve Ditko and Jack ‘King’ Kirby. Now, as it happens, I don’t think Lee is trying to make light of any of the serious issues which became problems at certain stages in the history of the company... such as when Steve Ditko parts ways by becoming a ghostly, vanishing figure from his desk. The story about the big argument surrounding the identity of The Green Goblin is a well known one and I’ve certainly heard Stan tell it himself in various interviews... so I don’t think he’s particularly trying to hide anything here... he just doesn’t mention it again because it’s such a well known one, I suspect.

We’ll probably never get to hear about the full stories behind some of these problem issues where people became kind of casualties but one throwaway comment he makes about artists retaining their work and why he wasn’t able to do that did remind me of one thing... Stan Lee is not Marvel Comics. Sure, he is synonymous with them and he’s their mascot but... he is not always guilty for some of the mistakes made in the past. When you become a figurehead, though, sometimes you find yourself caught in the crossfire whether you like it or not. I’ve got no idea myself so I’m just going to shut up about these issues now... other than to say it certainly felt like Stan has done a good job here in giving people their due and there must have been some moments in this memoir (or autobiography as I like to call it), not just dealing with the day in and day out of Marvel, that must have been very painful for him to write and include. However, if you’re going to do a project like this, I think you have to realise there’s stuff you can’t leave out and, thankfully for us, Stan certainly seems to realise this too.

The artwork by Colleen Doran is amazing and when Stan talks about some of the comic books successes, we are presented with reproductions of the covers in question with Stan’s monologue continuing the story in little strategically placed boxes over them. It’s a nice touch, as are the pages which give you a fly on the wall perspective of the recording of the first Merry Marvel Marching Society record. Its great stuff actually and although I never had much of this kind of stuff at the time, it took me straight back to being a kid in the 1970s again because... well, Marvel were never shy on their self promotion were they? We all knew about this fan club stuff, even over here in the UK.

One thing I really would have liked to have seen, since Stan mentions his rivals DC a fair few times, is the inclusion of what was, when I was a kid, one of the most stupendous publications around. The first teaming up of Marvel and DC heroes in the Giant Sized Treasury Edition of Spider-Man VS Superman is not mentioned here... and it’s a shame because I used to love laying that big tome out on the floor as a kid and pouring over the words and pictures as Lois Lane and Mary Jane Watson got themselves into trouble.

The other thing I would have liked more of is actually dates put to incidents. You kind of have to guess a lot about when things were happening and reference your own knowledge of when certain incidents might have slotted into history... so there’s a possibility some readers may have trouble keeping up in certain areas, I think. Especially when, as I said, the narrative structure tends to hop around a bit in terms of the time frame. It doesn’t make the narrative any less compelling, though, so it’s not something that should stop anyone from picking it up.

These minor quibbles aside, I have to say that Amazing Fantastic Incredible is one of the more entertaining books I’ve read in a while and is... exactly what the title says it is. It's also a lovely homage.. or self homage... to one of comic book fandom’s greatly loved figureheads which even takes us right up to date with his cameo appearance in Avengers: Age Of Ultron earlier in the year. A nice thing to own and done in a medium which really captures the spirit of the man... or at the very least the spirit of his public persona. Greatly enjoyed and recommended by this reader, at any rate. What more is there to say?