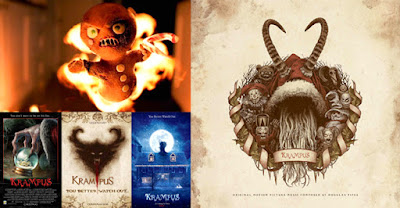 Wow. You know, I was really not expecting too much of a good time from Krampus because I saw the trailer to this one a couple of times and, well, it’s a terrible trailer. That being said, there was no way I would have been in anything remotely like a sound mind if I was going to pass up on seeing a Christmas set horror movie about a demonic looking Christmas monster unleashing hell in the neighbourhood.

So I went along to see it anyway and... guess what? Best Christmas horror movie since Gremlins. Seriously a good time and that really wasn’t an easy job to pull off because a few of the ingredients of the movie were pretty much working against it. Maybe it’s because I went to see it on what my Swiss friend informs me was St. Nicolaus’ Day (St. Nicholas Day) in various countries... a good omen, perhaps.

In Germanic speaking countries (the grandmother figure in this film is German), Krampus is a horned creature terrorising people at Christmas time by punishing the children who have misbehaved over the year. In this movie rendering, one of the children stops believing in the spirit of Christmas and accidentally summons Krampus, thus condemning his whole town to the prospect of Christmas themed death throughout the course of the running time. And it’s an amazingly well put together film, too, which mostly manages to press all the right buttons and surprise the audience from scene to scene, even though the main premise and follow through is fairly simplistic in nature.

Starting off with an opening credits sequence montage utilising an ironic setting of a famous Christmas song over the depiction of human greed, lust and misery in a large, general store... brought on by the seasonal rush of people trying to buy all their stuff in time... it starts off as it will continue and actually manages to nail that kind of cynicism about Christmas all the way through the movie (my younger self would have loved it even more than me). That being said, it still retains and re-enforces, through horror movie syntax, the underlying true spirit of Christmas that almost every character in the film has forgotten. Which is where it almost hits a snag...

One of those ingredients I said was working against it is the fact that it’s a 15 rated movie over here. The accompanying certification card read something like, “sustained threat” or “intense threat” or similar... no violence or goriness was flagged up and I was kinda expecting to be let down a little bit when I read that at the start of the movie. Now, this may have been pre-cut by the studio a little, it’s true, because there’s very little blood, if any, shown in the whole movie. That being said, it’s so well edited and tonally consistent and honest in its horror tactics, that it still managed to be an extremely suspenseful and thrilling ride and, although I was expecting the violence to be a bit more... well splashier seems an apt word. It is kind of bloodless but, astonishingly, it doesn’t lose any bite in the delivery of the imagery and it does what horror films do so well with audiences... makes you laugh at the absurdity of it all before pulling you back into the terror of the situation.

Like I said, I’m guessing the studio maybe trimmed this movie back a little to get a lower rating so that kids could go see it... maybe something like a 12A certificate would have been more what they were aiming at. Well, in regards to that... there are some little edible delicacies in this movie that look just like gingerbread men but are actually, according to my same Swiss friend, called Grittibänz and many other names in various countries (such as Stutenkerl)... except in England or the US, where they don’t seem to have an English equivalent. So, anyway, just for the record... people of Hollywood, if you have little things that look like gingerbread men running around and firing nail guns into people’s legs, then you probably aren’t going to get away with a 12A movie... no matter how little blood there is. Also, although the film shows an absolute abundance of good taste in terms of judging things like shot set ups, camera movement, editing and so forth... there’s a heck of a lot of swearing and crudity in the movie too and that couldn’t have helped the rating decision either, I suspect.

However, like I said, the rating level on this movie certainly doesn’t seemed to have dulled down the impact of any of the suspense and shock in Krampus and, when a person finds oneself fighting something that is basically a small teddy bear with teeth that’s trying to eat them, it’s okay to stab it through the eye with an icicle as long as there’s no blood, right? Yeah, whatever... but it worked okay here so let’s not go there.

I guess what I’m saying is that the film, despite my suspicions of it being toned down for a lower rating, certainly doesn’t pull any punches and whether the character in question is an adult or a kid, Krampus and his ‘little helpers’ happily keep the body count going and you will find that not even small babies are safe from the clutches of these monstrous creatures.

I say that the film pulls no punches but, right near the end, there’s a sequence of events that some people may think is a real 'cop out', rendering the whole movie useless... all I can say without giving away any spoilers is, don’t worry, the movie won’t let you down when all is said and done... just don’t leave before it finishes. Ride it out until you get to where the end credits start because there are a few ways that this movie could have ended and it looks like the director chose three of them simultaneously.

So the movie was refreshingly good and, not only that, it also has a beautiful little stop motion style animation sequence at one point (when the grandmother tells her story and explains to her family what is going on) and a phenomenal, almost Elfmanesque score by a guy called Douglas Pipes which, although it’s available for download if that’s your thing (and it’s certainly not mine), is well worth a listen.  I’m told by Amazon.com that it's scheduled to be released as a proper CD early next year by La La Land Records... so I’m really up for purchasing this when the release date is upon us because, yeah, amazingly good score. It really lifts the movie and terrifies with some scary choral stuff when required. Douglas Pipes... job well done!

And that’s my take on Krampus. A surprisingly effective movie which shares a lot, tonally, with the original Gremlins movie and which, I suspect, may be complained about by overprotective parental figures just as much as the Spielberg movie was back in 1984. To sum up this review, though, I’ll leave you with an exclamation I overheard from a woman in the audience after the movie had finished which, frankly, is probably one of the best accidental recommendations I’ve heard for a film in a long time. Turning to one of her friends she said...