Come Play With Me: The Life and Films of Mary Millington 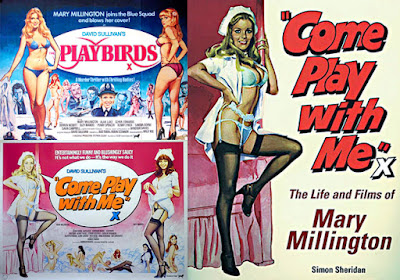 You know... I’m not exactly familiar with the work of model, porn star, sex entrepeuner, prostitute and Playbirds mascot Mary Millington... other than from her almost hushed but legendary stories from around the time I was growing up in the 1970s. I’ve never seen any of her movies, asides from a few minutes of some of her ‘early’ artistic (aka hardcore) work which can be found randomly streamed on sites of a dubious but easy nature... although I acquired two of her commercial features earlier in the year to watch at some point for a review on this site. I did remember two things though, which brought me to the point of considering reading this book.

One was the amount of British Sex movie posters I’d seen her featured in or mentioned on when I was a young lad of about 10 years of age. Posters for a lot of British sexploitation films such as Come Play With Me and The Playbirds, along with tonnes of non-Millington movies (usually sex comedies) were regular fixtures outside my local cinema as I used to admire the prominently painted assets of a number of talented young ladies on my journeys to and from various destinations. Also, there were many raunchy and related adverts pushing the same movies in the pages of Film Review magazine (anyone remember that?) and Time Out. Thus my awareness of the fairer sex, albeit a relatively skewed view, grew in leaps and bounds as the memories of the imagery haunted me in my sleep, taking up residence in my libido next to the likes of Caroline Munro, Valerie Perrine and Carrie Fisher.

The other thing which made me want to read up on her was the memory of a TV Documentary about her shown maybe 15 or more years ago, in which her general naivete and her fondness for checking up how much money she’d made in her sex shop at the end of the day... “Cashing up is better than sex.”... made an impression on me. So I was pretty happy when I found a copy of Simon Sheridan’s cool book, Come Play With Me: The Life and Films of Mary Millington, on sale at the Camden Film Fair earlier in the year with a cracking £5 price tag. This was money well spent.

As is expected, the book tells a tale of tragedy and naivete about a young lady who loved her mother, loved her lifestyle and who ultimately committed suicide at the age of 33 due to threats from both the police and the Inland Revenue. It also tells the story of how, through her love of sex and the free giving of it to friends and strangers at the drop of a hat, she became a staunch supporter, as should we all, of free speech and anti-censorship. This in an era of British history where we really did need to have both eyes open at the ludicrous and daily liberties taken by those in some small position of power from our personal rights and freedoms. Of course, as I write this, the irony that this country has flip flopped back again from a brief period of enlightenment to an even more draconian, intrusive, illogical and ultimately sinister brand of abusive censorship is not lost on me.

Sheridan portrays Mary, for the most part, as someone who was an innocent, just caught up in life. He touches on the fact that some of her business partners could perhaps be seen as exploitative of her talent and enthusiasm in the sexual arena but it also points out that she was always absolutely aware of just what it was she was getting into, embracing it fully and certainly, it seems, she never really let herself be exploited in any way... other than in the ways she most wanted to be. Her accumulation of wealth and the acquaintances she made are quite eye opening and, although a severe dent is put in her character towards the end of the book when a trait akin to a compulsive form of kleptomania is highlighted... ultimately she seems to have been a joyous and engaging young lady who cared very much about people and animals and who, perhaps, did not best express herself when she needed help in certain areas of her life... those which took her to her untimely death in 1979.

The book is both frank and playfully cautious in equal measure. For example, Mary’s sexual encounters with prime minister Harold Wilson, actress Diana Dors and several other celebrities are included in the pages of the book. Other people who played a part in her life have been left out or alluded to without actually being named and I’m guessing the potential publication of certain information in the book which is passed over or referred to more enigmatically... such as a ‘leading comedy personality’ who used to visit Mary for sex in disguise so he wouldn’t be recognised... might still be damaging or, at the very least, seen as defamatory, if they were revealed at the time of the publication of this book. Sometimes, if you piece certain information together from other parts of the book, you can kind of guess who some of these ‘friends’ of Mary’s were but, other times, it’s a little more difficult.

The book is really nicely written and it’s an excellent portrayal of Mary’s life. It also has a second, very large section of reviews discussing all of Mary’s non-hardcore feature film appearances. This section has some fascinating anecdotes and stories from the productions of these films, some of which were shot by prominent directors at the time (one of the main Bond film directors springs to mind in this context). It also touches upon films made after her death and which traded on her name and reputation. Come Play With Me was and still is, I believe, Britain’s longest running film showing at the cinema... running non-stop for years and making a tidy profit in the process. So you can understand why some of Mary’s past business partners may have wanted to capitalise on that after her death but, of course, this really is the part of the book where one can justifiably say that Millington, after her tragic suicide, really was being exploited.

This book was an absolute joy to read. Very sad, obviously, but ultimately a celebration of the life of its subject and, from what I can gather, a much more factually correct account than the TV documentary I mentioned above and certain other ‘biopic’ type films which were even farther from the truth. A really great read and a big thumbs up to the writer and to Fab Press for putting this one out. Not just thumbs up... but possibly other parts of the anatomy up too, as it’s fully illustrated throughout with shots of Mary and her colleagues. Certainly a recommended read if you want to find out the fascinating things which were happening in the early 1970s porn trade and how the participants in these things got their start. Really happy I stumbled across this one in my travels and, if you have any interest in the subject, it’s definitely one to pick up while it’s still out there, I would say.
Posted by NUTS4R2 at 19:21