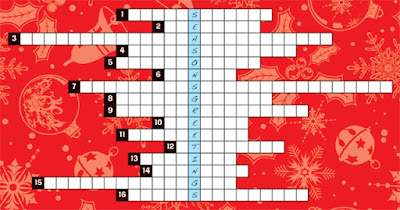 Since last years extra cryptic quiz seemed so popular among my readers, I thought I’d give it another go this year.

If you look at the grid above you’ll see spaces for 16 movie titles running horizontally and below are the cryptic clues to help you work out what these non-Christmas movie titles are. To help you out, I’ve filled in a line of letters downwards spelling out Season’s Greetings... so you have a letter in its correct position for each of the titles (a fair few of which are from movies released this year). Click on the grid to see a larger version of it.

I’ll probably award a small, strange or possibly customised prize (if I know you from Twitter) to the person with the most correct answers this year too... a NUTS4R2 first.

Email your answers to me at nuts4r2@hotmail.com and you have until the end of New Year’s Day (January 1st 2016) to get your entries in. A few days after that, I’ll stick up the name of the winner (or winners if it’s a tie), along with all the answers, here on my blog.

By way of an example, here’s a question from last year’s quiz, followed by the answer.

Example question: You keep banging on about a third of a dog!

Example answer: You bang on a drum. A famous Hollywood dog star was Rin Tin Tin... so a third of that could be Tin. Therefore, the answer is The Tin Drum.

If you keep checking back at the comments section, I may put the odd clue on every now and again to help you.

Full marks are rarely scored so if you’re feeling a bit stuck, there’s still everything to play for. Send me what you've got anyway.

Hope you enjoy playing and, above all, have fun.

2.  The fifth letter of the alphabet has its superhero costume cliché removed.

3.  A sudden, nervous muscular spasm aided by a really great external skeleton, renting a room with the precious metal that it’s married.

4. Massive soundtrack to accompany a lift (US: elevator) on its journey.

9.  The last curve of a backside looks just like a planet.

10. Ten down from Wolverine, Cyclops, Ice Man and the others.
Addendum: You know, depending on how you visualise things and count, some people might see this as "Nine down"... but whichever way you count it, "it's all for you".

11. More than casual acquaintance of the United Nations loses life.

12. Thinner was a great book by Stephen King but... what King book came out after it?

14. The tip of a candle protruding from the top of the toilet.

15. The father of the satchel was stolen by this character.

16. The dirt from this Apple Maciffied piece of Real Estate.