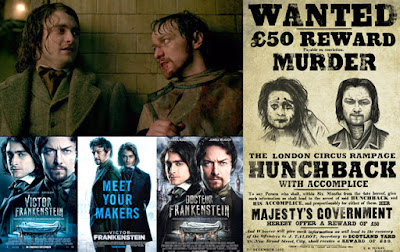 You know, I really wouldn’t blame any originally interested parties in seeing this movie if they passed it by after hearing the director’s promotional comments on this. I know I nearly didn’t. He seemed to somehow think he was doing himself a favour with his target audience by proclaiming Mary Wollstonecraft Shelley’s original novel Frankenstein, and I quote from many news articles reporting this... “dull as dishwater”.

This jangles the nerves and makes my blood boil for two different reasons.

Firstly, let us tackle the director’s apparent lack of being able to speak the King’s English. The phrase is not ‘dishwater’ it’s “dull as ditchwater”. I work in an Educational establishment at present and I am sick to death of people who can’t use English blaming their own lack of grammar, spelling and punctuation on the commonly held belief that language is a fluid concept and it changes over time. Well, yeah, it changes over time because dullards and half-wits can’t speak or write it properly and then other people who don’t know better also copy them. Think about it. Water found in a ditch is dull as a naturally occurring phenomena due to a series of geographical and scientific factors. It is endemic to the situation... whereas dishwater is something with which you’ve filled a dish. There could be anything in there and it certainly doesn’t have to taste dull or have a dull colour or texture. Honestly, people should stop using their ignorance as an excuse for what comes out of their mouths and own up to it when someone calls them on it... or when someone most likely doesn’t understand them because they’re not speaking the language correctly.

Secondly, I remember ordering a complete and unabridged copy of Shelley’s Frankenstein from the school book club when i was about seven years old (I still have it to this day). When I got around to reading it I certainly didn’t find it dull and I’m pretty sure a lot of people who revere this classic colossus of gothic fiction don’t find it so either. So putting down the wonderful source material in the hopes that it will make your product sound like a film which will appeal to the younger market (let’s face it, Hollywood wants youngsters to watch their films and raise the box office) is just insane and it will just alienate you from your potential audience, as it seems it has done on twitter (if my timeline of followers is anything to judge by).

So, okay, having said all that, it almost comes as a disappointment, in some ways, that Victor Frankenstein is a way more entertaining movie than it probably has any right to be. The thing is, yeah, it really doesn’t follow anything at all, almost, from the original novel... but if you’re going to let that kind of thing put you off seeing this movie then you’re probably not a fan of Frankenstein in movie history. Ever since Edison’s first Frankenstein movie in 1910 and onwards throughout the versions (and their sequels) put out by likes of Universal, Hammer and many more studios over the years, people have been doing their own thing with the Shelley source material, latching onto any number of elements and fusing it with their own take on the questions raised by the concept of going against nature and creating life from death.

So I’ve really got no problem with a story which takes the premise that Frankenstein (played by James McAvoy) allies himself with the aid of a circus freak, Igor (played by Daniel Radcliffe) who has as much, if not more medical knowledge than him. Actually, it is a stretch that Igor would be able to educate himself in the circumstances he finds himself in before the start of the movie but it seems credible within the context of the film which is all told through the eyes of Igor. Of course, Igor wasn’t even in the original novel but I’m guessing the director probably didn’t get that far into the story to find that out, being as it’s apparently as dull as something you might find in a dish, according to him.

When you’ve got performers such as McAvoy and Radcliffe, who have become masters of their craft (Radcliffe is surprisingly brilliant in this, even overshadowing McAvoy to an extent) then you shouldn’t have too much to worry about. Both sell this completely unrelated take on the story pretty well although, it has to be said, McAvoy does storm through the role like he’s high on speed for a lot of the time. Frankenstein is portrayed as deranged and McAvoy plays to that, sailing through the wordage at a rate of knotts, with Radcliffe not too far behind him. The Frankenstein character does seem a little over-adrenalised a lot of the time, though. It’s presumably a creative choice for the actor and it seems to have worked out for him here.

We also have Sherlock’s Moriarty, Andrew Scott (last seen by me in SPECTRE, reviewed here), as the Inspector who is hunting down both Frankenstein and Igor for reasons which make more sense once his religious agenda is brought into play after a while into the movie. He’s another, like McAvoy and Radcliffe who is very easy to watch and we also have the lovely Jessica Brown Findlay playing the romantic interest to Radcliffe’s Igor and, also, as the catalyst that brings Igor and Frankenstein together, in an impressive scene where Igor initiates a quick ‘dry surgery’, as the two work together to save her character’s life. It’s probably the cleverness behind the writing and execution of this scene, above any other, that won me over fairly early on in the movie.

I say that McAvoy plays the character in an ‘over-adrenalised’ way and I don’t think he could have got away with this kind of performance in some other films but, as it is, this film is so fast paced that the actors really almost have to run at speed with their performances here just to try and match the tempo throughout the piece. I may be wrong here but, because the movie staggers along at such a fast rate, I’m guessing that a heck of a lot of unnecessary dialogue may have been cut out of the movie as dead weight and we’re left with an edit that, while avoiding certain excesses that a lack of master shot use might bring, very much encapsulates a kind of pop video attitude and because of this, the film certainly doesn’t get boring. I'm guessing that this is very much a film which found its shape in the editing more than most.

Fans of Frankenstein's rich cinematic history may be delighted to discover that there are a fair few ‘fan references’ in the film (apparently the films can’t have been dull as either ditch or dishwater, then) and even the creature at the end owes a debt to the classic Boris Karloff portrayal of the monster in Universal’s 1931 Frankenstein and its first two direct sequels The Bride Of Frankenstein and Son Of Frankenstein (this also includes many mentions of 'Henry' Frankenstein, who was the main character name in the first two Universal pictures). There’s even a sense that it’s slightly filtered through Dave Prowse’s ‘look’ in Hammer’s Horror Of Frankenstein so that will probably please a lot of Hammer fans I would think, especially someone like Mark Gatiss who, I noticed, was playing an extra in the creation scenes towards the end of the picture.

So not much else to say really... Victor Frankenstein is a thoroughly, if surprisingly, entertaining movie. Fast paced with plenty of action... including a great ‘half chimpanzee homunculus’ rampage scene to get the blood pumping. There’s not too much in the way of anything other than standard camerawork throughout the movie, it seemed to me, but there were a few very expressive moments, like the first mesmerising scene right at the start of the film where we first see Daniel Radcliffe’s character almost forming out of the ether as some kind of German Expressionist legacy. All in all, though , there’s not too much to get upset about in this one... if you are a Frankenstein purist to the point where it puts you off seeing any deviation from the original work then, to be fair, not many of the movies made over the years would be for you. If you’re up for a punchy, ‘weird science’ adventure supported by a not too terrible Craig Armstrong score and some interesting performances, however, you might want to give this one a try before it leaves the cinemas. One thing I’ll say for it... it’s a lot less duller than ditchwater.