Doctor Who - The Husbands Of River Song 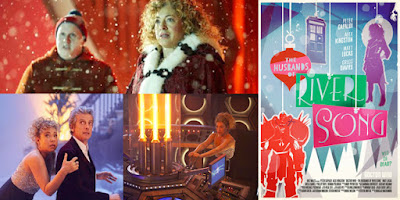 Well this is probably going to be one of my shortest Doctor Who reviews ever. Not because it’s the Christmas holidays and I need to be getting on with other stuff... I mean... well I probably do but this blog is my retreat and it always gets top priority from me, so I’ll write for as long as I need.

Nope, the reason is because there’s nothing much to complain about, again, with this episode of the show. It’s a pretty solid episode and, unlike a few over the past few years (and last year's also had this quality to it), it’s a bit of a romp. That being said, there’s also nothing much outstanding in the content of the episode either so... you know... liked it a lot and there’s just not much to say about it.

Okay, so there is some good stuff here and, maybe, just one bad thing but only bad because I wasn’t fully understanding the implications of it, I guess. Now, I hope you all don’t consider this as a major spoiler but, if you’ve got this far on your Doctor Who watching this shouldn’t come as any surprise to you. River Song is The Doctor’s Wife. She is also the daughter of two of his most cherished companions but I won’t say who here just in case people are only jumping on now. The first time the Doctor meets her, in David Tennant form in Silence In The Library, she sacrifices her life in the second part of the story to save The Doctor. After that, The Doctor continues to meet her out of order in time and space, and sometimes quite backwards, as they forge a relationship... one she’s already lived out over the years she has known The Doctor in terms of his first encounter, in his future of the timeline as we currently follow it.

This episode, for River, is set fairly soon after she sees her parents whisked away by the Weeping Angels and Matt Smith’s incarnation loses his two companions forever in The Angels Take Manhattan (reviewed here), although it’s not the last time The Doctor saw her... I’ll get to that in a minute or two.

This is, as I said earlier, a romp with one of River’s husbands in this being a diamond, lodged as shrapnel in the head of a cybernetic dictator of a planet and, once said head has been ‘lifted’ from the owner (in full working and noisy order) it’s all about getting the head back (for the malevalently pursuing body) while exploring how The Doctor and River get on in terms of Peter Capaldi’s current incarnation personality. As it happens, since River knows that a Timelord can’t regenerate for more than twelve incarnations, she has no idea that this Capaldi version is The Doctor. Of course, she doesn’t know what we, the viewers know, that The Doctor has had ‘a thing’ happen at the end of his last regular Matt Smith episode which allows him to carry on regenerating so, when The Doctor gets roped into Professor Song’s current shenanigans, she really doesn’t know who he is and, despite The Doctor constantly trying to make her realise who he is, doesn’t find out until pretty near the end of the story. This, of course makes for lots of humorous shenanigans as The Doctor tries and fails to spell out the obvious while River takes him for an idiot who needs to have things explained to him and, also, confessing a lot of stuff she certainly wouldn’t have told The Doctor if she knew who he was.

The best of these scenes for me was the ‘first entry to the TARDIS’ scene which writer Moffat has been trying to get around being similar to every other time a new companion 'does it' in the last 50 plus years of the show. He’s taken a lot of side swipes at it in recent years but this is one of the best because it’s The Doctor having to pretend it’s his first time entering a TARDIS... and he hams it up with relish and does it just as he’d like to hear it done, with a lot of sarcasm and at great length. Capaldi performs it beautifully, the direction of the scene and the way the camera captures it is beautiful and, of course, the irony is completely lost on River... which gives it a little extra punch. Nice stuff and certainly the best bit of the episode I reckon.

There’s also the ‘almost bad thing’ which is the poignant, almost downer of the ending where we realise that this is ‘the last night’ that River and The Doctor are together before he sends her back with a sonic screwdriver to meet his younger self (where she dies)... the punchline to that being that, on the planet where they are, night last for over two decades. So they have plenty of time to fix some of the unfortunate revelations about River’s perception of The Doctor’s character, revealed as the episode continues on. Now I found this last scene a little bit of a downer but also confusing because... well... if you all can remember back to the Matt Smith episode, The Name Of The Doctor (reviewed here) you’ll also know that she’s also met him again ‘after’ her death. Something which isn’t explained after her personality was downloaded into the library via the sonic screwdriver The Doctor gave her (apparently in this very episode I’m reviewing now) but which certainly means, as far as I’m concerned, that she can come back anytime in the series. Of course, since Moffat has left Orson Pink completely dangling as a loose end, it certainly doesn’t mean River will return again but... well... River Song’s a popular character. We’d all love to see her back again as soon as possible, I imagine. Preferably with The Paternoster Gang in tow but... that’s another issue.

But that’s about it from me on this one. Not much to say. Enjoyed it. A nice dessert to what has been one of the best series of Doctor Who in quite some time so... yeah... The Husbands Of River Song is a nice little story in the continuing history of the show. Nothing more. Nothing less. And as for next year... we shall see what we shall see, I guess.
Posted by NUTS4R2 at 11:15