Alice Through The Looking Glass 3D 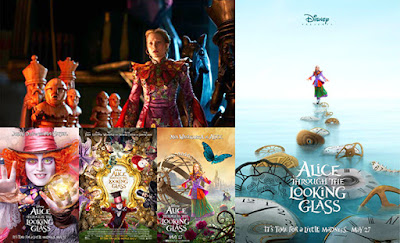 Hmmm. Okay... I didn’t like the Tim Burton version of Alice In Wonderland much. I didn’t review it at the time (I think it just missed the birth of my blog by a whisker) but I did do a short review of Danny Elfman’s score when I was trying to write about music (which you can read here). The score was a triumphant masterpiece, as far as I was concerned. The movie, however, was overdone, emotionally inappropriate in the wrong places and just seemed to me like a Hollywood contrivance which the audience ‘better like, or else’... if you know what I mean. So why, you may ask, did I go and see this sequel?

Well, as much as I love most of the actresses and actors in these two movies, it wasn’t their presence that got me back into the cinema for this one. Neither was it the director... not Burton this time, although he did produce this one. No... the blame for me having to endure this slightly better but, in no way any good, sequel has to be placed fairly in the lap of the aforementioned Danny Elfman. He’s back to score this one and I really just wanted to see what he did with the musical follow through.

Now, I can’t remember if I ever read Lewis Carrol’s Alice In Wonderland sequel, Through The Looking Glass, as a kid but what I can tell you, and you can work this one out for yourselves just by watching the trailer, is that this one has almost nothing at all to do with the original source material. Other than the same characters are back and there is, actually, a looking glass that transports the movie’s title character back to Wonderland. If I further told you that this movie starts off with Alice in the real world performing large scale stunts with her ship and her crew to evade the chasing pirates... you might realise how far afield this is from what you might reasonably expect... although this opening sequence is quite strong, to be honest.

If I further told you that the main plot involved Mia Wasikowska’s Alice stealing a time travelling device from Time (played by Sacha Baron Cohen) and then using it to travel through the past in Wonderland to solve the mystery of the Mad Hatter’s missing, presumed dead, family and defeating and resolving the childhood issues of the Queen of Hearts... then you have certainly been fairly warned that this movie is not for anyone who is expecting a half decent adaptation of the original classic. However, I can’t place the blame for this entirely at the fault of the writer and director since, if memory serves, a lot of the core of the original novel was already sourced and twistedly used in Tim Burton’s prior movie... so I’m guessing there wasn’t really a lot left to play with, to be honest.

What I do know is that, as good as actors like Mia Wasikowska, Helena Bonham Carter, Anne Hathaway and Johnny Depp are... they really can’t do much to save this movie and its unfortunate inheritance by way of the last installment. Alas, Depp once more portrays the Hatter as an emotionally involved and sympathetic character... putting on meat where there was originally nothing but bone and continuing to do something completely different with a character that was probably not meant to be given any depth, anyway, to speak of. He plays an interesting character well, once again, but this really isn’t the Mad Hatter (I’d like to see him try his hand at The Joker in a Batman movie sometime, though).

The spectacle of the thing, however, is truly great and the special effects team, concept artists and everyone else involved should be congratulated on a really splendid vision making its way to the screen. Unfortunately, this only goes to prove that you can marvel at something but still feel empty because it’s not supported by an entertaining or especially well written story. It makes things bearable but that’s really no substitute for a tale that pulls you in tight, hugs you to its bosom and doesn’t let go until the final credits begin to roll. I feel bad about the cast and crew going to all that effort to pull this one off because, frankly, as splendid as it looks it really doesn’t do much to stir the blood... which is always a shame after everyone has obviously tried so hard to make it work.

The only real take home, again... and it is something I will literally ‘take home’ because I’ll order the CD... is Danny Elfman’s amazing score. Once again he weaves his brilliant Alice theme into the texture of the score and, once again, comes out with something both appropriate and pleasing to the ear in support of both the movie itself and, I strongly suspect, as a stand alone listen. Fans of the lyrics of the song, however, are forewarned that only one word, from what I could tell, of the lyrics makes its way into the score and then, only right at the end. I’m guessing you can probably work out which word that is already, though, if you’re a fan of the song. I won’t confirm that here.

At the end of the day, Alice Through The Looking Glass is a surrealistic ‘romp’ through time as our heroine strives to find the solution to the Hatter’s problem and also, as you would expect, gains strength from her adventures when she’s away from her fantasy realm. As far as I’m concerned, though, it really left me cold and in no mood to see any further additions to the story. Hopefully this one won’t become a franchise and the cast and crew can direct their obvious talents to something more interesting and captivating. Alas for Alice... this wasn’t it.
Posted by NUTS4R2 at 11:13