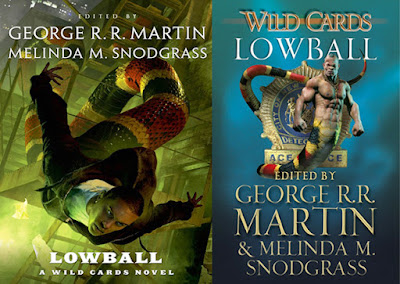 Warning: Very slight spoilers if you are
a regular reader of the Wild Cards series.

Wow. 28 years since I first started reading them and 22 novels in, the Wild Cards series of mosaic novels are still continuing to be published and this one, released towards the end of 2014 in its original hardback form, once again demonstrates that, despite the changing characters and scenarios inherent in a lot of different writers of different lengths of association with the series, there’s certainly no drop in quality. Lowball is a real page turner which has left me clamouring for the next novel in the series to find out what happens next... released sometime this year, or so it seems.

This one picks up with a lot of the same crew from the police station at the heart of Jokertown and from which the title of the previous book in the series, Fort Freak, was taken (and reviewed by me here). Like the majority of the volumes in the series, this one comprises lots of short story episodes by various writers but, once again, they are all working towards the same climax. Four of the narratives - Those About To Die, Galahad In Blue, Ties That Bind and The Big Bleed, are much longer stretches but they are all split into multiple installments and dotted between the other sections, used as both connective tissue and the main narrative path to the final showdown of the book between... oh, I’ll kinda get to that in a while... and as a kind of gathering of all the clues and adventures which are leading the book to its dark conclusion. Or lack of one, depending on your viewpoint.


This one is a deadly game and has real life parallels. Remember those awful ‘bum fights’ videos which were being sold illegally a few years back? Where tramps were made to fight for the purposes of gambling and selling dodgy videos? Well the plot line of the story is a parallel hooked right into that. Various Jokers are going missing from the streets of Jokertown and it’s up to the newly promoted Detective Frank ‘Franny’ Black to figure out what’s going on when the troubles are brought to his attention by Wild Cards regular Father Squid, the priest whose character dates all the way back to the third Wild Cards novel Joker’s Wild. Father Squid has enlisted the aid of Black Tongue, the deadly Joker hero from the previous novel but, by the time anyone in Fort Freak are taking the crimes that seriously, Father Squid and Black Tongue are also victims of the kidnappers, who are forcing Jokers to fight in gladiatorial combat for high stakes bets and for bootleg videos.

As usual, the novel features a whole load of characters from the entire history of the Wild Cards series, either as full on inclusions in the plot line...  such as Rusty, Drummer Boy, fan favourite Croyd Crenson (aka The Sleeper) and the aforementioned Father Squid... cameo appearances such as Dr. Finn the Centaur or Jube, the alien posing as a Walrus faced joker on Earth (Goo Goo Ga Jube... get it?)... or just as mentions/references by other characters... like Fortunato, Dr. Tachyon or The Great And Powerful Turtle. If you’re picking up one of the Wild Cards books for the first time on this one then, obviously, all these little nods to the past won’t mean a heck of a lot to you but, to long term readers of the series, it’s like catching up with an old friend and hearing about acquaintances long lost again... bound to bring a smile to the face.

While the novel is a lot of the usual fun and full-on barrage of beautiful little ideas that this series is best known for by its fans, there’s also a sense of urgency and almost desperation to the tale as it hurtles full throttle to its painful conclusion. A couple of regular characters from the series are... well, presumed lost (not necessarily dead... it’s a bit complicated to explain without giving away spoilers) and, given the series’ propensity to hemorrhage main characters on a regular basis, I’m already very much mourning their loss in the Wild Cards universe.

That being said, I was still expecting something of a wrap up to the story and, while it’s true, the climax of the novel when a very, very small cavalry rush to the aid of the Jokers, is absolutely taut and full of blood n' thunder, nothing prepared me for the ending of this tome which suckered me right into an epilogue which I thought was going to bring closure but, instead, put me on one of the most horrible cliff hangers since reading Patricia Cornwell’s Scarpetta book Flesh And Blood at the end of 2014 (reviewed here). Now the cliffhanger is taut enough but what it implies to me is that, the next book in the series is going to be positively dripping with the blood of the regular characters before I even open it up... soaked into every page if what I’m guessing is happening comes to pass. Now, it may not be true that I perceived the ending quite right because it’s been a very long time since I read the books in the series dealing with a specific character but, if I’m right, regular readers of the series who haven’t read this yet will want to look away from the next line after this...

... I might be wrong or misinterpreting the last paragraph or so but it looks to me like The Astrologer might be back... which will be the biggest single threat to the world of the Wild Cards universe - Aces, Jokers and Nats alike - for a good few decades.

So yeah, I absolutely cannot wait to find out just what happens next in the volume scheduled for 2016 called High Stakes. Meanwhile, if you’re a fan of the books then Lowball is another absolute classic. Like the others in the series, the fragmented nature of the contributions in no way diminishes the flow of the story and absolutely every segment feels like it belongs as just the next part of the story and, as usual, every chapter is a winner. So if you like the Wild Cards universe then you need to grab this one while it’s still around (given the fragmented nature of the series’ release from various publishing houses over the years). If you’re not a regular reader... well you’ll still love the Wild Cards universe but I’d advise you to start from the very first ones and work your way through. The rewards for long term readers in terms of post modernistic referencing and the entertainment gleaned from that are... not something you'd want to miss out on.
Posted by NUTS4R2 at 19:46