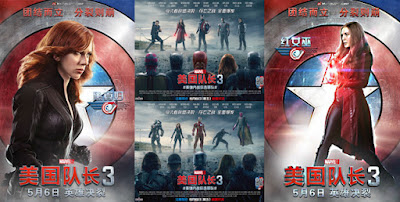 Okay... trying to make this one spoiler free is hard because I can’t talk about specific things which are significant firsts in the cinematic iteration of the Marvel Universe but... I’ll give it a go.

First up, though, I’d like to throw up the familiar caveat on this one that I’ve never read the Civil War storyline in the comics. I think that’s only about ten years old and, frankly, most of the Marvel comics I’ve read date from the very late 1930s (October 1939) through to the 1980s. That being said, my understanding is that this movie is not exactly an adaptation of that storyline anyway. It would need a heck of a lot more characters from the Marvel Universe in it, for example, and the company producing this film doesn’t have the rights to use all of them. So any fans of the comic book which this is ‘inspired by’ may well be a bit angry at the way it’s been approached, is my understanding.

I’m feeling a little conflicted in reviewing this one, to be honest, because my recent reviews of Avengers - Age of Ultron (reviewed by me here) and Ant Man (reviewed by me here) were not all that enthusiastic about the product but I did find that on subsequent viewings I enjoyed them a heck of a lot more and I think, maybe, my brain needs more than one showing to process what’s going on in these and be able to appreciate the finer points of them. So, although I don’t exactly feel like going back for a repeat viewing of this one right now, I won’t be too hard on it here. Although I wasn’t exactly blown away by it, I can tell you that much.

That being said, Captain America - Civil War is far from being a terrible movie and, to be honest, any problems I have with it probably stem from the fact that I was expecting a really great movie and... it really isn’t. What it is, however, is a very good superhero movie which takes the subject seriously, possibly a little too seriously at some points, and therefore doesn’t let the side down when it comes to both credibility in its approach to the sci-fi/fantasy elements and it support and progression of the overall story arc that is unfolding in what has now become known, it seems, as the Marvel Cinematic Universe (or MCU) in terms of the Phase One, Phase Two and Phase Three movies.

This film deals with a serious issue which is the United Nations trying to put a stop to the vigilante attitude of the super beings who have made themselves the unofficial police of the world, and the thin line between saving as many lives as possible or waiting for a committee to make decisions before you go out and do that... more often than not, a decision which is going to be made way too late to save the lives that needed it. So it’s about Law Vs Justice/doing the right thing with Iron Man, The Vision, Black Widow, Black Panther, War Machine and Spider-Man being hastily recruited to stand for the Law... while Captain America, The Falcon, Scarlet Witch, Hawkeye, Ant-Man and, by default, The Winter Soldier... are on the side of the latter. I’d have to say my personal choice would be for doing the right thing over the Law any day but I can appreciate that some strange individuals might not see it the same way. I think the film kinda takes that tack too, actually, because the issue is quickly ignored by Iron Man when the true villain of the movie is revealed (or one of them... I think they’re holding back on revealing the motivations of a couple of characters who are in this movie, as yet).

Actually, the main issue which is the heart of the film, the ‘vigilante mentality’, is something I’ve only personally experienced in comics from DC, in Watchmen (which had a pretty sound movie version) and The Dark Knight Returns (maybe one day somebody will be brave enough to greenlight a movie version of that) so I was surprised that the dialogue and emotional beats of this movie were so well done in the Marvel Universe. And its these quieter scenes which are the best ones of this movie. A lot is revealed in the sub-plot which is actually behind the scenes on the big issue in this film... although I was surprised that it wasn’t spelled out here (maybe they’re waiting for a twist revelation later on down the line). However, we see certain life defining events from the history of one of the Marvel movies’ best loved characters and how it all impacts on modern day events. We also have a nice little scene with a CGI recreation (presumably) of a young version of one of the actors as he shares screen time with his parents... which was a nice touch.

Other nice continuity things are the second appearance of William Hurt as Thaddeus Ross, after his original appearance in The Incredible Hulk. I think he might well be set up as a super villain at some point in these films... and maybe they’ll go with the comics and he’ll eventually become Red Hulk, who knows? This, along with numerous references and a certain kind of closure on one of the characters make for some compelling viewing.

However, it’ the action scenes which, in some cases (not all), suffer quite a bit. There’s lots of hand held, in your face stuff with a quite aggressive editing style but, in certain scenes, there was way too much to take in and the editing was such that, at some points, I was completely unsure of what was going on and what I was looking at. Which is a shame because I think the action scenes on these films are often big draws. And, also, although there was a fair amount of humour in the movie, I felt that it was just a little too sobering and somber as a whole. Granted, the issues being explored in both the converging plots don’t exactly allow for a lot of laughs but I think the scripting for this was... well... it wasn’t having a lot of fun, put it that way.

Black Panther was a lot more successful as a character than I thought he would be, although I did struggle to understand him a lot of the time... the accent was just getting in the way too much for me, I found. That being said, although I’m not particularly looking forward to it, I suspect the idea of giving him a stand alone movie may not be doomed to failure, as I at first thought, so we’ll just have to wait and see what happens on that one.

Spider-Man, on the other hand, left me quite torn. All the cast regulars on this... Chris Evans, Robert Downey Jr and all the rest of them, are all absolutely brilliant in their roles, as you would expect, As is Daniel Brühl as, a version, of Baron Zemo. He’s always good to watch. Martin Freeman seems completely underused and has a ridiculous American accent but... I think his role hints at more to follow so... maybe this is just a set up. And Tom Holland’s new version of Peter Parker/Spider-Man is equally at home in the mix, displaying great chemistry with the other actors and working well in the situations he finds himself in. He’s great in the role but unfortunately, to my mind at least, that role is not The Amazing Spider-Man.

That is to say, the way this new version is written seems a little too at odds with the character as it was in the early 1960s and, for some reason, the writers seemed to have replaced humourous wise cracks with inquisitive geekiness. Also, as great as Tom Holland is in this, he’s the first version of Peter Parker in cinema that, really, doesn’t look like any of the comic book versions of Peter Parker that I’ve known through the years. Still, hopefully they’re still finding their feet with the character and the writing will evolve a little in his next cinematic outing. That being said, they do introduce a concept in one scene which is something which was very much used in those early days of the comic book and which, I believe, is the first time it’s been used in a cinema version of the character... I won’t say too much about that but, stick around for the post credits scene folks. There are two again on this movie... one in the middle of the end credits and one right at the end.

My other main complaint on this one was Henry Jackman’s score. It’s fine and does what it needs to do and... it’s probably a good stand alone listen too. However, it also highlights one of the continuing failures of the Marvel Cinematic Universe... that of a cohesive musical support via leitmotif. Yeah, I know, different artists and different people doing the inking might be a nice comic book analogy you could use to justify the use of music in these but, honestly, that really doesn’t cut it with me. I thought the last few Brian Tyler scores for the series had some nice work in trying to bring everything under one banner, especially his score with Danny Elfman for Avengers - Age Of Ultron, which I thought really did a lot to weave some of the recent movie’s musical identities together. In this one though, unless I missed, it, there are no straight quotes of the Avengers or Iron Man sub themes and I felt this movie really needed it. As the film progressed, I was more and more missing the familiar musical glue which would have brought me closer to the characters emotionally through the emphasis of their themes but... unless it was buried under the sound mix (and that’s entirely possible), I wasn’t aware of anything that relevant happening with the scoring on this one. And that’s a great shame... it’s a bit of a step backwards, for Marvel, I think. The music to these (and all) movies is pretty important and I wish the producers at Marvel would finally start to take the musical contribution a little more seriously.

Other than all that, though, it’s a fine film. Not great but, as I said, one which will probably get better and have more resonance on subsequent viewings, especially by the time the Avengers Infinity Wars films have both hit the screens. Not quite a classic Marvel movie and not in my top five of this series but, still, a nice time at the cinema. If you’re already into Marvel films then you’ll know you won’t want to miss this one anyway but, to be honest, if you’re not into these films and the way they interlock, you might find yourself having a harder task jumping into them blindly without having seen the previous films, at this stage in the game. Still, looking forward to the next one in the series, Doctor Strange, which should be out in cinemas in the Autumn. That should bring in a whole new element to these films, that’s for sure.
Posted by NUTS4R2 at 18:45