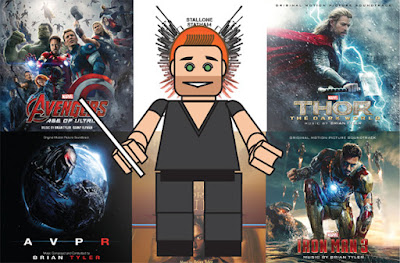 So again I found myself with the same dilemma as when I covered the Hans Zimmer concert (right here). I rarely do concert reviews and, a few weeks now after the fact seemed probably a little late. However, this was a truly great evening and, since it turns out that this was the great man’s debut concert, I figured I’d write a little appreciation of it here... plus a few minor criticisms thrown in for good measure.

Okay, so while I had a couple of Brian Tyler’s scores from before the end of the last decade, I really started to sit up, take note, and begin to enjoy the music of Brian Tyler when he scored the fourth Rambo movie, back in 2008.  I was impressed by what he did with that score and... a fair number of them after that. I’ve been steadily amassing a selection of this guy's albums since then because I feel he’s one of the truly genuine blockbuster talents of his generation. One of the relatively ‘new crowd’ like Michael Giacchino and Alexandre Desplat who are the modern day equivalents of such composers with the stature of the Herrmanns, Goldsmiths and Williams of this world.

The concert was pretty packed out and, when he came on stage and addressed the audience, I was amazed by how young he looks. He’s actually only a few years younger than myself but, trust me, he looks maybe 20 years younger than that, as I’m sure people must tell him all the time. More importantly, he seemed very laid back and friendly and he seemed to have a nice, fun working relationship with the Philharmonia Orchestra and the Royal Choral Society, not to mention two outstanding vocalists called Tori Letzler and Yael Shoshana Cohen.

He also seemed very energetic and enthusiastic with his players, moving around a lot (almost dancing as he conducted) and generally feeling the music as he went. I usually find his music quite orchestrally dense or layered but, unlike a few of his contemporaries who tend to deviate to cacophony when using a similarly crowded palette, his works are often quite beautiful and tend towards melody in surprising ways, sometimes. He really is a great composer and I’m happy to say that he managed to get his exact ‘Brian Tyler sound’ out of his performers that night. I was sitting not far from the front and I could feel the bass notes hitting me as the band played on. I was surprised to see him wearing headphones during the conducting and what he had playing on them was clearly audible from where I was sitting... he’s the first composer I know who has taken along his own ‘click track’ to conduct to, while in concert, which I found fascinating.

In between tracks, he would take the time to regale the audience with stories of his career experiences such as the time he got the call from Sylvester Stallone and he hung up on him, thinking it was a director friend doing a bad imitation. When he told of how his agent rang up to tell him he’d just hung up on Sylvester Stallone, he got a big laugh from the audience. Of course, that phone call got him the score to Rambo IV (reviewed here) and the three movies, to date, in The Expendables franchise (Reviewed here, here and here). He also confirmed my suspicions that this was his big concert debut, and pointed out his mum and dad who were in the audience to see him. So that was pretty cool and heart warming, I have to say.

He got through a vast array of stuff and packed in quite a lot, with gallons of music from his career including Children Of Dune, Thor - The Dark World (reviewed here), Iron Man 3 (reviewed here), The Fast And The Furious, Now You See Me (reviewed here and which still, criminally, has not had a CD release), Constantine and Aliens VS Predator: Requiem... along with a whole host of others including some excerpts from his video game scores. I was annoyed that he didn’t play anything from Battle: Los Angeles (reviewed here), Bubba Ho Tep or John Dies At The End (reviewed here) but he covered a lot of ground in one sitting. He even ‘world premiered’ three tracks, two from upcoming movies... which included the stupidly titled Now You See Me 2 (Seriously? This needed to be called Now You Don’t) and a lengthy suite based on his Marvel Studios Fanfare music, which I’m really hoping he makes available on CD at some point.

Now it wouldn’t really be one of my reviews if I didn’t have a few little grumbles and so, here we are...

When it was announced that he would also be playing a ‘Tribute to John Williams’, a composer I’d seen conduct his own stuff a fair few times, I thought it was pretty unnecessary, to be honest. We were there for Brian’s music, not Johnny’s, and I would have rather he’d played just his own stuff but... well that’s his choice. As it turns out the tribute was only one track long and it was the concert version of William’s opening title march from Superman The Movie. So my first proper grumble was that I think he took the track just a little too fast and, also, that he didn’t seem to be bringing out the detail of the music like he did in his own stuff. Which was interesting but, hey, people were happy with this so I’m pretty sure I’m in a minority here.

My second criticism was the playing order of one of the pieces. He opened the concert with the main theme to Thor - The Dark World but, during the second half, he played one of the slower, more emotionally charged pieces from the film, with vocals performed, so beautifully, by the lovely Yael Shoshana Cohen. Since the track was so far removed in placement order in the concert, I wondered how many people in the audience who were less than familiar with the composers score on this one would have realised that she was singing a kind of slowed down variant of that opening melody. I know the two friends I was with had no idea that this is what she was singing so it’s a shame that this didn’t follow that opening piece, I think.

My third grumble relates to the titling of a piece. When each cue was played, the title of the film in the original typography of that movie was displayed on a big screen above the orchestra... but when Brian played his opening from Aliens Vs Predator: Requiem... the second of the two AVP movies, it was titled only Aliens Vs Predator, which is the name of the first movie with a score by someone completely different. Nothing wrong with the music, however. Tyler’s score is pretty much the only saving grace of that film, which itself plays like Aliens and Predators have been somehow caught up in a bad teenage slasher flick. Lovely, Holstian piece though and, as usual in this concert, Tyler knocked it out of the park.

My fourth grumble was the encore... there wasn’t one. Which is almost a criminal act in a UK concert venue (I don’t know what they do in the United States and, I don’t care). I know it was Tyler’s debut but we clapped an clapped and clapped while he came out four times midst standing ovations. The audience were really working hard wearing their hands out for that encore but they didn’t get one. Alas, that wasn’t great but... well the rest of the evening more than made up for that, I have to say.

All in all, I’ve seen a great number of movie concerts over the years by a great number of maestros such as Williams, Goldsmith, Elmer Bernstein, Nyman, Glass, Morricone, Zimmer and a whole host of others I’m not going to list here. These people were/are giants and their music will enrich the minds of many generations to come. Brian Tyler came to England in his debut concert and he conquered the hearts and ears of the audience at the Royal Festival Hall (a venue I prefer much more, acoustically, to the Royal Albert Hall) and, as far as I’m concerned, he stood with the memories of these giants and more than held his own. An absolutely brilliant concert experience and all I can say is... if you get the chance to see him anytime, definitely get yourself a ticket, I don’t think you’ll regret it.
Posted by NUTS4R2 at 19:50